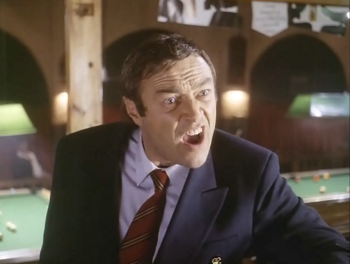 Okay, so maybe we didn't work the fanny pack jokes out of our system yet, and probably we never will, so shut up and get used to it already. That little pleather puss pouch is by far Jack's most defining characteristic anyway, and if it--hey, wait a minute, did we say Jamaica? Yes, we did. The movie actually does not take place in Jamaica--supposedly it takes place in Haiti, or some fictional voodoo-stricken evil paradise version of it. You can see how we might've been fooled though, what with the constant screen presence of dudes pretending to be rastafarians in every fucking scene. We're not even going to comment on the semi-blackface, because that's just eminently tasteful no matter where you are.

In fact, if movies had a middle name in addition to their title and tagline, Cyborg Cop's middle name would definitely be "tasteful". After all, what could be more dignified and proper than a robot arm butler named Michael that hangs up the phone for you? You don't even want to know what the arm in the bedroom does, but we will tell you that he calls that one "Indy".

The man behind the brains behind the arm is of course none other than John Rhys-GimliDavies, and he really earns his paycheck here as a demented, yet delightfully polite version of John Hammond, with a park full of robot arms, cyborg assassins, and more TV screens than you can shake a stick at instead of dinosaurs. Sounds great, right? Well apparently fun-hating DEA all-star Jack Ryan doesn't think so, since he decides to bust up the party by starting a shootout right next to the grenade factory:

Remember kids, if you're going to build a grenade factory in a war torn hellzone likely to be constantly assaulted by government forces, you might want to make sure it isn't in the town made entirely from gasoline, dried leaves, and big stacks of old copies of the Sunday Times.

But before Jack can blow the lid clean off this illegal haunted hayride operation or whatever is even going on, he has to contend with Quincy the Cyborg, a curious man-machine who you should probably avoid before he's had his morning coffee. Quincy is a fearsome cybernetic killing machine, who has his oversized cop-killer handgun pinned to his jacket like a pair of mittens on a third-grader. At least he's not obsessed with GREASY REBLEEP, SCALLOPS, GREASY SCALLOPS (REBLEEP) like some other jungle-dwelling automatons we could name.

Everything we've told you about this movie so far is just a side distraction, really. The grittiest, most realistic shootouts since the renegade Sunset Riders shot up the 16-Bit Saloon, the action scenes with more explosions than the actual Vietnam war, even the other cyborg cop we haven't mentioned who is basically Commander Data, Born Again...Hard. It's all just a charade building up to the real movie, Shinkicker IV: Death Rides a Dirtbike: