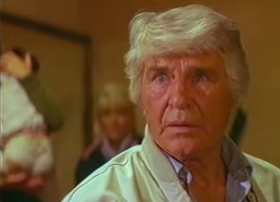 If you have no idea what the hell is going on, then welcome to the club. Supposedly this movie is about some kind of time travel, but the only comprehensible parts are pretty much a factory-default "family visits house in remote location, are terrorized by something or someone" movie. TDTE didn't even manage to get the terror part right, because it features a harrowing gauntlet of possibly the least threatening aliens, monsters, and alien monsters in all of movie history, ranging from:

That last one is by far our personal favorite, by the way. The USS Hover-Hoover, a.k.a. the vacDOOM cleaner[2], likes to play hide and seek, and then seek you by partially melting through your walls but then giving up. It also has a hard time getting up a flight of stairs, despite the fact that it can fly. Maybe it came from the planet Marlboro Red Dwarf and it's a chain-smoking spaceship. Let's all take a minute to appreciate the awe and wonder of the Dyson Human Eradicator (with pet hair attachment):

In the face of all of that, maybe it's understandable that Gramps has a little trouble handling the situation. On the other hand, let's just reminder ourselves that Grandpa looks like if Charles Bronson got caught in some kind of temporal slipstream in an Oldsmobile 88 and decided to stick his head out the window for a solid 20 minutes or so until it aged 3 millennia longer than the rest of him and then afterwards just continued to age normally some more so the rest of him was also pretty old looking too. In addition to making him look just incredibly old as hell, which we've hopefully established by now, this unique experience has also apparently given him some new and disturbing kind of super Alzheimer's which leads to symptoms such as:

So everyone is doomed, maybe, we guess. We don't know what's going on and neither do any of the characters, who spend most of the last 20 minutes of the movie in a perpetual state of "I DON'T KNOW WHAT THIS IS OR WHERE WE ARE, DAMNIT...BUT LET'S GO THIS WAY I GUESS!" We're not entirely sure what transition is actually supposed to have happened between the second and third 'acts' but it's pretty disorienting because whatever it is involves going from lots of totally inexplicable crazy shit happening everywhere all at once to absolutely nothing happening anywhere to everyone standing there laughing for no good reason.

Somewhere in there the moon and sun start having a binge-eating contest and swelling up faster than William Shatner in a mirror store, and by the end everyone's just kind of staring directly into the sun, which looks to be like 50 times larger than normal but for some reason isn't actually burning anybody or creating an exigent need to find a Sunglass Hut or any of the other shit you might expect a giant fucking sun to do, for example. Then suddenly everybody is laughing and smiling and they all march into the psychedelic bubble village from Zardoz (pre-Zed, of course.) This of course doesn't make an iota of fucking sense, but hey, why start now?

(Edit: a big, totally spite-free thanks to handsome internet bastard Neal Potter (@internet_chap) for suggesting this one!  If you have a movie that you're just dying to watch us suffer through, send us your suggestions!)

[2] Possibly related to the DOOMba?

[3] We like to imagine that this is a nervous trait he's been working on for years, and that he mainly likes to whisper in the ponies' ears every day that he could shoot them at any time. Hell, he probably names them based on how easily he thinks he could shoot them. "Whoa, easy Couldn't Miss Her, easy girl! Save some oats for Duck In a Barrel and Broad Side of a Barn!"