Ignoring the obvious warning signs, Dedra packs up her car and begins the drive to Las Vegas. Meanwhile, Cal also begins a trip to Vegas in a car he steals from a random family he kills. Both characters experience car trouble along the way and end up hitchhiking. The main difference is that Dedra just has a run of bad luck, whereas Cal kills anyone he can find, takes their car, uses it until it dies or runs out of gas, then starts all over again. It is inevitable that Dedra and Cal will meet up, considering they are taking the same roads to the same destination, and sure enough, they do. After an hour. One more time, there is a solid fucking hour of car trouble and hitchhiking scenes before the two main characters finally meet up and advance the goddamn story.

Eventually, Cal gives Dedra a lift through the desert roads. Dedra is immediately suspicious of Cal, which is fair, because he does look awfully out of place driving anything other than a nondescript windowless van with "FREE CANDY" written on the side. Before long, they lose a tire. Cal pulls over to fix it, leading to a perfect example of Ted V. Mikels's stimulating dialogue.

Cal: "Why don't you get out and stretch your legs?"
(Dedra gets out of the car)
Cal: "Where do you think you're going?"
Dedra: "To stretch my legs."
Cal: "I think you're staying right here!" 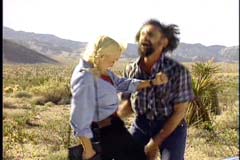 Dude, just be glad she only kneed your crotch. It could have been much, much worse.Dedra guesses Cal's true identity and nails him with some pepper spray before running off into the endless, flat desert. She hides behind the one outcropping of rock in sight, which is more than enough to throw Cal off the scent. He drives off, and Dedra then passes out in the middle of the desert, right next to a scorpion, which is always a good plan. Fortunately for her, some people find her and bring her to a hospital.

Meanwhile, Cal checks into a local motel run by a fellow with a truly ridiculous moustache. That's right, it's Ted V. Mikels, in one of his most mercifully brief cameos! Mikels notes the pepperiness around Cal's eyes and directs him to the hospital up the road. Of course, this is the same hospital where Dedra is being treated, and of course, a nurse tells Cal exactly where she is, right down to the room number. Cal disguises himself as a janitor and tries to kills Dedra, but she screams and drives him off. One has to wonder how this guy became so successful as a serial killer if he's scared of screams. It's a mystery.

Detective Mays finally catches up to the plot, finding Dedra in the hospital. He takes her to a motel room where she'll be safe while he hatches a brilliant plan to trap Cal. His plan turns out to be, "sit around and hope he calls." Fortunately, Cal does indeed call and reveal his location for no reason whatsoever. Mays goes to arrest him, and Dedra insists on coming along, because she's retarded. Unsurprisingly, within a few seconds of arriving at the hotel where Cal said he was staying, Cal steals Mays's gun and shoots him with it, then chases Dedra into the bowels of the building. She hides, but is discovered by Cal's twin brother Ralph, who has no reason to be there whatsoever other than to be mistaken for Cal and shot. Like magic, a pair of cops show up, and Ralph is mistaken for Cal and shot. Isn't it nice how things work out like that?

Even though Detective Mays knows Cal has an identical twin brother, and even though Ralph wears his hair differently and has glasses (as well as, presumably, a driver's license that says who he is), nobody figures out that they killed the wrong person. Mays, who was only shot in the leg, congratulates himself on a job well done. It was truly a brilliant strategy to get shot and lay there helpless while a couple of random, nameless cops do all the work of killing the wrong guy. 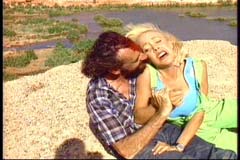 Our final image. Yaaaaaay.Dedra can finally breathe easy, but then - oh no! - it's Cal! He takes her out to the desert and prepares to kill her, but she slips away and bashes him on the head with a rock. She is about to drive off, never to have to deal with Cal again, but she decided to check on him for some reason. The right way to check on him would be to back the car over his prone body a few times. The wrong way would be to go on foot, unarmed, giving him the perfect chance to spring back to life and grab her. Now, given that it's broad daylight and Cal is clearly still breathing, which do you think she chooses? If you said "the right way," you are at the wrooooooong website. Naturally, Cal springs to life and grabs her. They wrestle for a bit, and then the shot freezes. No, the shot doesn't freeze on a final shock, such as Cal's eyes opening, or on his hand lashing out and clenching down around her wrist, it freezes after a few seconds of pointless scuffling. With that final disappointment, the credits start to roll.

For a Ted V. Mikels movie, Dimension in Fear isn't all that terrible. For any other movie, it's a piece of shit. Cal certainly looks the part of a deranged psychopath, but he takes out all his homicidal tendencies on bit characters to whom we have no emotional attachment, so we never give a flying fuck about anything he does. Dedra is a decent horror movie chick. She has a good scream, which is vital, but honestly, she never seems to be in that much danger. If Cal ever posed a real threat to her, she could just knock him out with the bowling balls inside her shirt, then sever his head clean off with her gargantuan incisors. Detective Mays, our supposed protagonist, is on-screen for a grand total of roughly four minutes, half of which he spends at the gym, and half of which he spends being terrible at his job. Add in an hour of useless scenes, a shaky video camera, horrible sound quality, and music so repetitive it makes an ice cream truck sound like the complete works of Mozart, and you've got a festively decorated turd of a movie that could only come from the mind of someone as detached from the way human beings operate as my favorite writer/director, Mr. Ted V. Mikels. Oh yeah, and why the hell is it called Dimension in Fear?