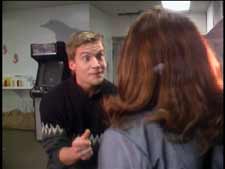 Steve shows off his "I want you back" face.Wayne forgets what he's doing again and wanders over to the nearby playground, where he meets an incredibly nerdy girl. She's depressed and desperate for companionship and it's obvious that she'd have wild nerd sex with Wayne if he so much as made eye contact. Instead, he mouths off about how violent movies encourage violent behavior. Damn, if he was any more charming, I'd need a moment to clean up. We cut to Billy swinging a drive in speaker on a long cord. That's basically all he does, there. What a terrific and necessary scene. Wayne and the nerdy girl make dork eyes at each other a little more, then Billy comes and kills them... somehow. Once again, Billy manages to kill two people without taking any perceivable action. He doesn't even use the freaking speaker, he just carries it with him. With that, the whole "will Wayne get any" part of the story comes to an abrupt end.

Fran runs into Jenny and tells her to go back to the snack bar and stay there. All Wayne really did in the movie was make Jenny go to the snack bar, and now Fran accomplished the same task. Ergo, the only purpose Wayne served in the movie was to die. Same goes for the nerdy girl and basically everyone Billy has killed so far. At the snack bar, Jenny encounters Steve, who had left Adrienne for wanting to make out with him too much. Steve immediately tries to coax Jenny to take him back by being as big a dick as humanly possible. He even sings a "time to dump my boyfriend" song. I swear to God. Jenny somehow resists the urge to knee him in the groin so hard that he sneezes children and instead asks him to escort her back to Mitch's van. While Steve is off being a jackass, Billy slips into his car and strangles Adrienne with the speaker cord. Of course, there was already a speaker at the car, so since he didn't use the one that he had to kill Wayne or the nerdy girl, there was absolutely no point to Billy having a speaker earlier. Christ, if the movie is nothing but a retard killing people, you'd think that much would at least be done well. Instead, this movie bites like a Chinese hooker. 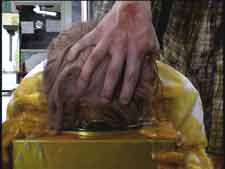 This picture makes me want to cry.Neil gets fed up with waiting for Fran and decides to take matters into his own hands. Billy sneaks into the snack bar through the back door using his secret stealth 'tard technique. The girl working at the snack bar goes into the bathroom and finds Rhonda's body, which Billy was thoughtful enough to hang on a coathook. Her screaming summons Super Neil, who leaps to her aid. Because she's a weak little woman, the snack bar girl is unable to handle the situation. With the speed of ten girly, girly men, Super Neil takes her keys and locks the front door! Using his incredible X-ray vision, Super Neil finds the back door and bounds off to lock that, as well! Emerging form the shadows, Billy kills Super Neil... somehow! Neil is the fifth person to die simply because Billy made a motion in his general direction. Billy then makes his way to the front of the snack bar and kills the snack bar girl by pressing her face into a vat of popcorn butter for six tenths of a second. Since I started reviewing movies for Something Awful only a few short months ago, I've seen people get shot, stabbed, sliced, chopped, hacked, electrocuted, hung, smothered, strangled, suffocated, burned, melted, blown up, run over, and drowned, but this is the first time I've ever seen someone die by butter. That has got to be the single dumbest way to die ever captured on film. I'm speechless.

Steve and Jenny arrive at the van. Jenny asks Steve to go out with her again, but Steve refuses, even though he's done nothing besides moan about how much he wants Jenny back since the movie began. They go their separate ways and find their separate friends' bodies. Like salmon returning to their birthplace to spawn and die, Steve and Jenny both run back to the snack bar, where they find Fran. Howard, the drive in manager, makes his triumphant "I'm still in this movie" reappearance by telling Steve and Jenny to lock themselves inside the snack bar while he goes to call for help. Billy isn't about to have anyone try to re-establish their character in his movie, though, so he breaks a chair over Howard's head. Jenny notices the snack bar girl's buttery corpse, and she turns to Steve for comfort. As the two teens cower in each other's arms, Billy chucks a claw hammer perfectly so that the claw end sinks into Steve's back. Sure, that's nearly impossible to do, but there's no reason a retard with no experience couldn't get it right on the first try. One thing does puzzle me, though. WHERE DID HE GET THE FUCKING HAMMER? ARGH! THIS MOVIE ISN'T COMPLEX ENOUGH TO NOT MAKE SENSE!