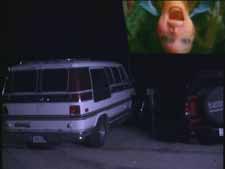 Look! Up there in the lefthand corner! It's an enjoyable movie. Oh, and that's Mitch's van. Sigh...Mitch drives up to the drive in box office in his van with his girlfriend Roxy, Wayne, and Jenny. The movie is already in progress. Wayne tries to romance Jenny by quoting imaginary statistics about the correlation between horror movies and violent crime. It's an absolute wonder that she doesn't jump his bones right then and there. Mitch gets into a fight with a token ebonics-spewing black guy over a parking space, but our lily-white heroes end up getting the spot. As soon as they're parked, Mitch and Roxy leap into the back of the van to partake in some remarkably loud, shameless sex, leaving Wayne and Jenny up front. Wayne tries to make a move on Jenny, but she shuts him down hard, which is no better than he deserves Jenny's way too hot for him. Moments later, a token hispanic guy saunters up and tries to sell Wayne some marijuana. Ah, minorities - with their comical accents and low IQ's, they can alleviate the tension in any scene! Meanwhile, two teens trying to sneak over the wall of the drive in come across Billy, who chases them off with a Morrow real estate sign. The two teens scale the wall, but quickly bump into a security guard. Being two bright young lads, they readily admit that they are in possession of pot. The guard kicks them out, but no sooner do they leave than Billy leaps over the wall and kills the guard with the sign.

Fran and Neil come home and find Max brutally murdered, but more importantly the place is an mess. I can't say I know how the house got so messed up. Billy left the house right after he killed Max, and the house was in good shape beforehand. I think Charles Debus is trying to get us to think about the chaos that violence perpetuates in our lives. It's a powerful statement about the mental turmoil that a mother experiences in the awful circumstance when her child is missing and there is evidence of bloody conflict, symbolized in the general disarray of the household. Also, this movie blows goats. 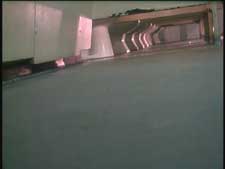 Camera angles like this are the reason I always check underneath the toilet before I sit down. I don't want my ass to end up on some crappy website.

The rest of the movie takes place at the drive in theater. Charles Debus tried to capture the realistic feel of a drive in by not supplying any additional lighting whatsoever. It's an interesting and stimulating technique that creates an atmosphere that I think Kurasawa would describe as "way too fucking dark to see." There are a few well-lit scenes at the snack bar, but otherwise, the movie is practically pitch black. As such, the rest of the review is going to be based largely in guesswork. For example, I guess Adrienne is trying to make out with Steve in their car, but he pushes her away. Apparently, Steve and Jenny broke up recently, and he's still uppity about it, so he decides to get over it by being a complete and utter dick to the nubile blonde that wants him for his body. You might think, "hey, Steve wants Jenny back! That's a one-way ticket to subplot city!" Well, it's not, so shut up. Over in the van, Wayne tries to cop a feel off of Jenny. She shrieks and thrashes in protest, but he doesn't seem to get the hint. When she finally manages to push him off, he tries to make an excuse for his behavior by saying, "Mitch said when a girl says 'no' she means 'yes.'" That infuriates Jenny so much that she leaves the van. That's what he gets for taking love advice from a man whose idea of satire is singing altered words to Barney songs.

Wayne runs after Jenny, leaving Mitch and Roxy alone in the van. Alone enough to be killed! Billy sneaks into the van and kills both of them... somehow. It's dark, and I didn't see anything in his hands, but he thrusts his hands in their general direction, and both Mitch and Roxy die. Oh well. In the next car over, Steve finally decides to let go of his heartache and make out with Adrienne. Just as things start getting steamy, Wayne presses his face up against the window and ruins the whole moment, proving that he is utterly incapable of going thirty seconds without pissing somebody off. Apparently he lost track of his earlier mission of finding Jenny to apologize for trying to rape her. All of you guys out there know how easy it is to forget something like that. When Steve hears what he did to Jenny (which Wayne was freakishly eager to tell him), he sends Wayne to find her again. 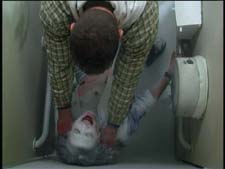 In "Drive In," this is considered an honorable and dignified way to die.

Jenny is hiding out in the women's bathroom, where she runs into Rhonda, the token black guy's girlfriend. They moan about their respective dates, then Jenny leaves. Rhonda goes into one of the stalls. The camera shifts away from her in favor of a pack of dental floss on the bathroom counter. It's just floss. The shot goes on for about a minute. Why is there floss in the bathroom? Is that what you ladies are doing when you take forever in the bathroom? Flossing? I didn't think proper dental hygiene was such a high priority among the drive in set. Once again, Charles Debus proves that he knows teenagers better than we know ourselves. Billy enters the bathroom, armed with a fire extinguisher that he got... somewhere. He pulls all the floss out of the little pack and bundles it into a thick rope. I think you can all tell where this is going, so I won't be offended if you choose to commit suicide rather than read the rest of this paragraph. Billy bursts into Rhonda's stall and sprays her with the fire extinguisher for a good long while, but in the next shot, she's only lightly dusted with white powder, so that it looks less like she's been sprayed with a fire extinguisher and more like she snorted her coke a bit too hard. Billy then strangles her with the wad of floss. As far as ways to die go, death by sign is pretty lame, death by floss is really lame, but there is one still to come that puts them both to shame.

We transition out of the bathroom via some more clips from Troma films. It is evident at this point that the movie on the drive in screen is actually a compilation of several other movies. That's pretty sad. Fran and Neil arrive at the drive in, having correctly guessed that Billy would only go one place after killing a homosexual. Once they park, Fran goes out to look for her son. Neil, however, is a puss and stays in the car, probably in order to design a gown for the upcoming Snow Queen dance. That's helping a lot, Neil, thanks. Fran doesn't get far before the hispanic guy tries to sell her some pot. That's right, kids, when you see your elected officials at the movies, the right thing to do is to sell them drugs! It's your civic duty! Remarkably, the token hispanic guy is unable to make a sale. He finds Billy soon after, though, and tries his luck there. There's just something about a gigantic man with blood on his shirt who drools on himself and doesn't talk that screams "approach me and make conversation! I won't kill you!" Long, boring story short: Billy kills him with his car's cigarette lighter.