After half the jury has testified, Wateesa postpones the rest of the trial until the next day, so that all the freed slaves can go to the first annual Hooray We're Free So Let's Indulge Our Former Masters' Sexual Whims Day feast. Despite the fact that there have been numerous exterior shots throughout the trial showing huge amounts of rain sweeping across the property, when the women go out to enjoy the stock footage-intensive feast, it is a glorious, sunny day. Even when it's night, it's a bright, sunny day. Freedom is weird like that. 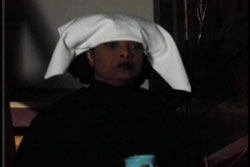 Sister Mary Shafonda never quite got the hang of her special nun-hat.Now, the women have been kicking and whipping Ted all day, but they don't want him to go and die on them before they have a chance to kill him, so they throw him, chained and bound, into his own basement and task one woman with guarding him. They even give her a spear, which I guess they had laying around for such an occasion. I don't want to go pointing fingers, here, but this woman is the worst guard ever. She has two jobs: prevent Ted from leaving (not a likely occurrence, since he's been so badly beaten), and prevent any vengeful women from getting into the basement to finish him off. Well, sure enough, a woman does come along looking to see Ted. She says she's a nun and she wants to bring him soup to help him regain his strength. After much cajoling, the guard lets her through. Unfortunately, it turns out that the soup is poison, and after forcing Ted to drink it, the fake nun proceeds to kick him for a good three minutes while screaming bloody murder. The guard never notices anything is awry, which I suppose is not surprising, considering she thought that a woman with a napkin on her head was a nun. 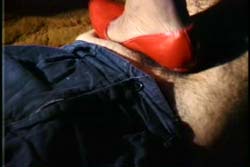 In the director's cut, that foot is about eight inches lower, and Ted's not wearing pants.Not long after the evil nun leaves, a whole group of women show up, wanting to see Ted. The guard doesn't even try to stop them. Naturally, they go down into the basement and kick him for a while. I mean, they really let him have it. They each take turns stepping on him with their heels, to the point where you can actually see the indentations their shoes leave in his fat. It is not pleasant.

Finally, after they leave, the guard goes down to check on Ted herself. Seeing him in chains reminds her of how he put so many other people in chains, so, you guessed it, she kicks him. Only, her heart really isn't in it. She gives him these lazy, half-hearted little kicks, as if to say, "I don't really like kicking, but Mom said if I don't kick, I won't get any ice cream."

I seriously considered counting the number of times Ted gets kicked by women wearing his wife's high heels in this movie, but then I remembered that I didn't really want to do that. But trust me, it's a lot. And it only gets worse.

Although Wateesa, Butra and several other women have already made it clear that the trial would resume the day after the feast, Mikels still seems to feel it's necessary to give us some stationary text to tell us exactly that. Despite their magnificent feast and incredible feats of kicking (get it? "Feats?" Ha!), these damn slaves still haven't gotten the hang of moving text. Oh well.

The rest of the women never get a chance to tell their stories. Instead, Wateesa explains that it's time to come to a verdict, which of course means that it's nowhere near time to come to a verdict. First there has to be twenty-five minutes of exposition about how they will come to a verdict (majority rules), and what it means if he's guilty (he dies), and what it means if he's not guilty (he doesn't die and also gets all his stuff back for some reason), plus time for lots of quality kicking. Gotta love that kicking. At long last, all the jurors vote. By a margin of eight to one, Ted is found guilty. Despite the massive majority already making the verdict painfully clear, Wateesa votes, too, with her own special dramatic music and everything. And she votes&. Guilty! Not that it would have mattered either way.

So, Ted's done for. Time to kill him, roll the credits, and go home, right? Well, not exactly. First they have to have another vote. For women who were slaves until yesterday, they have this democracy thing down pat. This vote is to determine the method of execution. The women come up with four possible options. 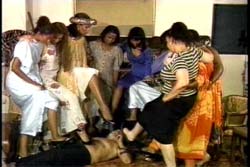 Really, no joke will quite do this justice. If I have to tell you which option wins, I hate you. Yep, after going over the options four or five times and reading each vote aloud, along with an explanation of its consequence, the women finally reach their decision to stomp Ted to death with their high heels. He makes a good show of pretending not to like it, but we all know what's up. Over the course of a full minute and twenty seconds, the women stomp down on him with their heels until he is finally dead. Then they throw their shoes at his body for good measure. And sure, why not, the guard woman comes over, puts a shoe back on, and stomps clean through his skull. Because shoes work like that. The end.

I'm all for people expressing themselves. Everyone's free to be you and me, or some hippy-dippy turd like that. But it's one thing to have a bondage fetish, or a foot fetish, or a shoe fetish, or a sub/dom thing, or whatever it is you get off on. It's another thing entirely to turn it into a ninety minute film. And it's certainly another thing to do it while sporting a ridiculous moustache. Ted V. Mikels has succeeded in making me, and presumably others, sit through an hour and a half of his sexual deviancy. Come on, let's look at the facts. He plays a character with no name who is shirtless throughout the entire movie, and who spends ninety percent of his time tied up and being teased, tortured, and titillated by a horde of black women in evening gowns and high heels. The fact that Ted's the only one who shows even a little bit of skin is almost more disturbing than if the women were flashing the camera left and right. Something's a little wrong, here.

Even ignoring his blatant flaunting of his fetishes, Mikels has put together a steaming dung pile of a movie in every conceivable sense. The sound is so horrendous that even when the women are yelling at the top of their lungs (which they almost always are), it usually sounds like they're mumbling into a tin can in a bathroom under the ocean. The film quality switches back and forth between terrible and painfully terrible with no warning. If there even was a script to this abomination, Mikels clearly didn't share it with most of the cast. With the exception of Butra, whose amazing Extend-O-Eyebrows prevent her from displaying any emotion other than irrational hatred, all of the women generally look humiliated to be there. Somewhere out there in the great expanse of space, there is a planet populated by cat women with giant eyebrows who wear high heels all the time. I truly, deeply hope that Ted V. Mikels might one day find his way there, so that they can kill him and harvest his moustache as a tribute to their crazy nine-headed alien god. Sigh& someday.