Ted V. Mikels is a crafty one, though. Where you and I see a basically complete story, thus eliminating any need for the next eighty-five minutes of film, he sees a need for a secondary, backup scrolling text intro! First, there is a shot of a woman, who turns out to be largely irrelevant, sitting by a radio, which regurgitates the contents of the introduction. Then there is another goddamn block of scrolling text. This one is mercifully shorter, and I won't bother reprinting it here, but suffice it to say, it doesn't tell us anything we haven't already read three times. And in case the Beowulf-esque introduction still didn't drive home the "black slaves capture their white master" premise, the characters repeat it fifty or sixty times throughout the film. 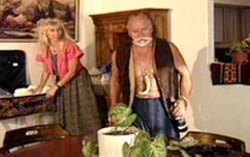 Ted V. Mikels, doing his best to look like if Willie Nelson ate Paul Hogan.In The Corpse-Grinders 2, Mikels played a wacky scientist. Here, he steps it up a notch - a sexy notch - by playing the shirtless white landowner, named (I'm entirely serious), "Landowner." That's right, old Teddy cast himself in the lead male role and didn't even bother to give himself a proper name. We'll analyze that decision a little later. We find Mikels in his plantation, which looks suspiciously like a house in the suburbs. His wife leaves, afraid of the slave revolt, and she urges Ted to come with her. He refuses, though. He knows he can maintain control of his plantation, the way all good landowners in Apartheid Africa did - by sitting around and counting his million dollar bills.

As promised in the intro, a representative of the new order, as portrayed by a park ranger, comes to the house and informs the slaves that they are now free, and the head slave, Wateesa, is now the "queen-ruler" of the household. Despite the fact that every single moment since the introduction has taken place at the landowner's mansion, only now does Mikels choose to place a title graphic, "LANDOWNER'S MANSION" over a shot of the house. 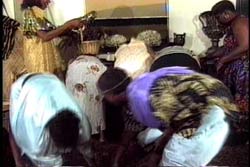 Let the blaxploitation... begin!When the slaves learn they are free, they go nuts, raiding Ted's wife's closet for all the clothes, jewels, and most of all, shoes that she left behind. Amazingly enough, every single one of the slave women have the same shoe size as Ted's wife. How about that for a coincidence? Wateesa, the head slave, takes particular joy in noticing that the high heels are solid enough to be rapped like a gavel. Seeing where this is going?

While the slaves fight each other over one dollar bills (and don't ask why this unknown African nation uses American currency), Ted sits in his nice, safe office, counting his millions. That is, it's nice and safe until Wateesa smacks him on the back of the head with a damn shoe and knocks him out cold. Didn't see that one coming, did you, smart guy?

When Ted wakes up, the slaves are in control, and Wateesa is their leader. She makes it very clear that she's the queen-ruler now, whatever that means. And when I say "very clear," I mean it. Case in point. 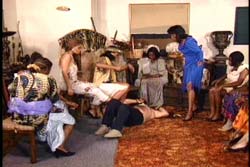 If you stare at this image for the next hour, you can pretty much say you've watched the movie. I wouldn't brag about it, though.Pretty much the rest of the film is spent in dragging out an insane mockery of a trial where the various female slaves yell at Ted and step on his chest, stomach, or crotch with high heels while he rolls on the ground and moans. Seriously. The women tie him up and make him lay on his back. Wateesa keeps one heel planted firmly on his chest for about twenty minutes straight, while she and the other slaves muddle through repetitive dialogue about how they are in control and are now running a trial. Honestly, there is probably a good three times more time spent talking about the fact that they're running a trial than there is time spent actually running one.

The slaves act as both jurors and witnesses, each taking a turn to tell their story of woe experienced at the business end of Ted's moustache. Whenever someone drops a line or gets lost in their own meandering story, Wateesa, or the jury spokeswoman, Butra, fills the dead space by feebly kicking Ted, eliciting a pitifully disguised sexual moan. Ted is at least smart enough to film the majority of the movie with his head facing away from the camera, so as to disguise the look of degradation-induced ecstasy that surely sends his moustache into palpitations every time one of the horribly embarrassed-looking women grinds a heel into his sternum. 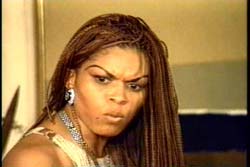 If Butra's eyebrows and Ted's moustache ever joined forces, humanity as we know it would be destroyed.The trial takes on a pretty standard pattern. Wateesa or Butra calls a juror/witness to give testimony. That woman then gives a largely unintelligible, painfully shouted diatribe about how the evil landowner deserves to die. Most of these stories are broken up either by kicking, by shots of torrential rain outside the house, or by a flashback to Ted doing something terrible to one of the slaves. Unfortunately, all of the flashbacks are ruined by a Superfriends­-style lens flare that pointlessly pops up midway through. It never fails. Ted will be raising his fist to a slave - bam! - Superfriends lens flare. He's pointing a gun at someone - pow! - Superfriends lens flare. He's writhing in coital joy while an ashamed black woman breaks a heel off in his stomach hair - nope, no Superfriends anything there, unless you count the episode where Wonder Woman hogtied Aquaman with her Lasso of Truth and made him call her "mom." Between each testimony, Ted and Wateesa have precisely the same exchange.

Landowner: "You can't take the law into your own hands!
Wateesa: "We are the law! The newly acclaimed law!"

Repeat as needed, contact a physician if you're still watching this movie.