Derek and Jared make good on their escape and find their way to a lake, where a woman is sleeping under a tree. Her shirt doesn't come off immediately, which can only mean that she is a main character. The woman's name is Alexis, and like the other two she's looking for revenge on Lucifer and his merry band of DayGlo-headed tricyclists. It turns out that all three have had family members murdered by the gang, a fact that is revealed through an assortment of flashbacks, because dialogue is hard.

With the battle lines drawn, the movie settles into a nice monotonous pattern of "protagonists break into some place full of gang members, long fight scene ensues, Lucifer is angry and increasingly thinks he's starring in an episode of Game of Thrones." At the beginning of the movie Lucifer was all "fuck you, pig" this and "I feel like killing something beautiful" that, but now he starts calling people "peasants" and dropping ten-dollar words like "imperative" and "expediently." During a scene that we're pretty sure was originally written for a movie about political intrigue in 14th-century England, he trades in the revolver that he started the movie with for an enormous sword that he uses to behead random people. Why not, we say? "Because it's stupid and ridiculous," you might say, but then you might just want to give up and admit this isn't the movie for you.

Gradually Lucifer learns that the only way to beat the muscle-bound white-guy protagonists is with his very own muscle-bound white guy, and so he reveals his secret weapon: BILLY IDOL, THE PERFECT FIGHTING MACHINE. His name is "Hellion," and he was created using "DNA from all the top fighters" and "a mixture of the highest potency steroids." Alas, Lucifer went with the low bidder when contracting out his secret weapon, and somebody seems to have spilled some tiger into the cloning vat:

Imbued with the power of large cats and performance-enhancing drugs, Hellion quickly captures Jared, who has to endure the agonizing torture of being whipped through a heavy leather jacket. We know it's the post-apocalyptic future and their dungeonmaster can't just pop into the local community college for an adult-education course on torturing prisoners, but this is just ridiculous.

Meanwhile, our other two heroes are planning to break Jared free, leading to one of the worst lines in cinematic history as Alexis tries to argue her worth:

ALEXIS: I'm a better shot than you! I'm faster than you! And what I lack in brute strength, I totally make up for in speed and agility! 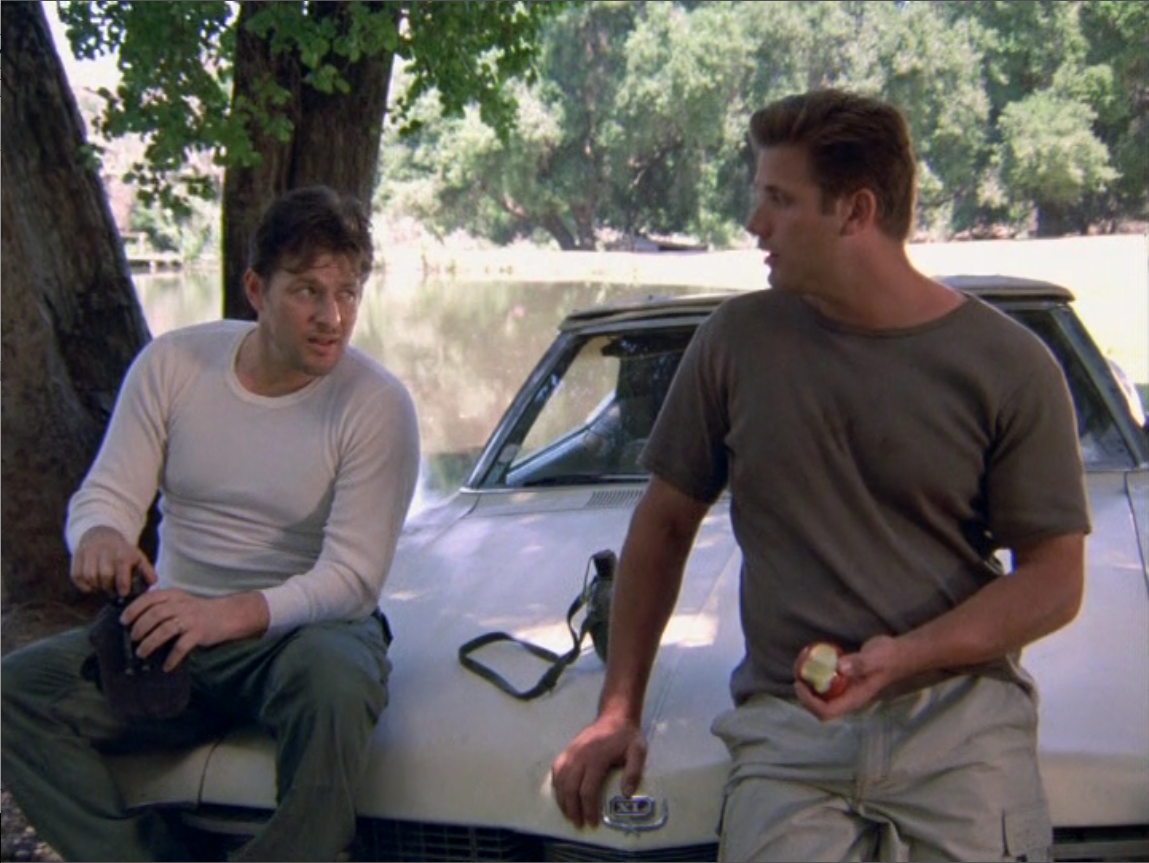 Derek and Jared: Three Times One Dragon Minus One.The actress playing Alexis stumbles toward the end of the line, but really, can you blame her?

Derek and Alexis go ahead with the rescue operation, only to run into Hellion again. The inevitable fight scene doesn't go so well for Derek, but speedy, agile Alexis saves the day by throwing dirt in Hellion's eyes, causing him to make a new and exciting noise that sounds less like a tiger and more like an elephant seal being kicked in the testicles. Then he gets bored and wanders off, as far as we can tell. We'll just call that one a draw.

Meanwhile, Kristanna Loken finally makes her appearance that is so heavily touted on the DVD case. Her duties consist of untying Jared, and then standing around in a bathrobe and watching him beat people up. Eventually he gets bored of knocking out nameless extras, and decides to go rescue Dr. Science and his plague cure. This leads to a big "climactic" battle involving all the protagonists and Lucifer, who seems to have forgotten how guns work from all the claymore beheadings; he spends the whole scene firing a shotgun up into the air.

Eventually an HO-scale model of the whole building explodes, courtesy of our heroes and a futuristic bomb they brought along. We can be certain that Lucifer survived the explosion, though, because he was running in slow motion down a hallway when it happened. If there's one thing that watching hundreds of B-movies has taught us, it's that any disaster can be survived as long as you run down a hallway, corridor or passageway in slow motion.