Dr. Plot Device safely makes it away to his family, and most of the gang members are blown to smithereens, but our protagonists are quickly confronted with Damien, Lucifer's brother and/or lieutenant. Damien shoots Derek in the back of the head; this kills our Replacement Dragon, but at least it doesn't mess up his pretty-boy face. A fearsome predator with a proclivity for wearing a tiny black cocktail dress and pretending it's really a shirt, Damien fights better than the other random gang members, but still only manages another interminably long stalemate of a fight scene that's broken up by Alexis and Jared escaping in their car to the abandoned set of some crappy Western. Damien follows them and arrives just in time for his death scene, which shows what happens when your budget puts having a fire suit ahead of having someone who can yell "oh shit" convincingly:

Lucifer shows up just after his brother's death, much to the surprise of nobody, and demands the vial of plague cure Alexis and Jared been carrying around. For some reason Alexis also has a syringe of the plague itself, so she jams the needle into Lucifer's neck, which causes him to stumble outside vomiting and, uh, turning inside out (possibly NWS unless you work in a third-rate haunted house.) With all of the bad guys finally vanquished, our heroes drive off into the sunset. Well, Hellion appears at the end to threaten a sequel, but we're pretty sure having all the actors sit at a bus station and beg for loose change for ninety minutes would have grossed more money than this movie did, so it's an empty threat. 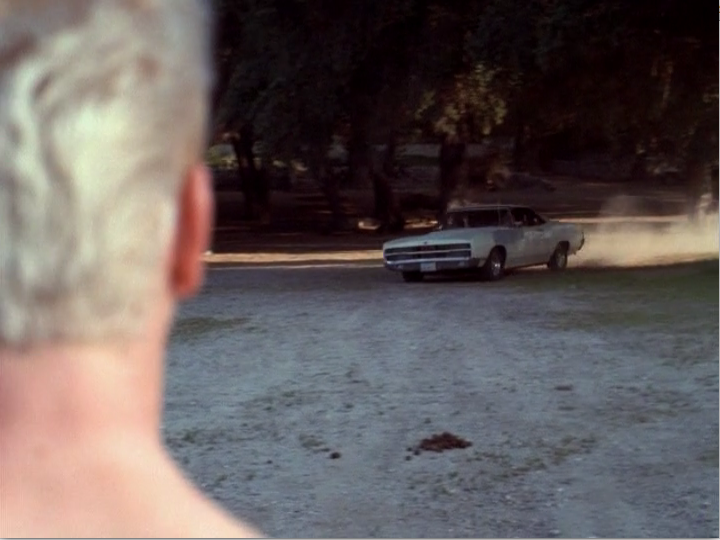 THE END ???Gangland is best described as a long parade of fight scenes, all of which are more or less the same. They could all unfold backward chronologically and it wouldn't really make any noticeable difference. There are no huge issues with the fight scenes themselves, though the transitions from gunfight to hand-to-hand combat are pretty flimsy, and some of the mid-combat editing was apparently done with a rusty wood chipper.

Everything between the fight scenes is either terminally generic (save the scientist who has a cure to the super-plague) or inexplicably weird (an Aryan ubermensch/steroid freak who can only produce tiger growls). And there's no excuse for having Jack Deth himself in your movie and then just having him stand around and wait to be rescued. But what really makes Gangland stand out is the terrible, terrible dialogue. As a reward for sticking through to the end, help yourself to some gems from the script that we couldn't fit into the review!

JARED: I wouldn't drink that if I was you!

JARED: You're not a duck.

DAMIEN: They broke into the food warehouse. They have a female with them.

LUCIFER: I want you to capture them all, and bring them to me. It is imperative that we catch these...peasants!