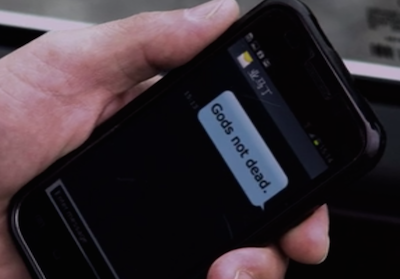 But perhaps we expected too much from director Harold Cronk and company. After all, who could reasonably expect anyone who freely, willingly casts Kevin fucking Sorbo as a rockstar philosophy professor in their multi-million dollar movie to be able to grapple with concepts like how the phrase "God is dead" isn't really meant to be read literally as some kind of atheist declaration of independence against the existence of a god? But hey, they got that guy from Duck Dynasty - you know, the one with the beard - to do an uncomfortably stilted soapbox cameo and drop some mumblecore scripture and painfully contrived 'iceburn' cue cards the director scribbled down for him to totally dunk on the hilariously phony smug atheist reporter caricature so hard that God decides to blast her ass with cancer. She might as well just kill herself anyway after getting crushed so thoroughly by somebody from fucking Duck Dynasty.

What's that? Oh, right, we almost forgot - as if making the most obnoxious/unrealistic professor ever the official spokesman for Atheism(tm) wasn't enough, they also decided to inject a sickeningly cloying subplot starring the most obnoxious/unrealistic reporter in cinema history (guess who she doesn't believe in!) who apparently spends her free time setting up really, incredibly retarded ambush interviews of Christians in which she spews the dumbest kind of mouth-shit only filthy Christ-punching atheists would say out of her word hole. Ridiculous and silly? Sure. Annoying to watch? Oh most definitely. Right up until they decided to give her fucking cancer.

Oh yeah. They went there. Just when you thought this runaway shitwagon couldn't race to hell any faster, the GND crew decided to drop a hard C on it. No. No, the other one. Better yet, this is only one of many appallingly tasteless moments God's Not Dead offers up, like the Muslim girl getting savagely beaten by her father for trying to listen to some Bible passages on her iPod, or any of the other hilarious and outrageously terrible deus ex machina twists where God decides to reach in and just straight up kill and/or torture all the atheists in the movie.

Whatever dumb, juvenile message the director was ham-fistedly trying to cram down our throats with poor lil' Josh Wheaton getting dumped on for believing in Jesus too hard (set of course to sappy shit-gargling Christian rock), it somehow rings a little hollow coming from the movie that can't scratch together a single non-Christian character who doesn't come across as either a vile, cartoonishly two-dimensional and irredeemably immoral crap sack, or a poor, innocent victim just waiting to be converted and embrace the J so they can finally be freed from the oppressions of the former.

As others have acknowledged, this movie is a goddamn trainwreck even by Christian movie industry standards, and well, we know what those look like, don't we? David A.R. White also occasionally pokes his head out from this steaming turd-hoard of self-gratification and biblical movie failure, but the black-white buddy movie subplot that involves him and another pastor pal literally trying to get to Disney World is so dumb and irrelevant it's not even worth talking about. Except for the part where they gleefully murder Kevin Sorbo, that is:

You might be wondering where we got "gleefully" from there, because it doesn't come across really well from the actors. Well, here's a direct quote from IMDB:

We rest our case.