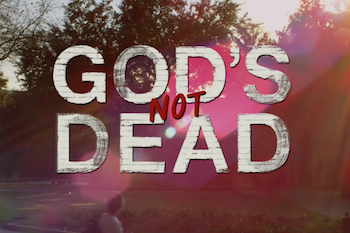 Overview: Evil atheist philosophy professor Kevin Sorbo threatens to beat up students and destroy their futures for disagreeing with him and/or not signing his "god does not exist" contract. Smugness ensues.

The Case For: This movie is about a hair's breadth away from literally setting up a line of straw men and just beating the everloving Christ out of it for 90 minutes. Note: this isn't really a "case for" unless you're a hardcore fundamentalist or you have an extremely specific and weird S&M fetish (or more likely, both of those.)

The Case Against: The assholes who made this were really hoping to drive home the point that "God's Not Dead", but the only message that came across for us was "God Damn This Movie's Bad". 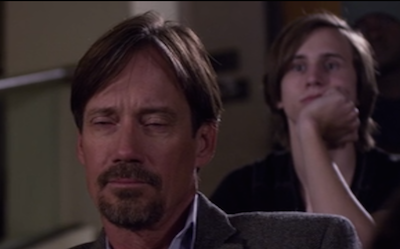 Have you ever wondered what it would be like to watch "Smug Christian Chain E-mail: The Movie?" Or wanted to watch a bunch of smarmy theists fumble with basic freshman-level philosophy concepts, only to have them slip through their fingers again and again like a greased-up hog at the county fair and then immediately declare themselves the moral victors anyway? Maybe you just earnestly believe that all those godless atheists, muslims, chinamen, etc. are just bitter shells of human beings that are incapable of understanding any system of morality, and you want to see them suffer and die horribly for not agreeing with your personal belief system?

God's Not Dead takes all of this and wraps it in an honest, sobering look at the state of the American college classroom, courtesy of a bunch of assholes who have obviously never been anywhere near one. Call us crazy, but the idea of being kicked out of all law schools forever based on getting a C in one stupid freshman philosophy survey class taught by a lunatic who openly grades his students based on their religious beliefs doesn't seem all that realistic or threatening. That, and most college lectures we've seen don't usually consist of Powerpoint duels between freshmen and professors based entirely on horribly out-of-context quotes where the winner is decided by whoever quotes the smartest-seeming group of people (and the Bible, because nobody's smarter than God after all.)

Kevin Sorbo - who as we all know has a long and decorated history of trying to beat up and kill various Gods on television - was the perfect casting choice for the militant atheist philosophy professor. Sadly, the odds are stacked against him here, and so we just get to kick back and watch him make a bright red goateed asshole out of himself for a couple hours while barfing out a rainbow of non-sequitur quotes and raging against the existence of Almighty G-dog[1]:

In classic Christian fantasy movie fashion, instead of trying to earnestly learn anything about the actual opposing ideas that they're trying so hard to tear down and demonize, the godheads of this trainwreck opt instead to grab the nearest copy of "Dramatic Philosophy 101 Quote Bombs for Dummies" and proceed to bludgeon those ideas to death through an increasingly polemical series of "debates" involving PowerPoint graphics which, hilariously enough, easily have the highest production values of anything in the entire movie. Expecting as one might from the title and the primary movers behind it, GND naturally makes the clumsy mistake of stepping in just about every puddle of terrible 12th-grade level philosophy classroom cliché imaginable. 90% of the thrilling "academic arguments" in the movie essentially boil down to this:

Evil Atheist Shitlick Prof. Kilgod von Hercules: Ha ha ha, stupid idiot Jesus boy. Stephen Hawking wrote a book once, about science, and it says many things, inside of it - how can you still believe in the magical flying Beardman?

Smarmy Dickhead Evangelical Student: Ah, but didn't some other famous smart person also once say that we can't be 100% sure whether or not there's forces at work in the universe that we can't yet explain? This is definitive, irrefutable proof that there is a GOD, and also that there's only one and he's the white all-American BIBLE GOD I learned about in Sunday school and that he died for my sins an-

EASPKvH: Guffaw! Silly little clown bitch, your mind is encaged in lies! Precisely what I would expect a pitiful frosh turd nugget like you to say, and I have prepared the following brainyquote.com selections to own you in front of everyone like the fucking slave you are.

SDES: Hmm, yes, all valid points Professor, but behold - a direct quote from the Bible which is tangentially related to the other stuff I was just talking about, which I shall read very earnestly and confidently as if it actually makes any meaningful point!

EASPKvH: Noooo! Lord Satan, I have failed you!

...and some more shameless out-of-context quote and/or name dropping in a specious attempt to cover up the hilariously, embarrassingly poor misreadings of basic, fundamental concepts and cornerstones of western thought follow, and on and on it goes:

Nevermind the countless geniuses and scholars who've been arguing and laboring obsessively over these questions for centuries - the Joshmeister comes in, leafs through a couple books real quick, and cracks the case before first semester mid-terms, unraveling all the mysteries of the universe and definitively proving that god exists. Noice.

[1] Not to be confused with G-Dawg, who sits in the fourth row of Psych 101 and totally slaughtered the beer pong tourney last weekend.