As soon as they get back, Valeria and Holden adjourn to the bedroom for a hearty dose of vampire-on-soon-to-be-zombie sex. She tells him to leave his mask on, most likely disguising the fact that he is played by the same actor who was the effeminate cop near the beginning of the movie. After the sex, Holden becomes a zombie and Valeria kills him instantly, completely ripping off a scene from "Dawn of the Dead." Killing Holden just gets her all hot and bothered again, so Valeria grabs Nemesis to help her out. The two of them go at it. I could give my thoughts on the scene, but I think I'll just give the words of my boss and mentor, one Rich "Lowtax" Kyanka, who had this to say: "Those were the absolute lousiest movie lesbians I've ever seen." Believe me, the man knows his movie lesbians. 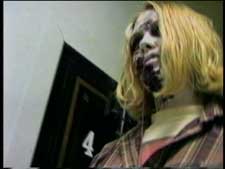 Hey, it's Argenta's sister! I remembered about her! Who said I didn't?

Back at the apartment building/lab/police station/mayor's office/whatever else Brian Clement needs this building to be, Dr. Oppenheim's old army friend returns as a zombie (once again, the whole "few weeks" thing doesn't really hold) and lets the other zombies out of their cages. The army guy zombie attacks Oppenheim. By "attacks," I mean "drops on his knees and plants his face in the doctor's groin." The actual bite occurs off camera, but it does not look pleasant. Another zombie actually has the pleasure of finishing Oppenheim off. I mean that in the killing sense, not in the fellatio sense. Although, we never see what they do with the body...

Tiamat, Argenta, and Shahrokh drive into the city to steal some ammunition. Naturally, zombies attack them, but Tiamat takes care of the situation. She does have a laser rifle, after all. As they leave, another zombie blocks their way. Even though Shahrokh just learned that Argenta even had a sister at all, he still recognizes her on site before Argenta does. Once again, Shahrokh waxes poetic for no conceivable reason, then Argenta blows her sister away. Well, that wraps up that weak, flimsy subplot! I'm sure glad Brian Clement took the time to add it in! Honestly, I didn't even remember that they were supposed to be looking for a sister. Whatever, at least this movie can end now. 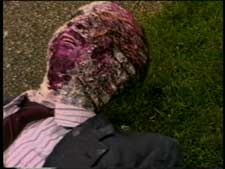 Can't we all just get along? The answer is no, no we can't.

Oh no it can't! There is no transition, but now everyone is back at the hideout. We see a bunch of zombies heading toward the secret entrance. They manage to break through Shahrokh's impregnable barricade, which consists of a single lightweight piece of wood that he himself has no trouble picking up and moving. Who would have thought that wouldn't stop the zombie horde? Argenta sets up a bomb and the protagonists all make a break for it, taking shelter in an adjoining room roughly three feet from the bomb. The explosion can be seen from outside the hideout, but everyone makes it out safe and sound.

Unfortunately, the zombies picked up a new tactic. One of them grabs Tiamat by the ankles from under the sand. I don't know how, but that somehow kills her. At least, she's never seen again. A huge number of zombies pop out of the ground and surround Shahrokh, Argenta, Valeria, Nemesis, and El Diablo Azul. The mighty fighters show off their prowess by standing perfectly still and shooting occasionally. The only exception is El Diablo, who doesn't believe in gun violence. He leaps off to clobber a zombie with his formidable shitty wrestling skills. Not surprisingly, he gets double teamed and decapitated. Oh well, tough man-titty. The battle rages on and on, and includes the same zombie dying multiple times. One of the zombies gets close enough to bite Shahrokh's arm. According to the timetables demonstrated in the movie, he should start turning into a zombie almost immediately. I guess he's got those few weeks, though, as the bite doesn't even slow him down and no one seems in the least bit concerned about it.

The scene just fades out, so we can assume that the heroes managed to kill all of the zombies somehow. Argenta buries El Diablo Azul's body, but not his head. That's really thoughtful, there, Argenta. One of the zombies suddenly starts talking, which is a major advancement in human-zombie relations. He casually explains that the time of man is over and that the undead legion is unstoppable. Argenta shoots him in the face. She just doesn't have a lot of tolerance for zombies, no matter how articulate they may be. And let's face it, for a zombie, anything more than "Aaaarrrrrrrgh" is pretty frickin' articulate. Argenta binds Shahrokh's bite wound, and they walk off into the desert with Valeria and Nemesis. As for Tiamat, well, no one knows and who the hell cares?

Before I really get into what's wrong with this movie, I want to take a moment to talk about what's right. Brian Clement is not a writer, that's for sure. The script is as weak as any I've had to suffer through. However, his direction isn't that terrible. He makes a few dumb, dumb choices along the way, but this is his first project. With a budget, someone else's script, a real camera or two, and some actors who can, you know, act, he might actually be able to pull off a watchable film. In addition, the makeup effects for the zombies are pretty damn good considering the tiny budget "Meat Market" had to work with. The faces look a little like papier mache, but the gaping wounds all look pretty cool. The problem is that the same few zombies keep popping up over and over again. There are only so many times one zombie can be killed before it starts to get old.

Now that the pleasantries are out of the way, let's get down to the major problems with "Meat Market." In short, everything I haven't mentioned so far. The actors can't manage to stay in character for more than a few words at a time. I believe the actor who plays Shahrokh is Latino by descent, and I can't even say what nationality his character is supposed to be, but he delivers half of his lines with a think Irish accent for some reason. I can basically guarantee that he's not supposed to be Irish. Argenta needs cue cards throughout the entire film. None of the actors can muster any emotion. A few of the extras can't even keep a straight face when they are attacked by zombies. The script is full of abominable dialogue used to hash out a script that is plagiarized from so many popular sources, I'm surprised that George Romero and Capcom aren't thanked in the credits. And then there's El Diablo Azul. Argh.