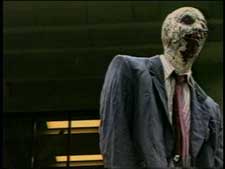 If you're a zombie on the move, think Armani.

Week Three - At their secret desert hideout, Shahrokh plays guitar while Argenta bitches about how their enormous non-perishable food supply that could easily sustain them for years is going to run out. Shahrokh keeps up the conversation just long enough for Argenta to have trouble remembering her lines, then they head back to the city to search for her sister. Following the two main characters would move the plot along too quickly, so instead we get to watch more random zombie attacks on extras. The mayor, played by Brian Clement's father, I believe, sits around in his office, talking to a cabinet of dead zombies. A bunch of cops sit along the walls, holding rifles, but when one of the zombies comes back to life, the mayor has to kill him himself. It's nice to know that the police force is so on top of things. Elsewhere, a couple of cops being pursued by zombies decide to put up a fight by blowing themselves to bits with a grenade and not taking any of the zombies with them. The effectiveness of the mayor's martial law is starting to become suspect.

Finally arriving at their destination (nameless generic building #12), Argenta wonders if the U.S. government would use nukes to stop the zombies. Shahrokh thinks about it for a second, which is just long enough for him to scare himself with thoughts of radioactive zombies. They get attacked by a band of chalk-faced skin-eaters, but the zombies are blown away by three female vampires with laser guns. Did you catch that? Wait, here it comes again - vampires with laser guns. How exactly did they get their hands on fucking lasers? Well, that's never exactly explained, but I do have one hypothesis: this movie sucks. Get it? "Sucks?" It's a vampire pun! Yeah, I hate me, too. Argenta, Shahrokh, and the vampires shoot their way out of the building and back to the car. Shahrokh suddenly waxes poetic for no reason whatsoever and they all drive off. 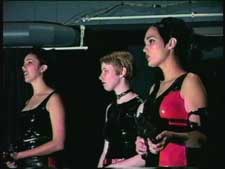 The next morning, they finally arrive at the hideout. The vampires moan about the brightness, but don't seem to suffer any negative effects whatsoever. The five new companions get out of the car and stand around under the blazing desert sun for a while in complete silence. Eventually, one of the vampires asks to go inside, so they all pile into the secret hideout under a sand dune. I swear to God, these are the worst vampires ever. They have no real problem with the sun, they never drink blood, and they carry freaking laser guns! Basically the only things that actually qualifies them as vampires are their fangs and their supernatural nonchalance, although that last one may just be a result of bad acting. If not, then they are the most nonchalant vampires ever.

After spending all night and the first part of the morning in the car with them, Argenta finally asks who the vampires are. They introduce themselves as Nemesis, Tiamat, and Valeria, A.K.A. the horse-faced one, the hot one who never gets her freak on, and the one who apparently fell into a vat of bleach. Shahrokh asks them why he and Argenta should accept their help, prompting the vampires to strike the worst attempts at sexy poses ever. Seeing that actually caused my penis to yelp in pain. When asked who he is, Shahrokh says that he and Argenta used to work for the zombies, then proceeds to explain how they didn't. They were bounty hunters contracted to round up test subjects for some company (*cough* Umbrella Corporation *cough*), but they left when they found out that the company was turning the people into cannibalistic zombies. Agreeing to join forces, they all make a plan to get in touch with others who can help. 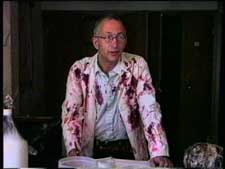 Learn to make your own zombies next time on "Bill Nye, Science Lunatic!"

In a run-down apartment building, a scientist named Dr. Oppenheim (points for creativity) checks on his personal collection of caged zombies. He gets into an argument with a nameless army guy who has been staying with him since his entire unit got killed. Oppenheim explains that headshots kill the zombies just like anyone else. The army dude gets pissed because no one knew that when they tried to fight off the zombies before. It really fills me with pride to think that the U.S. army tried everything in its power to stop the monsters, but never came up with the idea to shoot them in the head. The army guy storms out in a rage, leaving Oppenheim to his bad acting - I mean, work.

That night, the bounty hunters and the vampires split up into two teams. Tiamat, Valeria, and Argenta go off to find the vampires' contact, while Nemesis and Shahrokh join forces to get to Dr. Oppenheim. The latter two have a pitiful discussion about the merits of guns, then suddenly a zombie attacks them. Shahrokh shoots it roughly seven thousand times. Nemesis insists that he killed it and that he can stop shooting, then tells him not to get near the body because he didn't kill it. Then she kills another zombie with her laser blaster. I swear to God, this script is going further and further downhill every minute. 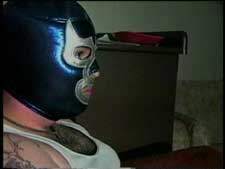 I really want to make a joke about this, but I simply don't have the strength.

Argenta and her two vampiric buddies meet up with a fat, hairy man in a tank top and blue luchador mask named El Diablo Azul. He wrestles zombies to their deaths using only his enormous girth and flapping man-tits. With two people switching off doing his physical work and a shitty, shitty voice actor providing a piss poor attempt at a Mexican accent, El Diablo Azul comes across as a laughable knockoff of Something Awful's own El Pinto Grande, only without being even remotely entertaining. On a nerdier note, he is also almost identical to El Diablo Verde, a luchador character featured in Children of the Night, a supplemental book for Vampire: the Masquerade. See the vampire connection? A little suspicious, eh? What? No, I swear to God I didn't know that from memory. I just... that is, I... uh... shut up! Tiamat and Valeria reminisce with El Diablo Azul for a few of the longest moment of my life. The vampires can't act at all, but hey, at least El Diablo can't, either. Among other things El Diablo can't do: move without shaking like a water bed, look at all convincing, and wrestle.

Shahrokh and Nemesis find Dr. Oppenheim, but he adamantly refuses to go with them or help them in any way. He claims that he's waiting for winter, when all the zombies will freeze to death. I can't say I really understand how creatures that are already composed of necrotic tissue could possibly freeze to death, but that's why I'm not a scientist. Oppenheim shows them his zombie collection and explains that he's working on a cure. He also tells them that the zombie plague is actually the result of nanotech robots that link all of the zombies together with a collective consciousness. Well, actually, he calls it a "collective conscience," but as anyone who has a decent grip of the English language can attest, THAT FUCKING DOESN'T MAKE SENSE! Oppenheim and Shahrokh debate the ethics of making cyborg zombies for a while, even though they're both on the same side of the issue. Then Oppenheim says something interesting: once infected with the nanotech virus, it takes a few weeks for symptoms of the zombie disease to manifest. Hmm, how about that? So how exactly is one to explain the shower girl who was bitten one minute and became a zombie the next? And if we're supposed to believe that the zombie problem wasn't that bad in the first week how could they possibly multiply so much in such a short time? And why the hell am I still watching this thing? 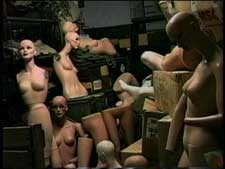 This shot has no point, but it is nonetheless the high point of the movie.

Argenta, Tiamat, Valeria, and El Diablo Azul make their way up the stairs of a decrepit apartment building. I can't explain why they're trying to go higher, since they want to leave, but at this point it's not even worth nitpicking over little details like the laws of physics and the fabric of time and space. Their journey is proceeding zombie-free until El Diablo just has to stop on a landing and open a door, alerting a whole mob of zombies to their presence. Nice on, Little Boy Blue. Maybe you could hold Argenta down while the zombies eat her, too. Shahrokh and Nemesis meanwhile hide out in a gym, where they have a long, pointless, aggravating discussion about each other's smells. Nothing keeps the action moving like a frank discussion of B.O., that's for damn sure! Nemesis clearly wants to sex him up something fierce, but their odiferous reverie is broken up by a zombie attack. Nemesis beats the zombie to a pulp with the free weights. Okay, so an entire army can't seem to manage to drop a single one of the undead, but Nemesis can kill one by poking it with a five pound lump of metal. Fine, whatever.

Meanwhile, Argenta and her pals come across private Holden, an soldier in an ill-fitting ski mask. He has a shoddily bandaged bite wound on his arm, but he passes it off as a barbed wire injury and no one questions it. El Diablo Azul is incredibly annoying because the character is so forced and fails on so many levels. Holden is incredibly annoying because he's a whiny little bastard who serves absolutely no purpose. I can't stand this guy. Every word he says sounds like he's plucking out his pubic hair one by one. All the same, Valeria all but jumps his bones right then and there. She manages to keep it in her pants long enough for El Diablo to beat up another zombie and the whole group to meet up with Shahrokh and Nemesis again. They return to the hideout. There's a trend in this movie - every time the characters go to the hideout, the script gets decidedly stupider. This is no exception. If you have a cyanide capsule, you may want to swallow it now. There's nothing but pain ahead.