Yor: The Hunter from the Future

Right now, you're probably thinking, "hey, I bet the last half hour of this movie takes place in some kind of futuristic Star Wars space city with robots and an evil guy." You're an idiot, but you're also absolutely right. It is now time to begin Act Four, wherein Yor: The Hunter from the Future stops being the movie it was before and turns into an entirely different movie. 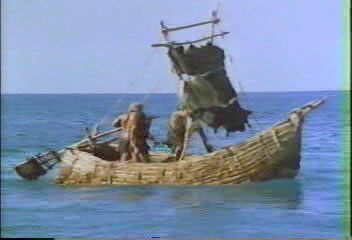 The violent storms capsize Yor's wicker boat (ah-duuuuuhhhh), and he washes up on the mysterious island we keep hearing so much about. But what's this? Somebody is watching him through a crystal ball! Yor stands motionless on the beach, looking in bewilderment at a big rock, plotting his next move with all the horsepower his sputtering brain can muster. His dumbshit reverie is interrupted by a bunch of robots who look like a cross between Darth Vader and a cabbage. He knocks one robot's head off with a rock, but the rest surround him and incapacitate him with a Casiotone laser.

Meanwhile, The Overlord, villain of this new plot (which is conspicuously made out of leftover props from an unrelated science fiction movie) is keeping his creepy crystal-ball gaze fixed on Kala and Grandpa Seth, who have just waded from the wicker wreckage. "I want them both captured and brought here," he says, in his best hammy space-villain seize them! voice, "alive!" 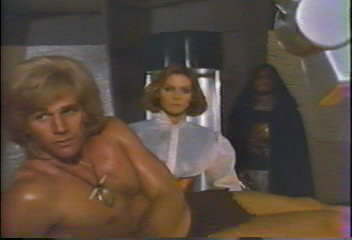 So, Yor is brought in alive, and stuck on a menacing lab table, James Bond style. Some lady, who we're to presume is good because she has a white outfit, explains to him that he's a native of this strange sci-fi subplot island, and that his special amulet tells them all they need to know about him. His name is Galahad, and he's the son of some rebel hotshot whose ship was shot down years ago while he was flying Star Wars ripoff runs over Beggar's Canyon in his T-16. Yor cares; we don't. This movie is fucking long.

The Overlord minces and chews some scenery. He's pissed because he can't find Kala and Grandpa Seth; he allows Yor to be released from his James Bond table, hoping he'll lead the baddies to his buddies.

Meanwhile, the buddies have been found by some guys in white outfits (meaning they're good), who explain that their once-great civilization was destroyed by an atomic blast, and now the Overlord is leading what remains of their proud people toward more and further destruction. At this point, I am seriously pissed off at this movie for trying to cram an entire second plot into the last half hour of this movie, because this is the densest exposition I've ever seen in my life. It's like eating an entire dry brick of shredded wheat, but cheaper.

The density lets up for a solid five minutes, and is replaced by the most fearsome tedium in the history of motion pictures. Yor sneaks around. His buddies sneak around. The overlord swishes around. Eventually, they all meet up in the same room in which they started, and The Overlord reveals his Fiendish Plan".

Somehow, I can't find it in my conscience to dignify this plot with a synopsis. The next fifteen climactic minutes can be told entirely with only a few lines of dialogue; just pretend that these are liberally interspersed with the most grating, high-pitched laser sound effects in the history of cinema:

"Those fools think they can beat me, The Overlord?" 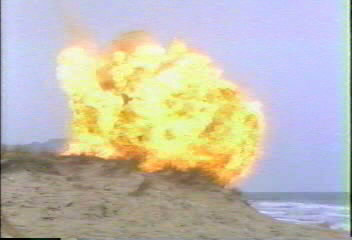 And so, the story of Yor draws to a close; Yor hops in a spaceship with his homeboys and splits the scene, blowing up the entire sci-fi island behind him, killing everyone. Can't Yor go anywhere without the blowing up the place he just left? That makes four separate cultures that have been blown up due to Yor's interference. The film leaves us with a message of hope:

"Yor returns to the primitive tribes on the mainland; he is determined to use his superior knowledge to prevent them making the same mistakes as their forefathers& will he succeed?"

No, he'll blow it up and kill everyone, the big silly doof.