Yor: The Hunter from the Future

Now wait just a goddamn minute. Let's take a step back and look at this from a more prudent perspective.

What the heck happened to the enslaved women and children in the cave?

Yor never rescued them. Yor drowned every single woman and child that had been kidnapped from the good guy village in the beginning. Yor saved Kala and left everyone else to die. Yor, Kala and Grandpa Seth were the only survivors. Yor is basically a mass-murderer.

But hey, let's just forget about all that. We're only half an hour into the movie, so let's just put Yor's murderous negligence behind us and move on to the next cheap set piece, or we're going to be here all night debating whether or not Yor killed all those women and children accidentally or whether he drowned them for cheap kicks and sexual gratification.

The merry band, still high from the slaughter of innocents, wanders into a Tattooine-style dust area. Grandpa Seth explains that the area contains deep crevices in the earth, containing all kinds of heat and steam and stuff; Kala warns Yor not to go there, because she had a prophetic dream that showed him helpless, surrounded by fire. Yor goes anyway, the big goof.

Yor is attacked by off-brand Sand People with giant flaming cocktail forks. Straight away, Yor is helpless, surrounded by fire. This teaches us an important lesson about the dangers of ignoring prophetic dreams. One time I had a dream that my cat Scuppers and I were trying to name a hockey team, and I thought nothing of it. Scuppers is long since dead, and for all I know that hockey team is still out there somewhere, crying themselves to sleep every night because Scuppers and I never named them and they're still called something stupid like The Ontario Pennywhistles. 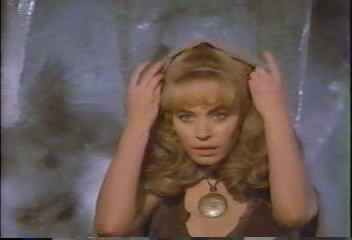 I just missed a bunch of shit in the movie because I was thinking about Scuppers. Anyway, Yor gets kidnapped by the phony Sand People and led to their beautiful queen, whose radiant babeness inspires Reb Brown to produce a truly toddleresque facial expression. She explains to Yor that his amulet (did I mention that he had an amulet? No?) is some kind of& special thing. She's got one too (did I mention that she has an amulet too? Yes?). She explains their meaning thusly:

"They say 'I came here together with those men. There [indicates men caught in ice next to her]. Caught in the ice. Why I am alive and they are dead, I don't know. And why the ice has formed in this parched desert is a mystery without an answer, but the little water that comes from it is vital to these people and they worship me as a divine goddess.'"

Wow, great explanation, lady. That really puts the whole fate thing into sharp focus. Good thing they were standing right by that ice when they translated those things, or they wouldn't have made a lick of sense, would they? Anyway, through some more fate bullshit, Yor decides that he and this lady represent the last of some kind of special race, so they hightail it out of yet another cave, collapse yet another cave, and destroy yet another population of people. To be fair, these people were jerks.

They meet up with Grandpa Seth and Kala, who is obviously jealous of the new lady. She offers the new lady a big fuckin' ball of moss because she hates her. 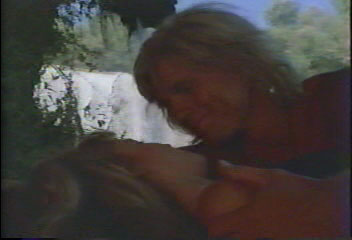 Yor gets his mack on with the new lady, because Yor has a soft spot when it comes to the ladies. It's on his skull; it never grew together properly when he was a baby, and now he has to wear the world's fluffiest Prince Valiant haircut to cover it up. Kala is pissed. She complains to Grandpa Seth about it, but he says "why can't Yor have two?" Grandpa Seth is a mack too.

Our band of merry dimwits, after an arduous two-minute journey, finally reaches the beach. That dumb bitch Kala tries to drink saltwater, and everyone laughs at her. They celebrate their apathy over the death of what's-her-face with a nice little fish-fry on the beach, which is interrupted by a giant rubber lizard. Everyone runs around screaming for way, way too long, and the rubber lizard scene ends only when I finally decide to hit the fast forward button. 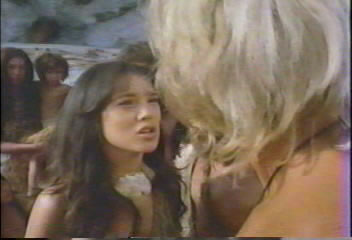 When I resume my plight, our heroes are chilling on the beach with a group of kids, including one kid who's kind of hot, and who Yor obviously digs. If Yor was the kind of guy who perved on teenagers, he would definitely perv on this one. You can see the side of her boob a little bit, and don't you dare think for a minute that Yor doesn't notice. He comes up with a flimsy excuse about how he already has a woman (Kala), but we know that the only reason he's not putting his big orange muscles all over her is because her dad is right there. Dad shows Yor a little talking box (a communicator) left by "the gods" (spacemen, duh).

Then the village blows up.

Distraught at the death of her father and the blown-upness of her village, Hot Teenager offers Yor her dad's flimsy wicker boat and tells him that he must seek an island in the middle of the sea, which is always surrounded by violent storms. Yor, being a big, stupid, dumb, dumb guy, decides that he'll take the wicker boat out into the violent storms.