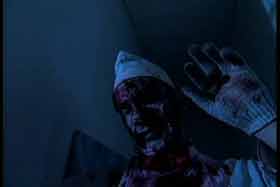 He waves. He goddamn waves. Why, God? Why does he wave? Sam gets a phone call from Jeff, warning her that there is a murder suspect on the loose in the area. Sam herds all the children upstairs and tells them to lock themselves in the bedroom. Uh oh, she forgot about little Emily! Naturally, Emily lets the bloodstained, glass-weilding Mr. Ice Cream Man into the house. Sam comes back stairs, and Mr. Ice Cream Man stabs her with the glass. Upstairs, the children huddle together, except for Joey, who watches the doorknob jiggle. Then a note slides under the door, with "To Joey" written on it in crayon. Joey opens the note. It says "Happy Birthday Son" in childish, backwards letters. That's right! Mr. Ice Cream Man is the one who raped Joey's mother! The note also has a picture of a clown.

Suddenly (well, not really), Mr. Ice Cream Man breaks through the door, brandishing his shard of glass. All the kids run right past him without any trouble. He seems to have no interest in killing any of them, which makes me wonder why he spent four hours chasing Roland. Joey remains immobile, though. Mr. Ice Cream Man says not a word, thank God, but instead sits down on the bed and puts down the glass. He must have done a pretty lousy job of killing Sam, because she miraculously appears and stabs Mr. Ice Cream Man in the shoulder with the cake knife. See, I told you it was foreshadowing. Unfortunately, Mr. Ice Cream Man is somehow invulnerable to stab wounds, as the knife in his shoulder fails to do any damage whatsoever. It's a good thing that Detective Jeff, that dashing hero, shows up in the doorway. He aims his gun at Mr. Ice Cream Man, but the villain is just too smart for that. He pushes Sam at Jeff, then comes at Jeff with the cake knife. They lock horns in an insultingly bad fight. Jeff kicks Mr. Ice Cream Man's ass, ultimately knocking him to the edge of the stairs. Rather than finishing Mr. Ice Cream Man off himself, Jeff lets him fall. It's a bad ending to the fight, but it's just not bad enough for Mack Hail. Mr. Ice Cream Man defies gravity, teetering on the edge of the stairs long enough to wave goodbye. He waves goodbye. I cannot tell you how much this upset me. The camera zooms out, then zooms right back in on Mr. Ice Cream Man's body. The scene fades to the exterior of a liquor shop. A woman and little boy we've never seen before walk into the shot. The mother tells her son Frankie to wait outside. Then we get to watch a montage of little Frankie sitting down and standing up, while occasionally saying "Mommy." Then it ends. I hate this movie.

If you've been paying attention, you may have noticed that ending made absolutely no sense. None. That's because Mr. Ice Cream Man's actual name is never revealed anywhere in the movie, even in the credits. I have the luxury of being able to look at the DVD case, which happens to give his name as Frank Dobbler. That's right, you need the case to understand the ending. Of course, even once you realize that the little boy at the end was Mr. Ice Cream Man as a child, it still doesn't explain a single thing about his motivation as a criminal. To the best of my understanding, little Frankie's mother went into a liquor store and didn't come out for a while, so he became a rapist, a murderer, and an ice cream man. It's all perfectly clear to me now.

"Mr. Ice Cream Man" is by far the worst thing I have ever endured. In order to write this review, I watched this movie three times. The first two times, I couldn't bear to watch it all at once. I am ashamed to be a member of the same species that produced this crap pile. The acting is criminal, the direction is juvenile at best, and the writing is so atrocious that I honestly wonder if my own writing has suffered as a result.