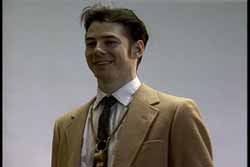 Detective Jeff and his Golden Whistle of Truth. I hate this man.Cut to the classroom, where the teacher is either very, very Swedish or horribly, horribly retarded. It's difficult to tell from her accent. She introduces Detective Jeff Haley (co-writer Jim Mills), who is there to talk about "street awareness." It is obvious from the getgo that Detective Jeff is not only a distressingly bad detective, but he is also the worst actor that has ever been captured on video. It is impossible to listen to him for more than ten seconds without hating him. Detective Jeff is the Mack Hail of the police force. Since Jeffy helped write this travesty, it's highly likely that he wrote his own dialogue in this scene. If that is the case, and even if it is not, he should be fed to rabid elephants. This scene is written so badly, it gives me heart palpitations. It's like every lame informative video I had to watch in elementary school, only with all the quality sucked out using some sort of voodoo spell. Detective Jeff immediately takes an interest in Joey, because he is a child molester. 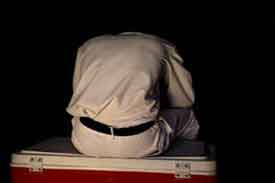 The Headless Ice Cream Man sits atop his Cooler of Doom within his Van of Perpetual Darkness.

Meanwhile, a random black child we've never seen before is walking through an equally random field called the Nature Park, carrying his books. What should he spy there but the ice cream truck! That's right, when Mr. Ice Cream Man isn't out waving at people, he parks in some stupid field. He is the devil given flesh. The random black child doesn't find anything odd about there being an ice cream truck in the middle of the field, but since he himself was most likely hiding in that field so he could smoke drugs, it's no surprise that he isn't functioning on a perfectly rational level. Oh, also this movie sucks.

The back of the truck is open, so the random black child goes around to see if he can procure some ice cream. Despite it being a bright, sunny day, the doors being wide open, and the ice cream truck being covered with windows, Mr. Ice Cream Man sits in darkness so dark, his head vanishes! After trying in vain to communicate with the taciturn Mr. Ice Cream Man, the random black child leaves some money and takes an ice cream, describing his actions every step of the way. The child gets greedy, though, and reaches for a second ice cream. Or maybe he paid for two. We'll never know. Anyway, Mr. Ice Cream Man suddenly grabs the kid's hand, and the kid starts breathing heavily. Just the way Mr. Ice Cream Man likes it.

Back in the classroom, Detective Jeff is handing out whistles to all the kids of the class. The idea is that they can use the whistle if they ever feel like there's danger, and Jeff the Mighty will come and save them. Jeff makes sure to hand Joey his whistle just as he says, "Simply.... blow on your whistle," in the most suggestive manner possible. I guess Mack and Jim couldn't get "Let me pet you with my penis" past the censors. The detective himself wears a special golden whistle, which becomes an important plot point, because this is a terrible movie.

After school, a mass of kids are gathered around a RV on the side of the road, from which a creepy old man is dispensing ice cream. When the camera switches to a closer shot, the kids are magically clustered around the side of an ice cream truck.. For the long shots, it's an RV. Movie magic, folks. It's a nice, quiet scene, until - oh no! - Mr. Ice Cream Man comes down the street in his ice cream truck, which must be an improved model, because it's an ice cream truck at all times. Or maybe the budget for this garbage heap was just too small to afford two ice cream trucks. Go with whichever explanation makes you happy, but the second one's right. The kids all flock to Mr. Ice Cream Man ("Hooray! It's Mr. Ice Cream Man! Now we can stop hanging around this disgusting pedophile in a mobile home!") The creepy old man is upset that he's losing his business, so he gives Mr. Ice Cream Man the "up yours" sign. Being the psychopath that he is, Mr. Ice Cream Man returns the favor. For some reason, when he gives the "up yours" sign, it makes the sound of a clown horn beeping twice. It's a strange world we live in. Also, this movie sucks.

The shot fades to a car turning onto that very same street. It's Detective Jeff, of all people. Jeff parks his car across the street, gets out, and walks toward the ice cream truck. The last of the kids run off with their ice cream, leaving only Jeff and Mr. Ice Cream Man - Jim and Mack. Thus begins a dialogue so painful, my intestines are churning just writing about it. On one hand, you have Detective Jeff, who simply cannot act. If there was a machine that measured bad acting, the radiation from Jeff's acting would cause it to melt and reform as a different machine, which in turn would possibly be able to measure just how bad he is. On the other hand, you have Mr. Ice Cream Man, in his first big scene. This is also the scene where it is revealed that Mr. Ice Cream Man is totally unable to speak and move at the same time. He must complete his action at least three second before opening his mouth and delivering his lines so poorly, it makes me wonder if there were actually three guys named Mack Hail working on this movie, since none of them seem to have any cognizance of what the others are doing. This scene is so bad that both of the actors become visibly bored.

Mr. Ice Cream Man gives Jeff a free can of Coke. As he reaches into his cooler, we can see a severed plastic hand in the ice. At first, I thought that it might have belonged to that random black kid, but then I realized that's impossible, because the random black kid was not, in fact, made of plastic. He was a real, live, human being, unlike Mack Hail, who I'm convinced is some sort of android. There is an incredibly long pause as Jeff drinks the entire can of Coke in silence, while Mr. Ice Cream Man looks around awkwardly. Detective Jeff mentions that a bunch of kids have gone missing, then asks Mr. Ice Cream Man to wear his legendary golden whistle, which he can then use to summon help if anyone tries to rape him. Mr. Ice Cream Man actually says, "I'll wear it with pride," because he's a stupid android. You might think that the severed hand makes this scene at least a little bit scary, but then you'd be wrong, and I'd have to assume that you're an android, as well.