Sam and Jeff go out on their date. Jeff is pleased to find out that Joey is Sam's little brother, presumably because this increases his chances of getting Joey alone long enough to cop a couple feels. Get it? "Cop?" And he's a detective? As bad as that pun was, it was still better than anything in "Mr. Ice Cream Man," so shut up. Jeff asks for the check, then Sam tells him that her mother was raped by an unknown assailant. Nothing's more romantic than first date patter. Her mother decided to have the baby, Joey, but died during childbirth. So Sam did the logical thing and took Joey away from his father to raise him herself. It makes perfect sense, and by "perfect," I mean, "absolutely zero." Then they order dessert. I guess they get it for free, since they already have their check, and all. I hate this movie so much. 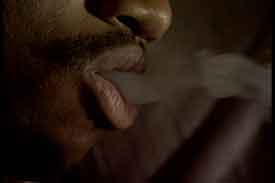 Realizing he's in a terrible movie, his soul tries to escape.

It's Saturday afternoon, and Joey is blowing up balloons for his own birthday party. He asks Sam to tell him about their mother, whom he never met, because, as was revealed in the previous scene, he killed her on his way out. The scene cuts to a black man sitting on a couch. I guess Mack and Jim could only come up with one character as fleshed out as Lt. Gale, because this man is the most blatant bad father stereotype I have ever seen. He is wearing a wifebeater, watching a football game, drinking a beer, and smoking a cigar. All at once! He must be the worst father in the world. Mack Hail really wants to emphasize this point, because he shows horribly shot close-ups of the beer and the cigar. In a dazzling display of effrontery for the space-time continuum, the father takes a drag from his cigar, exhales all the smoke, then exhales another huge puff of smoke in a close-up on his lips, then somehow takes the cigar from his lips in the next shot. Movie fucking magic. Roland enters the room, all packed for the big slumber party, including some snacks for the walk over to Joey's house. I'm not kidding. Roland's father utters some clichéd bad father nonsense, and Roland leaves a miserable and broken child, his spirits crushed. His father mutters something about Roland being a "dumb kid," which is undoubtedly the best line in the movie. 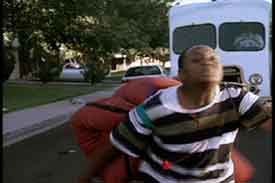 Roland calls upon the power of the fat to escape. It works. I hate this movie so very much.

Once outside in the sun, Roland is totally happy again. Ah, to be a blissful idiot. He immediately starts digging into the bag of snacks he brought for the trip, while humming a seemingly random group of notes. Oddly enough, he has quite a walk to Joey's house. I seem to remember him living right next door. That just doesn't make any sense. Could it be that this movie sucks? I believe it could. All of a sudden, the ice cream truck starts rounds the corner and starts rolling toward Roland. Roland is ecstatic, because he needs a between-snack-snack. He waves his arms and jumps up and down to get Mr. Ice Cream Man's attention, which isn't too difficult, since he's the only person on the street. The truck accelerates, and Roland realizes he's in danger. He runs in a straight line down an empty street, but for some reason, the ice cream truck can't catch up with a fat little kid.

Night has fallen, and at Joey's birthday party the cake is just being served. Sam holds a knife up into the exact center of the shot. Subtle foreshadowing, thy name is Mack Hail. Someone asks where Roland is, but everyone laughs it off. He's always late, remember? It all ties together so well! We cut back to Roland, who is still running, with the ice cream truck right on his heels. Let me explain this another way - he's been running faster than a truck for hours, and has never found shelter. Always the tactician, Roland leads the truck into Nature Park, then tries to escape by running through a forest. It's amazing how long it takes for that strategy to work, but eventually Mr. Ice Cream Man hits a tree. His head smacks the windshield, but other than some remarkably fake-looking blood on his forehead, he's fine. In fact, so is the truck, as it is nowhere near a tree in the next shot. Mr. Ice Cream Man grabs a shard of glass from the shattered windshield and chases after Roland on foot. The little butterball jumps into a pond and hides near, but not under a bridge. Mr. Ice Cream Man makes his way to the bridge and looks around, but doesn't spot the kid in bright clothes about a foot in front of him. As Mr. Ice Cream Man starts to walk away, Roland realizes he's safe and starts to leave. He wades right in front of a tall figure in white with a long shard of glass. He slowly turns around, and screams. You know, because it's Mr. Ice Cream Man.

Back at the party, the power goes out for no reason whatsoever during a game of pin the tail on the donkey. No one cares.

Detective Jeff gets a report of a break in at Nature Park. He rushes to the scene. Apparently a break in at Nature Park is a much bigger deal than a murder, because he takes furious notes. They find Roland's body and zip it up in a bodybag. Lt. Gale, sans sunglasses, coonskin cap, and banana, insists once again that there's no way to solve this case because he stabs some people and strangles others (yep, Mr. Ice Cream Man chose to strangle Roland, rather than stab him with the huge shard of glass). Sure, they have the ice cream truck with Mr. Ice Cream Man's blood all over the dashboard, but that's circumstantial. Jeff takes one last look at Roland's body, during which time Roland is clearly breathing. Jeff finds his golden whistle - the very whistle he gave to Mr. Ice Cream Man - in Roland's hand. All those years of detective training finally pay off, as Jeff makes the connection to (get ready) Mr. Ice Cream Man!