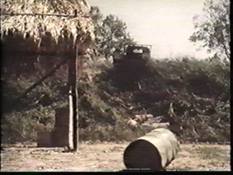 RUN! Just like in popular video games, these barrels blow the shit out of anything... and they're everywhere.The jeep takes Mike to rendezvous with the French hag that owns the whorehouse, and suddenly Mike is being chased around the woods / jungle / undeveloped plot of Wal-Mart property until he is captured via a comical Bugs Bunny-esque snare that causes him to end up hanging from a rope in a tree. I guess some wacky shenanigans do carry over to the real world. Remind me to bash director Fernando DI Leo in the skull with a sledgehammer if I ever meet him.

Mike is tied up and Paolo comes in asking why the hell Mike left the top secret Downtown Athletic Club headquarters in the first place. Mike offers to buy all the drugs from Paolo at a much higher price than the Mafia or the Chinese or the Russians or the astronauts or whoever they're currently being sold to. Why Mike wants to buy the drugs, I don't know. Why Paolo doesn't just shoot him in the face, I don't know. What Mike is supposed to be accomplishing by even being in Asia, I don't know. How the hell the Downtown Athletic Club has enough power and money to send operatives across the world to infiltrate global drug cartels, I don't know. The central theme of any action film in this era simply hinged on having enough humans to both operate the camera and appear on film at the same time, so meaningless crap like "plot" and "character development" took a backseat ride.

Eventually the whore parade comes into town and the badguys start swarming all over the prostitutes like... badguys on prostitutes. One of the good whores (who obviously considers Mike to be slightly less repulsive than everybody else) frees him and they begin to destroy Paolo's well-trained army of mercenary carnival workers. Since Mike and the slut are outmanned approximately 672 to 1 (they each count as half a person), he cleverly decides to use the surrounding base equipment to his advantage. Fortunately the base is composed of millions and millions and millions of barrels containing some mysterious exploding substance, so Mike's job is cut out for him. The rest of the movie is basically dedicated to barrels rolling around, being shot, and detonating in humongous balls of fire. Enemy soldiers try in vain to escape from the marauding rampage of deadly barrels, but it all turns out to be futile. Everything within a ninety-mile radius eventually has the shit blown out of it, so Mike and the whore get into a motorcycle and drive off to an exotic new area they can make explode. 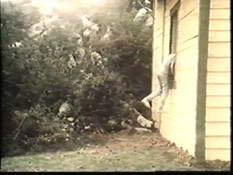 The badguys chase down Mike and the whore, who they then trap inside a small housing complex. By using such complex and ingenious military tactics as "shooting at them" and "releasing even more barrels of death", Mike is able to kill every single bad guy put Paolo. During this process, Mike takes the liberty of jumping in and out of various windows about a hundred times. This alone puts the "act" in "action," and the "suc" in "success." After shooting up or causing every bad guy to explode, the only people left are Mike and Paolo. Isn't that how it always works in action films? Do the criminal masterminds choose to surround themselves with incompetent morons so they'll always be the last guy left? Is it like villain life insurance? Or is knowledgeable, hired evil goon help simply really difficult to find? They throw down their guns and Paolo drives off into the sunset. Yes, Mike just lets the guy leave. Hooray. Another fuckup thanks to the ever alert Downtown Athletic Club Freedom Force and Anti-Drug Army.

Mike returns back to the Downtown Athletic Club, where he is congratulated by Kurt for essentially destroying a large chunk of Asia and not completing any of the goals he was supposed to. Mike engages in a series of flashbacks which highlight a few of the more "slightly less-revolting scenes" from the earlier moments of the film, and then he is escorted to a car waiting outside the Downtown Athletic Club. You'll never guess who is waiting for him inside the car... yes, that's correct... PAOLO!!! WOW!!! HOLY SHIT!!! Fernando DI Leo, you've done it again! And no, I don't know what "it" is, but it probably goes against the teachings of the Bible.

"Real Souljah" or "Razza Violenta" or "The Violent Breed" or "The Movie Which Will Probably End Up Getting Stuck Inside Your VCR, Causing You to Abandon Your Home and Move to an Entirely New City" is just a your stereotypical late 70's / early 80's cheapass action movie. Terrible film quality, horrible voice dubs, incomprehensible plot line, lack of any resolution or focus, and mindless action scenes are just a few of the more positive qualities of this film. The list of negatives is far too long to list, so I'll just leave my review at this:

Not even the special appearance of Cliff Yablonski saved this movie. 'Nuff said.