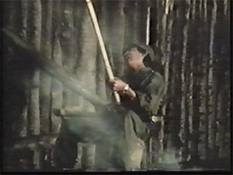 STICK AROUND, BUDDY! Haha! The cliched joke that never stops giving.The Americans kill off all the Vietnamese (who were preoccupied with sleeping and jabbing a large metal pot with sticks) and free the hundred or so kids that were trapped inside their log cabin fortress. No, we don't know why the kids were captured or why the Vietnamese even bothered posting guards there in the first place. But hey, there were kids running around the woods like morons, they got captured by a platoon of sleepy Vietnamese, and then they had to be rescued. Just accept it, deal with it, and move on.

Once Woody Strode (aka revolting black guy #1 aka "Paolo") and gang have pulled off "phase one" of the plan, they move onto "phase two," which requires them to destroy a Vietnamese radar station in the middle of an empty, open field. I assume the radar station was tuned to track various kids in the jungle so the VCs could hunt them down, put them in their log cabins, and then force them to continue assembling those plastic spider rings you get at the dentist's office after his checkup reveals no cavities. The Americans shrewdly elect to open fire on the radar station, and the Vietnamese decide to make their job even easier by running out into the open, practically flagging down their gunfire, and trying to see how many bullets they can catch in their spleen before they get bored and decide to fall down dead. Eventually the Americans decide to start chucking hand grenades into the radar station, and Paolo wisely decides to shoot one of his own men. Yup, for absolutely no reason at all, he unloads a round into a fellow American soldier and kills him. It made absolutely NO sense at all and couldn't be explained by a trained team of veteran movie industry experts (ie, Fragmaster). Perhaps Paolo felt guilty because the VCs didn't have good enough aim to commit suicide, so picking off one of his own men was just the polite thing to do.

Oh yeah, somewhere sometime during the radar assault, the captain of the troop ("Kurt") was shot. We're not told this until after the attack when they're walking away and the captain is stumbling around saying "I'm so tired." Even coming into contact with Vietnamese bullets apparently puts you to sleep. Strode performs an emergency bullet-ectomy, and then pulls a gun on them and tells him that he won't be boarding their boat and leaving with the rest of their crew. Instead he walks off into the jungle / woods / abandoned housing project area with two guys who have magically appeared out of nowhere. If there was a plot anywhere even remotely near this movie, I would claim it had thickened at this point.

So now we're back in America. One of the bearded soldiers is driving around in his Jeep, and the movie, unable to find any hot homosexual porn to film, decides to follow him all over town. The guy parks outside the "Downtown Athletic Club" building and gets out to partake in athletic club activities which consist solely of "throwing a tennis ball against a wall." Now I'm aware that the early 80's didn't have the technological advancements that we have now like treadmills, Nordictracks, and (apparently) barber sheers, but you know that you're in a pretty sad gym when the only activity offered involves bouncing a tennis ball off the wall while you stand still. I can't even begin to imagine what muscle this is supposed to work on. Probably something in your ass.

Anyway, revolting white guy #1 (who is named "Kurt") explains to revolting white guy #2 (named "Mike") that revolting black guy #1 (named "Paolo") is secretly a gun / drug kingpin in Asia, which explains why he suddenly held them at gunpoint and demanded they leave without him. Apparently the lure of being an international soldier for the "Downtown Athletic Club" just couldn't compete with selling drugs and weapons to squalid, ninth-world countries whose main export is fishing lures. Kurt goes on to say the following, which I am quoting in its entirety:

"Polo buys arm from the KGB and sells to Cambodians who uses them against Chinese Vietnamese. He uses the profits buy drugs for Russian mafia which are then sent to the US."

This is another characteristic of all early 80's action films: they had to span across at least 40 different countries. Generally speaking, the more locations you mention through dialogue means the less locations you are actually obliged to show on film. This not only saves time but also valuable money which can be funneled back into the "Mike's Big Fat Poofy Hair and Beard Fund." 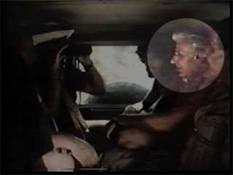 It's Cliff! He's not only a hero, but now he's a MOVIE STAR! Amazing!

The Downtown Athletic Club ships Mike over to Cambodia or Norway or Ohio or wherever the hell the rest of this movie takes place, so he can make contact with Paolo and stop his evil drug / gun / hairdryer business. Mike is told to meet up with a bloated Frenchwoman who runs a whorehouse, and at that point I just knew this movie was going to be a blast. Or it would end up murdering me. I was fairly apathetic either way.

Mike is immediately assaulted by two goons who look like extras from a "My Wacky Family" sitcom show, Uncle Al and Crazy Dave. They go through his suitcase for no reason and then attempt to beat him up by letting themselves be punched in the face and kicked around repeatedly. The whole fight scene looks like somebody electrified the floor and then tossed a couple 90-year olds with Muscular Dystrophy onto the set. Either that or they used the first blind fight director with ADD, who probably receives incredible union benefits.

After pushing Uncle Al, Crazy Dave, and their gang of retards to the ground enough times, Mike runs down the street and straight into the back of an awaiting Jeep which takes him on a tour of an opium harvesting field. Yes, that's how fluid the segueways in this film work. Straight from one pointless scene to the next, with less friction than a handful of KY slapping the Goatse.cx guy. The jeep drives around while a few of the guys in back point to random objects and explain how they can harvest drugs here and have sex with 10-year old girls in this country, but none of this information really seemed to matter.... BECAUSE CLIFF YABLONSKI WAS RIDING IN THE BACK OF THE JEEP! Yes, apparently everybody's favorite West Appleton resident has had a short-lived career in the movie industry because hey, there he is. This both amazed and frightened me. Mostly frightened.