I liked the Miami Vice TV show a lot when I was a kid. They used to have it on five days a week on this double feature deal on USA Network where it was Miami Vice and Silk Stalkings (another favorite as a kid) back-to-back. I would just sit down on the couch with some Cheez-Its and raisins and be transported to the stylish frontlines of the wars on drugs and on hot hooker murders. All too often it turned out the two wars were intertwined in a deadly dance of cocaine, speedboats, and super hot babes in short skirts getting pushed off balconies.

I was really excited about watching this one when I heard it was coming out and then I somehow missed it at the show. I think I was going to go with Keith and he couldn't go, but I won't mention what happened because he asked me not to talk about him on the Internet for a while. 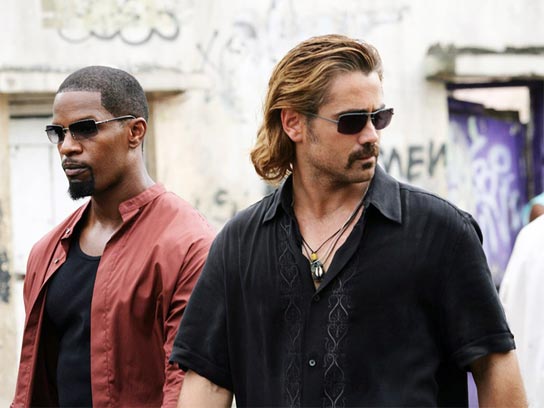 Anyway, when I saw this one at the video store I thought it would be pretty cool. I have to be honest now, I can't tell if it was cool or not because I feel asleep in that part after the guy dies on the Interstate and they're standing around a parking lot or something talking to some FBI agent about going undercover. Then I woke up and the guy from Daredevil was making out with some Chinese woman in a shower and I sort of stayed awake for that because she was pretty hot. Then I fell back asleep and woke up again and everyone was shooting everybody at a junkyard.

That part seemed pretty good, so maybe I woke up for the good parts or maybe the whole movie was good. I'm not sure. I was pretty juiced for that part so I stayed up and put on Krull again. Which was as awesome as I remembered.

Anyway, I have to knock points off on this movie because I wasn't sure what was happening half the time and it also really lacked the style I thought was so cool in the TV show. It just seemed like an episode of CSI: Miami with a higher budget or something. Some people really like that show a lot though, so maybe this was a good movie for them, but if you're a fan of the Miami Vice TV show or even Silk Stalkings then just forget about this movie and watch Krull instead.

So this was the first of my movie blogs. I had a lot of fun writing it because it's just casual and you can really let it all out and not worry about style or whatever. It was also fun seeing these movies, so maybe next time Blockbuster has a special I will do it again. I hope you guys had fun with it!

Oh, yeah, and I know I didn't do any rating numbers, but I thought as a blog it might be cool to do something different. If you really have to have some numbers to "get" my reviews of the movies then here: 9, 8, 7, 5. Hope that helps, guys.