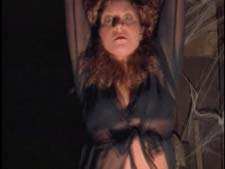 Um... hi, Bella.The Mexican gang is creeping through the woods. Apparently they are planning to spirit Cartoon away from the guards while the inmates are on their retreat. They stumble upon the cult's barn. One of the gang members investigates and is immediately attacked by Bella, or at least the naked woman who might be Bella. The rest of the cult is out for coffee or something. The Mexican guy puts a stop to Bella's naked, hedgeclipper-wielding ways by shooting her dead. As he goes out to explain to the other member of the gang that he was just drawn into a ferocious battle with a death cult, one of cultists finds Bella's body and screams in agony over the loss. You know, that's the thing that irks me about death cults. Sure, when somebody else dies, it's all fine and good, but the minute one of their own gets killed by a Mexican gang, it's the worst crime imaginable. What a bunch of hypocrites. I should also mention that anything and everything in this paragraph may in fact be totally incorrect. The editing in this part of the film sucks to a fairly impressive degree, so it's possibly that I either missed or misinterpreted something.

As the prison bus arrives, one of the Mexican gang members takes a single shot with his handgun. He only has the one shot from a decent distance away, but he has no problem shooting and killing the driver through the side window of a moving vehicle. Taka, the guards, and a few prisoners swarm out of the bus, just as a bunch of the cultists appear and attack the gang members. General chaos ensues, which is not improved by the fact that the inmates and the gang members are all dressed exactly the same. Some people probably get killed or something, but none of them are important. The cultists capture Taka by cutting his arm. The man can fight his way through a riot without so much as a scratch, but the minute he gets cut, he passes out faster than a freshman at a frat party. And the fact that he doesn't even manage to put up a fight before getting cut makes you wonder just how effective his survival training really is. 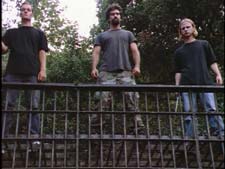 When you climb high enough in the ranks of the cult, you get to wear the ceremonial gray.

The rest of the movie is pretty confusing. The three groups continue to fight each other, I can tell you that much, but due to the crappy camerawork and piss poor audio, it's tough to tell what else is going on. The fact that most of the characters don't have names doesn't help either. The majority of the faces running around trigger no sort or recognition whatsoever, so you can't really say, "Oh, there's character X, so I must be looking at group Y." You can, however, say, "Oh, there's character X, so I must be watching a shitty movie." Not quite as useful, but infinitely more satisfying. The movie also suffers from some severe sound issues at this point. There are shots that just one person running across a field or swamp-like area while voices shout off camera, but as I mentioned earlier, without any frame of reference for the voices, they're meaningless. It just feels like a home video, with the shaky handheld camera snapping from side to side to follow someone moving quickly while the microphone picks up a completely unrelated conversation going on in the background. In addition, with all of the hacking and stabbing and punching and kicking and shooting that's going on, you can imagine there would be a fairly large number of sound effects needed. Well, they're all there, but they're terrible. In what life does sticking a knife into someone's side sound like a boot being pulled out of two feet of mud? What sort of gun and ammunition produces like a twig snapping when fired? 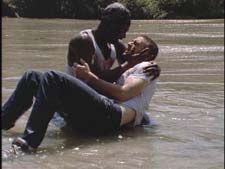 The Mexican gang regroups and decides that the only way they will make it out of this mess alive is if they use teamwork. Wow, they came up with that on their own without even having the benefit of Taka's teachings! Amazing! Cartoon meets up with the gang, and is instructed that before they try to get out of the damn woods he still has to kill one of the other inmates. Elsewhere, Danny finds a large stick and crouches in wait for someone to come running by. When someone finally does - specifically, the random Asian inmate - Danny bashes him in the knees. He is very apologetic about the whole thing, but I tend to get the feeling he really just wanted to hit somebody. They may be in a wooded area, but the trees aren't that thick. Danny could have clearly seen it was the Asian guy as he was running up.

Noah shows up and says that he has no interest in saving the others, only in getting the hell out of there. He runs off on his own. Before he gets too far, he is caught off guard by one of the cultists. Luckily, Danny hasn't forgotten that they're partners both in and out of the computer lab, and he saves Noah's life. A couple minutes later Danny gets shot or something and dies in Noah's arms. It would all be very touching if I gave a damn, but luckily I don't. Noah seems to, though, as he spends more time than is frankly necessary crying and screaming Danny's name. When Noah catches up with some of the other prisoners, he is a changed man. He insists that they all work together to free Taka, or they will all die like Danny. He specifically mentions Danny and only Danny in this regard, despite having seen several of the other inmates get killed right in front of him. This is basically Noah's way of pointing out that it's not that Danny was the only one who mattered, just that he's the only one who actually has a name in the script.

Back at the prison, a guard tells Taka's boss that the group has not yet returned from their trip, so something must be wrong. The boss orders the guard to send some cars out to the zoo to see what's happened, which is basically the only reason the boss is even in the movie. 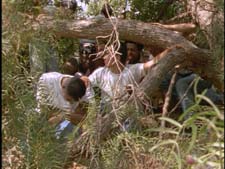 Does this look like a conclusion to you? Tough, because it's all you're getting.

One of the cultists shoots and kills the Asian guy, but not only does nobody mourn his death or scream his name, whatever that might be, but he doesn't even bleed. In a movie where the opening scene involves some of the most ridiculously overdone blood splatter I've ever seen, for this guy to get shot and not even have a trickle is just insulting. The rest of the inmate storm the cult compound as a team, so naturally they're invincible. One of the cultists is a martial arts master for some reason. When the cultists first attacked the guards after the bus crashed, this guy took out like five people himself. But his years of training and dedication to his craft is nothing compared to the hours Noah clocked working that one kick over and over again. So as you would expect, Noah mops the floor with him.

The inmates free Taka, whose cut arm has spread into a black eye and various cuts all over his body. Some might say he's been beaten, but I say the slash on his arm is assimilating him. What, I can't make some stuff up? Believe me, after sitting through this much of "The Wounded," I need to come up with irrational explanations for things just to keep my eyelids from crashing into one other with enough force to collapse the upper half of my face. The inmates also free the female hikers from earlier, in case you were wondering what happened to them, which I'm sure you were. So now Taka, the inmates, and the girls are still in the middle of a forest where murderous cultists and a vicious gang are roving around looking for blood. So of course, this is where the entire scene ends. That's right, it just ends. No conclusion, no explanation of how they all get home, no massive final battle, nothing. It just fucking ends.

Suddenly, we're looking at pictures of the inmates who survived. Apparently after all that, they just went willingly back to prison to complete their sentences. Taka tells us what happened to each one, as if we cared. For most of them, this is the first time we're even hearing their names. For a couple, I'm pretty sure it's also the first time we're seeing their faces. Mario got engaged to that Suzie girl, if you were wondering. Now doesn't that restaurant scene seem so necessary? Basically, everybody's fine, except for "Eddie, who didn't learn," who is back behind bars. While I'm sorry to hear of Eddie's misfortune, I have to ask one question: who the hell is Eddie? I'm sure Taka would love to go on talking about what happened to every other person who happened to walk by the set of the movie, but a guard interrupts him to tell him there's a riot in progress. As Taka heads to the barracks, we hear a new group of prisoners chanting "Bullshit," just like our old pals the inmate did so long ago. It's funny how things came full circle like that. Oh wait, no it isn't. It's pointless and irritating. You know, come to think of it, "Pointless and Irritating" would have been a great name for this movie. Way better than "The Wounded."

Well, I blame John Azpilicueta. I don't know what he was thinking as he made this movie, but it certainly didn't have anything to do with what an audience might find even remotely entertaining. Huge portions of "The Wounded" are completely useless. For instance, the entire opening scene has no bearing on anything whatsoever. The restaurant scene is only there so Taka has something to say about Mario in the end. All that crap about pulling up the map of the zoo doesn't make the slightest bit of difference in the end. Hell, even the final twenty minutes of the movie where the three groups are fighting each other doesn't go anywhere. It just ends when John Azpilicueta gets tired of shooting it. Considering the kind of garbage that made it into the final cut of this movie to bring it up to its eighty-five minute running time, I really, really hope there aren't scenes that ended up on the cutting room floor. I can't even begin to imagine what they'd contain. Maybe a shower scene showing Taka washing his mullet and soaping his manboobs. Or maybe the inmates all get together to celebrate Danny's birthday by singing to him while he blows out the candle they stuck in the dead rat. It would actually take concerted effort to generate footage more worthless to society as a whole than what made it into "The Wounded."