Taka shows the inmates a home movie of a bunch of fat kids playing outside. One gets killed by drive-by shooters. The inmates aren't bothered by this in the least. They agree on the point that it was either the fat kid or the shooters. Clearly only one could survive. When Taka questions them about this, they reply that he doesn't know what it's like living on the streets. That may be true, but neither did the fat kid who got shot. He's in the freaking suburbs. Taka storms out on the room angrily. The home video continues running and we see a man rush on camera to help the guy who got shot. Wait, that man's mullet looks familiar... my gosh! It's Taka! I didn't see that one coming! Surely this will have some strong bearing on the progression of the plot from here on out! Right? Uh... right? Oh well. 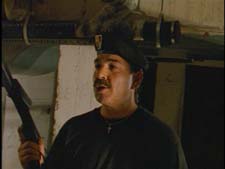 Holy crap! Taka's really that wacky Iraqi Saddam Hussein! I knew something was fishy about that guy!

As the next part of their training and rehabilitation, Taka takes the inmates to what must be the prison's Empty Shelving Unit Storage Facility. There, he splits them up into teams and gives them all high-powered paintball guns. One team at a time has to try to hunt Taka down and shoot him before he shoots them all. When he asks the first group if they're ready, they say they are without actually preparing at all. Taka pegs them all right then and there. They failed because they didn't use any sort of strategy. The second group takes cover behind some shelves before saying that they're ready, but once the game begins, they all go their separate ways and Taka picks them off one by one. They used strategy, but they failed because they didn't use teamwork. The third team hides and formulates a plan of attack, and only half of them get shot. They win because they used strategy and teamwork! And thus the lesson of "The Wounded" is revealed: work together and plan ahead, and only half of your friends will die.

That night, or at least, some night, Taka puts a huge rat into the barracks. Using their newfound powers of teamwork, the inmates work together to corner the rat and crush it. As they celebrate their togetherness, Taka storms in on the verge of tears and takes the poor little rat carcass away, berating the inmates for not having respect for living things. My question is, what the hell did he expect? He put a rat into an enclosed space with a bunch of violent criminals who he has personally been training to kill as one efficient unit. Why in God's name would he be even remotely surprised that they killed the rat? Did he think they would adopt it as a team mascot? A super-stylish haircut and smarts! Taka's such a winner! 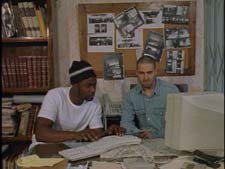 "Sure, I can hack Taka's files, but first there's some nice Nigerian man offering me twenty-five million dollars!"

Noah and Danny work on the computers again, but this time, when Danny gets frustrated, Noah helps him out. Then Danny asks him to hack into Taka's files to find out where he's thinking of taking them on their field trip. It turns out to be an abandoned zoo. Then they pull up a map of the entire zoo grounds, which Taka also has on file. Now, I'm willing to let the idea of a superhacker like that slide, because it's become so common in movies to have at least one person who is good with computers, so naturally they can hack into any system on Earth in three keystrokes. But Noah, like all the other inmates, is supposed to be a gang member who grew up stealing and fighting on the streets. Exactly when during his long days of hanging with his peeps and cappin' asses did he have time or access to a computer long enough to become a master hacker who can break into encrypted police files from a secure training computer? Homie does not, in fact, play that.

It's been nearly twelve minutes since the last one, so it's time for another training montage! This one shows all the inmates working together and making marked improvement, but is also focuses entirely on physical activity. They're stronger, faster, and more durable. Their academic skills, however, are still at the level of fourth graders. I guess that's because John Azpilicueta couldn't write scenes showing the inmates exhibiting more intelligence than he himself possesses. Nonetheless, they all do push-ups in unison, they duck and run their way through an obstacle course with finesse, and Noah continues adequately kicking. Oh, and they must be learning the value of life, as there's even a shot of a rat living happily in a cage! I'm pretty sure it's the same rat, but I have to believe we're supposed to think it's a new rat. If the strength of their togetherness brought the old rat back to life, I'll be pissed. Also, I may have overstated things a little when said it was living "happily." The cage is about one inch longer and maybe and inch and a half wider than the rat itself. It's fine, as long as it never needs to turn around or access its food or water. 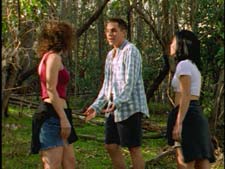 Next thing we know, it's visiting day! While Mario catches up with his baby's mama and Noah chats with his successful, educated younger brother, Cartoon meets with a few members of his old running crew. They make plans to bust Cartoon out of jail and pass him a massive freaking carving knife with instructions to kill one of the other inmates who was a member of a rival gang. Ooh, is that a subplot I smell? No, no, it's just the passing stench of a feeble attempt to stretch this exercise in futility out a little longer.

Speaking of subplots, here's something which barely passes as one: three hikers are lost in the woods. After some moronic dialogue that makes them all look certifiably retarded and prohibits the audience from caring in the least whether they (the hikers, not the audience) live or die, they come upon a barn covered in graffiti. Ever the intrepid explorers, they go into the barn and find what looks like a human skull. Moments later, they are attacked and captured by a bunch of guys in black T-shirts. You can tell that they are a death cult because of the black T-shirts. It has nothing to do with their death-worshipping rituals, since no one who sees one of these rituals at any point in the movie actually refers to them as a death cult, but plenty of people who see the black T-shirts do. It's nice how cults are color-coded for easy identification like that. 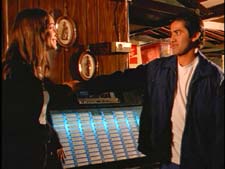 Now that such important plot elements as "the death cult" and "outside" have been introduced, it's time to actually start to think about beginning to touch upon the major segment of the plot that the blurb on the box cover talks about. Taka and a few guards load all the inmates up onto a bus and head out for their big class field trip to the zoo. Along the way they stop in a restaurant for the purpose of inserting another five minutes of footage into the movie. Almost all of the inmates steal their knives from the restaurant, but we never see those knives again, which is odd considering how the rest of the movie progresses. Also, Mario flirts with a college girl named Suzie and beats up her boyfriend. Naturally, since Mario comes off as a kleptomaniac who is prone to fits of violence against strangers and travels around with a large group of identically-dressed men and armed guards, Suzie is desperately attracted to him and gives him her phone number. This is also useless as far as the plot is concerned, but at least it comes up again later on. Kind of.

Let's see, we're a little over an hour into the movie. At this point we've spent roughly an hour and two minutes with Taka and the inmates (which would be a great name for a doo wop group), about two and a half minutes on credits, and approximately thirty seconds with the death cult. John Azpilicueta is dead set on convincing us that they're important, though, so we get to observe some of their ways now. As a bunch of social rejects in black T-shirts watch on, a woman gets naked and has sex with the male captured hiker. When she's done, she hefts a pair of hedge clippers. Presumably, she kills him - what with it being a death cult and all - but that's not a definite. In any case, I think that the naked woman is Bella, the leader mentioned in the blurb. There's no way to be sure, since no one refers to her by name, and she's only got one line which does very little to confirm or refute her leadership position within the group, but it's as good a guess as any.