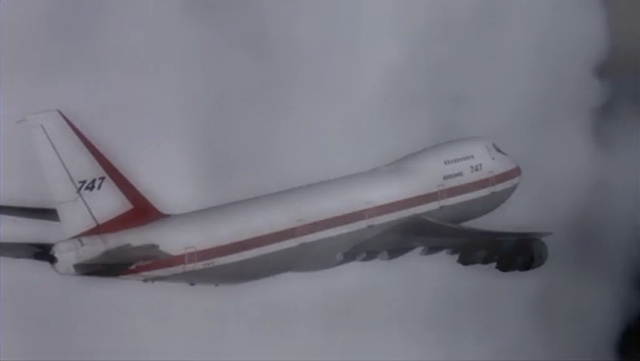 Ahem. Anyway, the flight predictably goes wrong due to a "computer virus", which of course causes the plane to radically alter course and fly straight into a gigantic superstorm. The pilot gets struck by lightning through the control stick, and then just to prove that he probably wouldn't have been any help if he was conscious anyway, the co-pilot grabs the controls ten seconds later and also gets himself zapped unconscious/dead. The passengers are blissfully unaware of all of this since they're too busy chugging Dom Perignon and enjoying the in-flight peanuts. Yeah, in-flight peanuts, salty like the six kilometers of guts Johnny had to crawl through in the trenches of Venerealus Prime and pull a perfect flip six to nuke that bug hole. Salty like the tears that rolled down his face when he got the old Dear-Johnny video from Carmen, AKA CAPTAIN CU-

Oops, sorry about that folks, just bear with us a little here and we'll get you back on track in no time. Johnny and his boss-man decide to chill in the state of the art green screen control tower at Blinkety Bloop Airbase to watch their reckless test flight go down in flames along with their careers and few dozen human souls, you know, maybe throw back a couple brewskies, no big. Until General Buzzkill shows up and threatens to shoot the plane down to ratchet up the dangerously nonexistent stakes/tension level from absolute zero to "I thought I felt some suspense a minute ago, but it was just gas." As per usual, the stern military types quickly take over and occupy the rest of the movie with lots of scenes where they look all serious and say serious things that are obviously ripped off from less stupid movies like The Rock pretty much verbatim.

After about ten minutes of airplane-taxiing footage, which yes to answer your question is somehow even more boring than actually being stuck on a taxiing plane, Johnny finally gets his chance to put on his best Steven Seagal face and jump on board the haunted death plane via standard issue hero tube. By the way, "airplanes going down runways" is the "cars slowly parking" of Turbulent Skies - a nice, long filler shot that wastes adds plenty of running time to an already thinly stretched premise. Speaking of cars slowly parking, the daring mid-air acrobatics get Johnny to the cockpit just in time to jimmy HAL 90 open with a screwdriver and snip some random wires like a minimum wage cable guy. Ta-da, everything's fixed, day saved. But wait, that's not the only reason that Johnny is up here - that would be fucking ridiculous. He's actually here to help his estranged wife land the plane with the power of marriage:

Finally, a positive cinematic message about the sanctity of marriage. Notice how when it was two men in the cockpit, everyone was almost killed in a massive fireball? Really makes you think. Don't get us wrong, we're not saying that gay marriage is somehow "wrong" or "evil," we're just saying that gay people shouldn't be allowed to fly airplanes because God is much more likely to suddenly kill them with lightning bolts because he hates them so much. Vote "NO" on gay pilot marriage or else before you know it we'll be living in some kind of crappy JJ Abrams-style dystopia with planes constantly falling out of the sky and people dueling with swords and crossbows in the ruins of a minimall. Anyway, after being talked down by Ving Rhames' skinny stunt double (Thin Rhames) , the plane lands and everyone walks away happily ever after. Except they thought they were landing in Cleveland, but where they really landed is KLENDATHU! THE BIG K! IT'S AN UGLY PLANET, A BUG PLANET! RICO, YOU KNOW WHAT TO DO!

The door suddenly bursts open, and out walks Neil Patrick Harris and his elite team of Secret Military Undercover Guys in full space Nazi regalia, complete with special Federation Issue jack boots. Neil Patrick Harris puts his silky, immaculately-manicured hand on the evil autopilot's writhing, grublike, blinking blue eye thing, and an eerie hush falls over the passengers of Flight #405. Slowly, purposefully, he lifts his head, his gaze piercing through the sea of faces before him as though looking to the future, and his lips begin to part like a first class courtesy curtain.