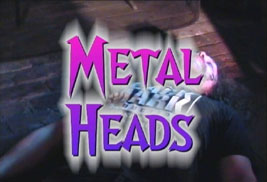 Overview: It's really hard to give one of these when the movie you're reviewing has literally zero plot.

Directed By: Bill Zebub (Get it? The joke's that he's a retard)

The Case For: Honestly, the best thing this movie has going for it is that you can't find it anywhere.

The Case Against: Welp, 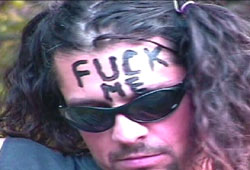 Yeah, pretty much. I can only imagine the nerd rage I’m subjecting myself to by reviewing a Bill Zebub movie. Zebub, for those of you who don’t know, has amassed a large Myspace following simply by sucking shit at everything he does. While this certainly isn’t surprising for a Myspace user – I wouldn’t trust any of those idiots to hold my dick while I was peeing, even if I was using both free hands to bludgeon the members of Fallout Boy with a box full of good music – the sheer scope of Zebub’s incompetence has drawn in an army of chubby, pink-haired girls with too much self respect and not enough acne medication.

Unfortunately, Bill does not understand that, when you appeal to the lowest common denominator (i.e. metal fans), you’re going to get sycophants no matter what you do. I could make a three-hour film of my dog taking a dump in the back yard, put some Slayer in the background, and nerds all over the Internet would be screaming about my “artistic vision” and “righteous duderotomy” or whatever inbred metal-people like to talk about when they’re not fingerbanging their sisters with one hand and giving devil horns with the other. Does that mean it’s good? No. Does that mean “Metalheads”, one of Zebub’s first forays outside of the urine-stained refrigerator box he calls home, has even one good thing going for it? No. If you’ve ever used Myspace for anything other than making a list of people who need pipe bombs in their lockers, you’re probably an idiot. Sorry, but that’s the truth – wait, let me rephrase that so you can read it. ~*sOrRy, bUt DaT’z dA tRoOf*~

Another thing Bill doesn’t understand is irony. While his fanbase is definitely full of mouthbreathers who wear all black because it’s the only color that doesn’t stain when they roll around in a pile of their mothers’ used tampons, there are also the other people. You know the type – the ones whose profiles say “I’m the funniest person I know” then go on to list Family Guy as their favorite show and Chuck Norris as their favorite celebrity. The ones who write poems about how it’s so hard to function in a society when your dad gives you a mean look because you got so caught up listening to Hawthorne Heights that you ran his Bentley into an outlet mall. The ones who watch bad movies with their friends – not because they enjoy them mind you, but because they want to tell everyone about “Killer Insectoids from Captain Cocksucker’s Faggotarium” and how it’s the best movie ever. Right now, I guarantee you, some reed-thin little fruitcake is pushing up his horn-rimmed glasses so he can write me a semicolon-filled diatribe about appreciating B-movies because they’re – get this –so bad they’re good.

Well, if you’re the nancy-boy writing this to me right now, you might want to hitch up your girl pants and run a comb through that ironic mullet of yours, because I’m about to blow your mind: nobody gives a shit about you or your boring hobby. The concept of “so bad it’s good” was around far before your dad huffed too much glue and railed the bag of adipose you came to know as “mommy” in the back of his Silverado. Ed Wood is not a “hero”, and the only reason people still sit with you through “Dead/Alive” is because you can occasionally come up with some good pot. With any luck someone will eventually tie you to a truck bumper and drag you through a thumbtack factory. They just need to realize hate crime laws don’t apply to hipster faggots.

Given Zebub’s enthusiasm towards his projects, it’s too bad he doesn’t approach things more suited to his abilities (slashing his wrists or chugging antifreeze, for instance) with the same unabashed glee. Unfortunately, his mother didn’t have the foresight to shove a revolver up the soggy catcher’s mitt she calls a vagina when she was pregnant with her hairy little bundle of filth, and now I’m stuck paying for her food stamps on top of having to watch movies like “Metalheads”. If that’s not a sign that something’s going wrong with this country, I don’t know what is – I wouldn’t mind giving up my personal rights if I could meet some friends, walk over to town square, and watch Bill Zebub catch a couple hundred bullets with his face.

Bias against people who don’t contribute a goddamn thing to humanity aside, “Metalheads” is a pretty good argument for more than government-sanctioned death squads. For instance, the next time I’m running late for something across town and I “accidentally” plow my car through a group of overweight basement-dwellers wearing enough black on to incite a klan riot, I’ll laugh. I mean, not that I wouldn’t laugh before, but I’ll do it even harder knowing I’ve contributed more to humanity than Bill Zebub and his receding hairline could ever hope to. I know a lot of you guys probably think my spite is unfounded, but I want you to look at this picture and tell me you don’t get a raging erection at the thought of killing the person who made it: 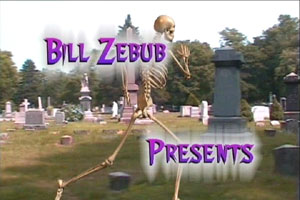 Honestly, if you make something like that and the first thought in your head isn’t to chop off your hands so you won’t do it again, you should probably check yourself into the nearest suicide clinic and hope they don’t turn you away because you’re too “icky”.