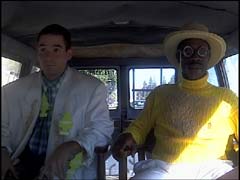 Yes, Leroy has oaty vomit all over his yellow cardigan. Yes, Marty is wearing air fresheners. Yes, I hate my life.You may have noticed the word "fart" being tossed around a bit liberally. This movie loves farts. Randy farts. Marty and Leroy fart. Marty and Leroy's fathers fart. The bit characters fart. The zombies fart. The corpses fart. Don't get me wrong, I think farts are hilarious. A well-timed, well-executed fart joke can be an intelligent bit of humor in the right situation. Zombies Gone Wild just tries to throw farts at the wall and hope one is wet enough to stick. To be fair, it does work once. Just once. I didn't bother to actually count the number of farts in this movie, but estimating conservatively, that would be one funny fart compared to roughly six hundred "Oh God, someone shove a cork up that guy/old man/cop/mechanic/zombie/corpse's butt" farts. Not a great ratio.

Randy picks up Leroy and Marty is his van, then immediately farts. The combined stench of his gaseous emission and the rotted reek of a pair of ancient panties hanging from his rearview mirror (a memento from Randy's first sexual encounter, who naturally farted like a pro) causes Leroy and Marty to vomit all over themselves. I'm fairly certain one of them farts in the process. 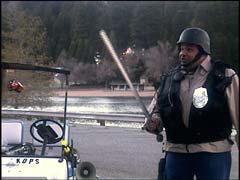 Check out that badge. That is a motherfucking badge, right there.Remember how this movie is called Zombies Gone Wild? Notice how there have thus far been no signs of zombies and all of the going wild has been contained to the digestive tracts of the main characters? Yeah, that's pretty much par for the course for the next hour of this film. The boys talk about getting girls, have a run-in (literally) with a fat, gassy, golf cart-driving cop who carries a sword (there it is!), try to get directions from a fat, gassy mechanic who fixes their van by breaking the windows with a wrench, and have a lengthy, lengthy discussion about the technical details of Irritable Bowel Syndrome. In fact, the only remotely useful thing that happens in this sixty-minute stretch of jokes that fall flat, die, and start to stink a little, is that Leroy picks up a newspaper and finds an article about a woman who supposedly ate her boyfriend. "Sounds like some zombie shit," says Leroy. Well, that mystery's solved. Back into the van, gang! 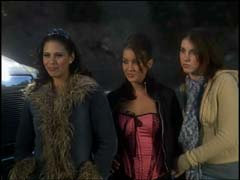 L to R: Zombie Queen, Helen Keller, Helen Keller's Emo Sister.By sheer luck, the guys run into a trio of moderately sexy girls. One is basically mute, one is deaf (or retarded, in Randy's opinion), and one is inevitably going to reveal herself to be the zombie queen, but otherwise, they're exactly what the boys were looking for. The girls invite them to a party. En route, we get a few glimpses of some zombies shambling around an otherwise uninhabited town. They're not exactly "going wild," but they're definitely zombies, and that's a start. When the guys finally arrive at the "party" (read: a few people in the middle of a field. WOO! SPRING BREAK!), they are not the least bit perturbed to find a few zombies in attendance. One girl is even dancing with what is obviously a charred corpse. The guys have other things on their minds, though, and by their minds, I mean their penises. The lead girl takes an interest in Randy, while Leroy makes out with the deaf chick and Marty gets to first base with a cross-eyed girl who has to wear a helmet at all times. Yep, they went from making jokes about how the deaf chick is retarded to actually having someone make out with a genuinely retarded girl. That's solid class right there. 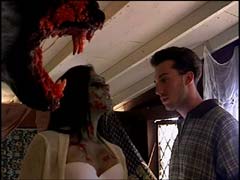 "How do you like my giant cat head statue?" "My name-a Borat!" "Uh, I've got an early morning, so..."To everyone's great surprise, when night falls (which it does exceedingly rapidly and with no transition), the lead girl turns out to be the zombie queen, and everyone at the party is a zombie under her command. These zombies are a true menace to the sanctity of Spring Break, being both slower and weaker than normal humans. Also, their bite doesn't turn you into a zombie. Still, Randy, Marty, and Leroy make a good show of running around like idiots and splitting up at the first possible opportunity. Never mind that their van is parked about ten feet from where they started running, and they could easily climb in and escape at any time. Eventually, Leroy and Marty do just that, but Randy is captured by the zombie queen. 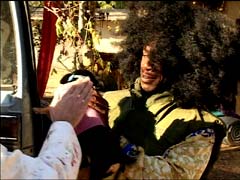 Guess what else was in Marty's burlap sack! I'll give you a hint: it rhymes with "bliant blafro blig."By the time Marty and Leroy go back for their flatulent friend, he has been turned into a zombie. Seeing him in a questionable state of living, they implore him to speak. His only response is a squeaky little poot. There it is, the one funny fart in the whole movie. Smell the comedy! Desperate to save their friend, and apparently unphased by the fact that it keeps switching between day and night, Marty and Leroy retreat back to the van (the zombies just let them go), where Marty retrieves the burlap sack his father gave him. Inside are enough guns to kill everyone who made this movie, or everyone who saw it, which would be quicker and more merciful. Armed to the teeth, they go back and start blowing away zombies, who are conveniently lined up for maximum killability. Before Randy can be saved or the queen zombie destroyed, a random stylist wanders into the fight and starts complaining about people's hair and makeup. Everyone breaks character, revealing this is all just a movie. And I don't mean Marty, Leroy, and Randy decided to shoot a movie. The actors start using their real names. Yes, it is that much of a cop out. The end.

As I said earlier, a campy horror comedy spoofing the Girls Gone Wild videos could be a fun premise, if only for a little while. Sadly, Zombies Gone Wild abandons its own idea before the film even starts, then settles for a hundred minutes of lurching, stuttering fart jokes, dick jokes, and awkwardly long conversations between actors who clearly never saw anything resembling an actual script. Mystery director G.R. also claims a writing credit, but as far as I can tell, the only part that was actually written was the credit sequence itself. Without another dollar to its budget, this movie could have been genuinely funny, and possibly even genuinely scary. Sadly, it took the easier, but infinitely more pointless route into the realm of cinematic garbage. The filmmakers would have us believe that they are renegades, and if we don't like their movie, then fuck us. But you have to wonder, if this movie was designed to be one gigantic flipping of the bird to the audience at large, isn't there anything more productive they could have done with their time, like giving one another AIDS? It is a question for the ages.