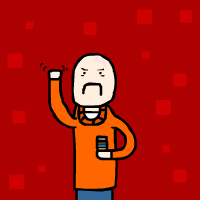 Luckily, a certain co-worker broke up the workplace banality. I'll call him Angry Jeb, because for some godforsaken reason, that's his name: Jeb - a name so hillbilly that it actually rhymes with "overalls." I'm not at all worried about him finding this article because science has proven that it's physically impossible for him to navigate to any web site except ESPN.com. Please note that his name is actually James, but he prefers to be called "Jeb." This says more than any comprehensive psychological case study ever could.

Jeb was unique in that he got incredulous and angry if you didn't share the same opinion as he did about something, no matter how trivial the subject matter. And when I say "angry," I mean "rape you just to prove a point" angry. This happened often as Jeb's opinions were of the "syphilitic mind" variety. Allow me to transcribe one of our conversations.

The most notable Angry Jeb interaction was on the subject of beer. I was joking with a co-worker about Natural Light (AKA "Natty Light"), a notoriously awful beer that isn't consumed by anyone over the age of twelve. As we joked about how awful it was, Angry Jeb interjected.

- What you said about Natty Light. You're wrong. I beg to differ.

- You're going to have to beg pretty hard, because that beer is awful.

Let me interrupt this conversation by further describing Natty Light for those of you who have been fortunate enough to avoid it. In fact, the best way to let you know how Natty Light tastes is to give you a recipe so you can try it for yourself.

You see, Natty Light doesn't even have the common decency to taste like straight-up urine. But let's continue.

- Well I drink all kinds of different beer like New Castle, Yeungling-

- Hold it right there. I don't drink anything made in Pittsburgh. I won't even eat Heinz Ketchup.

- Is this some sort of football rivalry thing?

- NO I JUST HATE THAT FUCKING CITY.

Ah, Angry Jeb. His bizarre sense of male stoicism and enjoying nothing in life never failed to fill me with feelings of astonishment and wanting to kill myself. But what was I going to do with the remaining 8.5 hours of my workday?

As I explained before, this job took place in a skyscraper that is 100 years old. And since few people are clamoring for office space in century-old buildings in Youngstown, Ohio, I spent a great deal of time exploring the building and documenting my findings. Since 10% of the building was renovated and 90% was not, it was like my workplace was Boringtown, USA, but surrounded by Silent Hill. Of course, this meant hundreds of doors with broken locks and rapists with giant knives chasing me down empty hallways, but anyone who lives in Youngstown will tell you that this is just how we live.

Large sections of the bank were reserved to hold giant, mangling pieces of banking machinery , while the rest of the building seemed to be part of a scientific experiment documenting how long it took for a building to implode of its own free will. The Post Office also seemed to have used this building for their own testing purposes: Mr. Zip stickers were posted in each and every hallway, reminding people to use Zip codes as if they were a new concept the retarded American public could not grasp. But perhaps my greatest find was a secret room on the roof, full of records not dating past the Truman administration. This room was different from the rest, with hardwood floors and what must have once been a much nicer decor, quite possibly not rotting off of the walls at one point in time. In one end of the room, the ceiling held a giant, boarded-up skylight, and in the other end, a three-foot tall alcove was carved into the wall, containing what must have been some sort of bathroom. As I would come to this room daily to sit and ponder why such a small bathroom would exist on the rooftop of a bank, I had no idea that this area was used for ghost storage and my daily visits were letting them all out. So I figured that this was a very good time to quit.

My story does have a happy ending, though. Despite still being unemployed, I made it into the grad school of my choice and will be headed there in the fall. Youngstown is now full of angry, violent ghosts, but we're managing to get by. And as for angry Jeb? Well, rumor has it that at this very moment he is concocting a plan to give City of Pittsburgh a wicked dropkick. Angry Jeb, keep chasing that dream.