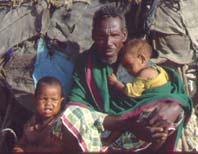 This guy is poor. He didn't have enough money to keep his child from looking like Mr. Potato Head.

It has recently come to our attention that many of you out there don't appreciate technology as much as you should. That's right Sid and Mary Feinstein, I'm talking about both of you in particular. Although the aforementioned jerks make up just two people (last time we checked), there are plenty of other guilty parties out there sitting around and taking technology for granted while drinking Diet Pepsi, eating diet frozen dinners, and smoking Diet Marlboros.

Look around you. Notice how technology is making your life better in every conceivable way; that big box thing shooting out all the invisible beams which kill your sperm is a computer monitor, the result of technology. The little boxes which horrible noise comes from are known as either "speakers" or "that box from Hellraiser," both of which were produced using technology. You cannot walk three feet without bumping into technology or at least stomping on it by accident, in which case you should pull technology aside and say in a calm and soothing voice, "I'm very sorry, technology. It will never happen again." Technology is very sensitive, and you can't just go around being a real jackass to it unless you want to wake up tomorrow with a big chunk of circuitry piercing through your heart.

However, not all people in this world are as blessed with the gift of technology. For example, there are a lot of filthy, dirt-encrusted, parasite-factory kids in 12th-world nations who will never get to use a PDA, drive an automobile, or even touch the machine gun which government forces used to mow down their family members because they were obstructing the village's illegal cocaine and chicken export. These stupid, stupid little kids won't get to experience the fun and joy of using a computer because they will more than likely be buried in a mass funeral pit before the end of the year.

Now while we here at Something Awful cannot possibly afford to purchase and ship computers to each and every child, we do empathize with their plight and have been brainstorming for months about what we can do to bring the joy of entertainment technology to little dirty minority children across the globe. During this process, we noticed that one of the most popular games these days is Blizzard's "Warcraft III" for the PC, a title which brings happiness and euphoria to millions of pasty white teenagers who cheat a lot and seriously type things like "LOL." With this in mind, we researched the most cost-effective practical platform for gaming and spent the past three months porting "Warcraft III" to this system so we could bring love to the hearts of a few million children whose biggest daily meal consists of boogers and AIDS-infected puddle water. Ladies and gentlemen, I am proud to present to you our crowning achievement: "Warcraft III" for the Atari 2600. 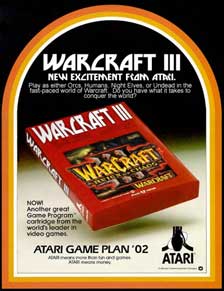 One of the ads we're running in East Timor.

Now let me admit that the Atari 2600 was not our first choice for a gaming platform. Our coding team ranked programming for the Tandy, TI-81, and broken abacus above the Atari 2600. In fact, they loathed coding for the Atari 2600 so much that during the project I was personally stabbed in the face over six times. Unfortunately, the Atari 2600 was the best deal when it came to technology per cost, so our financial advisors (two guys we found on the corner of 5th Street holding a sign which read "WILL ADVICE FINANCES FOR FOOD") instructed us to utilize the Atari 2600 in our quest to spread happiness like some kind of airborn tapeworm. This struggle to port new technology to old hardware caused a rift in our development team, as illustrated here in one of the coder's journals:

Day 3: we just heard that we'll be programming Warcraft 3 for the Atari??? what the fuck??? jesus christ, I didnt move out here to work on shit like this.
Day 19: fucking christ, we finally figured out today how to make the color orange, I hate life.
Day 38: no matter what I code, the only thing outputted is orange squares now. what the fuck???
Day 41: EVERYWHERE I LOOK I SEE ORANGE SQUARES
Day 56: (Journal confiscated by District Attorney to be used as evidence in court case)

I admit that porting "Warcraft III" to the Atari 2600 was a long and arduous journey, but during this experience I learned many things, the least of which is to never force people to port "Warcraft III" to the Atari 2600. We also learned plenty of crap about teamwork, the true value of friendship, and where to score speed at 3:00 AM Monday morning. Combine these factors with the pleasure of knowing we were making a positive difference in the lives of many children who would've otherwise never seen even a couple wads of technology, and you have one development team that was happy spending 20 hours a day writing code that's sole purpose was to make a horrible "GAAAAAAX" noise screech out when your character was hit with an opposing rectangle.