The game's basic premise is that all the disasters modern society fears come true at once. There must have been a typo somewhere in the design document, though, because every aspect of the game itself wound up being a complete disaster. See how important it is to use proper punctuation?

Bad Day LA is brought to us by American McGee, a man whose primary claim to fame and continual press coverage is his unique name. Well, either that or the handful of average to completely forgettable titles he's worked on in a producer/lead designer capacity. His first such game was billed as American McGee's Alice, which was something of an oddity since designers don't slap their names on game titles until after they've actually accomplished something and let it get to their heads. One of the only game designers that truly deserves to put his name on everything he does is Tim Schafer, but if you head down to your local game store you won't come across Tim Schafer's Psychonauts and Tim Schafer's Grim Fandango. To be fair though, if Tim's name was Honkhonk Lookatmyname I'm sure he'd change his mind. That son of a bitch.

McGee claimed that the appearance of his name in Alice's title was entirely the idea of publisher Electronic Arts because he's obviously a really humble guy who would never do such a thing on his own. By the way, two of his upcoming projects are entitled American McGee's Oz and American McGee's Grimm, and the boxes for Scrapland and Bad Day LA have a big fat "American McGee Presents" stamped across their tops. Curse you, Electronic Arts! If you keep making American do this to games that you're not even involved with he might start to look bad!

Bad Day LA's demo opens with what is quite possibly the most painful splash screen to appear in a video game: 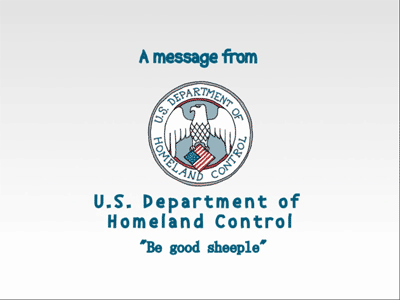 Woah, be careful with that wit, McGee! It's almost sharp enough to scratch something if you keep clumsily hacking away! After the splash screen you are treated to a low resolution trailer for the game which is prerendered and just blurry enough to make the graphics look sort of good. Then the movie ends and reality sinks in.

First, a quick check of the menu reveals that you cannot change your resolution or remap any of the controls. This is the year 2006. Trust me, I just looked it up. Oh well, customizing settings is for sheeple anyway. The only real options you have are to start a new game or quit. I suggest choosing the latter.

Choosing the former launches you into a movie that introduces the game's main character, Anthony. Anthony is a homeless man, and he is black. This fact is beaten to death with his dialogue, featuring such gems as these from the first five minutes of the game alone:

"That honky's jacked on some crazy shit yo!"

"You one crazy cracker!"

"Oh hell no, that ain't right. Fuck'n terrorists, always having to bring on some shit. Where they at? I'll bring it, biatch!" 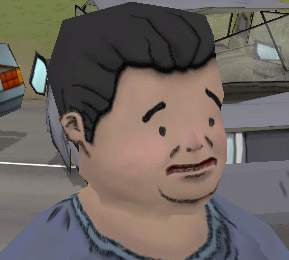 The next generation of video games is clearly upon us.

Anthony yells at random people in traffic as he's crossing the Santa Monica Freeway with his shopping cart. Every single line uttered is annoying and unfunny, including the part where Anthony decides to take a dump in the middle of the road. Maybe something funny could have come from this scene, but like everything else in the game you are expected to laugh just because it's so darn edgy. He's pooping? Wowowow! I hope someone pushes the comedic envelope by puking! (They do, mere minutes into the game.)

As Anthony drops trou to do his business, he looks up and sees a low flying plane swoop down and crash into a nearby overpass, sending biological agents into the air. Now the game finally begins and you get your first real glimpse of the game in motion.

There are few experiences in life as painful as looking at Bad Day LA. One of these things is actually playing the game, but we'll get to that later. Another is giving birth to a pineapple, which, while painful, would ultimately be an experience you could look back upon with some degree of sentimentality. "Remember when I gave birth to that pineapple? Man, what was up with that? It was a blessing in disguise when Jacob fell victim to Infant Death Syndrome a few months later. You wouldn't believe how difficult it was to find clothes for him."

Bad Day LA leaves you with no such fond memories.

Models and textures are straight out of a Quake 2 mod based on the Nickelodeon cartoon Doug, only not as good. Splotchy and pixellated skins are slapped atop low poly character and object models, then everything is haphazardly dumped into a generic environment that makes you feel sort of sad inside. This game doesn't bring a simplistic art style to life, it tries to use said style to hide the worst model, texture and map work since the original Zork. Some special effects such as explosions, gas, and fire, are rendered in a completely different and semi-realistic method that clashes with everything else that's already busy clashing amongst itself. With all this clashing you'd think one of the visual elements would sustain a serious injury and die, but unfortunately that's not the case.

The very first character that you see is a squirrel that says, "Nutty! Squirrels offering survival tips?! Dude, you've suffered a severe head injury." Score another point for team hilarious! How do they come up with this stuff? If there are monkeys in this game, it might be too funny. Like, dangerous funny. Paul Reiser funny. 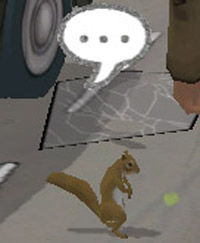 "Do you not see how my presence is both off the wall and side-splitting? This might even be irreverent!"Once you've talked to a few more people and completed the most boring video game tasks in recent memory, you'll notice that Bad Day LA features voice acting so horrible they would have been better off just looping a Wilhelm scream every time someone talks. Lines are delivered with all the emotional impact of someone nodding off to sleep, which leads me to believe that the voice work was done by playtesters following a 10 minute session with the game.

The gameplay is horrendous. Movement is awkward, collision detection is clumsy, and there is no "feel" to your character's actions. Using a tire iron to bash a fence (which you will have to do ad nauseam and only in predetermined spots) produces practically no visual cue to indicate that your swings are contacting until the fence falls apart in a prerendered animation. When you attack other people their reactions are incredibly weak. They look like they're being tickled momentarily, then remembering they aren't ticklish.

It's like nothing you do has an impact on the world, which is way too realistic for my taste. Look, I am the quite possibly the weakest man on Earth. I play games to experience the sensation of pulling off impossible feats like throwing people through walls or shooting laser beams or running. At least make it feel as though I'm not a frustrated ghost whose slow-as-molasses attacks pass through man and poorly modelled object alike.

NPCs skate around randomly at breakneck speed and there are only a few models for the civilians, which means you'll see four instances of the same person orbiting you like the most annoying and pointless planets in the universe. Even better, you will randomly come under attack from certain civilians without having done anything at all to provoke them. There's nothing quite like watching your life plummet as you scan an erratically moving crowd of identical people for the one asshole who's throwing toilet paper at you.

If you decide to keep playing for some reason, you will take on a multi-part mission spread over a large area with no indication as to where you need to go, get lost in a neighborhood of cookie cutter backyards, and experience so much painful self-aware dialogue that Brian Michael Bendis' comics won't seem so bad after all.

Considering the game's forced edgy attitude, it's something of a surprise that your character's main goal is to help people with fire extinguishers and band-aids. Everyone is an asshole, including Anthony, yet he wants to save people? No. Asking me to do anything other than murder a character in a video game requires me to care about that character in some way, and all I want to do is destroy everything in this game with my bare fists that magically pass through solid objects. If you attack a civilian, your Threat Advisory level (I'm not even going to get into that one, my head hurts enough as it is) drops and everyone starts attacking you. Everyone. This isn't the kind of combat you're used to though, it's the kind where there is absolutely no fun and your enemies just sort of throw things at you from a distance as more clones appear to replace the ones you managed to tickle to death.

Just as Alice took existing material and showed a lack of creativity by dumbing down and "darkening" an already dark tale, Bad Day LA stubs its toe on the foundation laid by South Park. It has a simplistic style, it has politics, it has poop and puke, it has over the top violence, and it has characters saying crass things. It just has no idea what to do with any of it, aside from fuck up.

In fact that's just about the only thing the game does right. It fucks up spectacularly, on every conceivable level with unmatched skill and precision. I can only recommend the demo to masochists and people that I really hate.