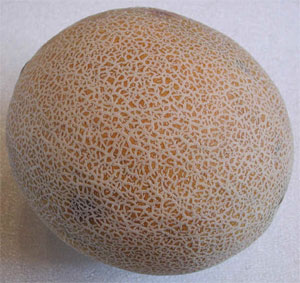 The first melon posed little challenge to Big Melon Crush, as did the second. The third and fourth took their tolls. The boy's forehead was covered with a mixture of fruit juice and blood. His breathing was heavy, and he wobbled from the weight of his own large head and the disorientation caused by the impacts. The fifth melon, known to the crowd as "Iron Melon," proved Big Melon Crush's greatest challenge yet. The first time he slammed it against his forehead it didn't crack. It was only on the third hit that it split into two halves, releasing a burst of juice and blood in the process.

The sixth melon was even more painful, requiring Big Melon Crush to smash it against his head seven times. By now he was bleeding profusely, and his eyes were soaked with blood, tears, and fruit juice. The crowd was growing uneasy. What once enticed them was now making them sick. Women and children were vomiting, and the enthusiasm was fading fast. Now people cheered for Big Melon Crush to stop.

He didn't stop, lifting the seventh melon into the air and letting out a deafening roar. Something changed in the father, who saw his son in a new light. Here was a boy sacrificing everything for the one thing he was good at. The father became acutely aware of his own misconduct, and felt deeply ashamed. He ran to his boy and begged and pleaded with him to put down the melon and stop. The boy didn't understand, and pushed him out of the way.

He hammed the seventh melon against his skull over and over again, blood splattering outward. He screamed and cried. Finally, after twenty hits, the melon split evenly and the crowd let out a collective gasp. They hoped it and prayed it was all over.

The chief relished every moment, knowing the boy wouldn't last much longer. Once the boy was out of the picture, he alone would command the respect of the village. He smiled knowing his plan was almost complete. The boy was inching ever closer to the false melon, the reckoning rock, and to certain doom.

When the boy smashed the eighth melon against his head, it flew out of his hands. He staggered to retrieve it, stumbling to his knees, but getting back up. By now the crowd was begging him to give up, to throw in the towel. He wouldn't. He knew only one thing. To him, this is what they wanted. This is what they always wanted.

He pounded the melon against what remained of his forehead, beating it relentlessly and screaming until his voice was shrill and broken. Few remained in the crowd, and none of them were happy. When the melon finally cracked, they all said silent prayers and begged for forgiveness. Had his father remained, he might have fallen to his knees and thanked the gods. But he had long since deserted the village, unable to watch his son continue.

When Big Melon Crush got to the false melon, he knew right away something was wrong. His unique understanding of melons and their composition told him all he needed to know. Like a machine, he examined the object, determined it wasn't a melon, and cast it aside. The crowd breathed a collective sigh of relief.

The chief was angry, though, and quickly scolded the boy. He accused him of letting everyone down, of not doing his sacred task. The villagers were sickened by the chief's actions, and some had even noticed the unusual qualities of the last melon. Big Melon Crush's heads were soaked in mortal juices, and that was enough to wipe the paint off, revealing the rock for what it was.