The Grammy Awards ceremony doesn't air until Sunday, February 8, but most of the lower-profile categories have already been decided. The trophies were presented with little fanfare in a hotel lobby, and without any rolling television cameras, the recipients were free to be candid. Something Awful was there to record the results.

Wow! Well, first of all, I gotta thank 3 Doors Down, Staind, Black Tide and the rest of my bros, not only for making my kinda albums, but also for taking the heat while I lay low. You might not know this, but all the small touches - that fucking "ohhh" during the Plain White T's song, that Machine Head album where they went all rap-rock, that laughing-monkey thing the Disturbed dude does - those are pure Johnny K, man. I'm the little birdie giving them those ideas, which they turn into a razor-sharp beak pecking your ears into bloody pulp. 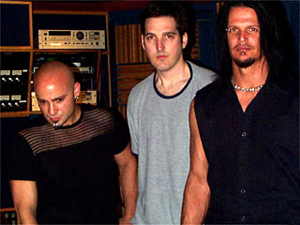 I can do whatever I want, without repercussions. No one even knows my real name! And look at this picture: Which guy would you want to punch first? Yeah, well I'm the dude in the middle, escaping while you pummel their piercings into their skulls. You'll forget all about me, but maybe the next time you hear, say, Drowning Pool or Finger Eleven, you'll vaguely suspect that some shadowy puppet-master is to blame. But I'll already be off to my next assignment, making someone else crappy sound even crappier. I couldn't have done this without all those horrible bands, looking for someone to polish their deuces. Just call me the shit-shine man! Johnny K is outta here, baby! 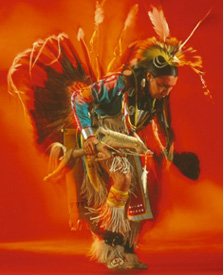 How! Well, first of all, I gotta thank the members of the National Academy of Recording Arts and Sciences for being so knowledgeable about Native American flautists. It's reassuring to know that if all the nominees were to dress in eagle costumes and dance while singing in traditional tongues, they'd immediately recognize my distinctive style. You might not know this, but I taught myself to play the love flute. Why do you laugh?

For so many years our culture has been erased and ignored, but now it's celebrated by the music industry with the presentation of a gilded miniature gramophone. We've learned so much since the ignorant age of 2004, when the rap group Outkast made a mockery of our powwow feathers during the Grammys. Come to think of it, I believe a good percentage of the Academy voters (those aged 125 and up) lived through the Wounded Knee Massacre, so they really know how far we've come. Now, repeat after me: "Hoka hey." That means "once you start, there's no turning back." I believe that someday, a Native-American might get to appear on the telecast, maybe even as a performer. Also, we must - I wasn't done yet, get away from me! Hoka hey! 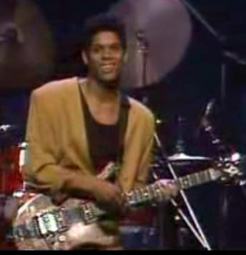 Ain't this a bitch. Well, first of all, I gotta thank Joe Jackson, because if I hadn't covered that little bug-eyed troll, ya'll probably wouldn't have known I'm still alive. I'm Stanley fucking Jordan! I can two-hand tap your pressure points until your spine quivers like a torn-off tentacle. I do shit Dragonforce couldn't imagine, even in their fairy-ass medieval fantasies. You might not know this, but I can play two guitars at once. I can convert any mathematical or natural phenomenon into sound patterns you'd immediately recognize, like "hey, that's the fucking Dow Jones average" or "goddamned if that isn't a typhoon."

This dude came up to me once and said "man, you look like a total homo, but you're a bad-ass guitar player." That's cool, I can respect that. I might wear some turtlenecks with shoulder pads. I might play some smooth massage-spa jazz. And I might cover some old-ass white people. That's just to make you folks comfortable, real at-ease like. But the Stanley Jordan revolution is comin', ya'll, and you Grammys bastards will not be spared. 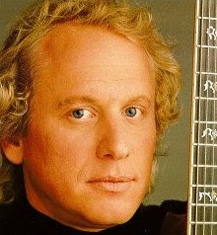 Thank you. Now, every one calm down, take deep breaths and embrace your essences. (Closes eyes, goes into brief trancelike state.) I'm just fucking with you guys. Hell, I'd like to find the person who coined "new age" and pound his face like a fucking drum circle. Not that I don't accept all kinds of awards with that bullshit phrase inscribed right on the base. You might not know this, but I used to own Windham Hill, and I had this dream of it being a haven for fringe folk geniuses and virtuoso instrumentalists from many lands. Then that "new age" thing hit, and all our releases ended up in incense huts and Nature Company displays. Speaking of which, I was glad when that place went out of business. You can only get my new album Meditations at Target, not some goddamn hippie store. It's also on Amazon, under Home & Garden, for whatever the fuck reason.

I can win a Grammy in this category no matter what I do, because this genre is so fucking useless. I mean, I won in 2004 for Returning, and all I did was fuck around with some of my old songs. And on Meditations, I rework those same songs again! See you back here in 2010, after I unveil yet another fucking version of "The Bricklayer's Beautiful Daughter," which will dominate whatever faggoty competition they give me. Seriously, one of these records is called Peace Time, another is called The Scent of Light, and a third is from something called "The Healing Series." As for the fourth, have you actually heard Will Clipman? Nice "corn goddess whistle," fruitcake. 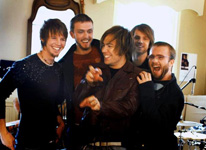 After Edmund: Awesome. Well, first I gotta thank God. And I would like to express my gratitude to the Christian audience for being so forgiving, not only in the unconditional-love sense recommended by Jesus the Savior, but also meaning that they're willing to put up with bland rock simulacra for the Lord's sake. If you secular folks can imagine a band fitting the description "like The Fray or Snow Patrol, but lamer," we're your guys! You might not know this, but one of the dudes in our band has the biggest mouth God ever forged, and he uses it to sing, spread the Gospel and eat the holy heck out of papayas.

Sanctus Real: It's like we've all come together in this category, unifying to see God's work done through us. Except Flame. Maybe he's a false prophet, or perhaps the Lord doesn't believe that rap music is an appropriate vessel for his sacred message. What? Yeah, that dc Talk, "Whoopsi-daisy, call me crazy" thing Toby does, I don't think that really counts. Anyway, first we gotta thank God. In fact, let's have a moment of silent prayer, then let's continue that through the speeches Superchic(k) and TobyMac were going to give, if that's okay. It's like they say, too many preachers spoil the sermon.