The crowd turned on the chief, calling him a phony and a bad sport. He became defiant, cursing the remaining crowd, cursing Big Melon Crush, and cursing the entire village. In his rage he picked up a melon and attempted to smash it against his own head. In doing that, he would prove Big Melon Crush was nothing special. However, the chief overestimated his own forehead, and cracked it wide open. He dropped dead. The entire village was left in stunned silence.

With the grim spectacle over and the gauntlet conquered, everyone returned to survey the radically changed political landscape. The chief was no more, and the only one left standing was the man with the big head. They gathered around him, taking turns touching his forehead. When it was all said and done, Big Melon Crush had been appointed their new leader by silent voting.

He wasn't a very good leader, primarily because he was still only good at one thing. But the villagers felt comfortable with him, and respected his sacrifice on their behalf. Though he still smashed melons with perfect precision, they took it easy on him, often discarding harder melons in the jungle in favor of softer ones.

It was some years later when a white doctor heard the story of Big Melon Crush. He was treating a horrific outbreak of prospector's knee, which had been plaguing a village some 30 miles from Big Melon Crush's home. The doctor, intrigued by the tale of the giant-headed man surviving a gauntlet of vicious melons, immediately packed his things.

A week later, he came upon a quaint village and observed an abnormal amount of melon casings lying around. He knew he had arrived. He was greeted graciously by the villagers, who ushered him to the center of the town where Big Melon Crush sat on the throne they made him. Big Melon Crush didn't make any facial expressions, and rarely ever acknowledged anything that wasn't a melon. As such, he responded to the white visitor with a blank stare.

The doctor wasted no time in examining the bulbous head, which rested atop Big Melon Crush's body like some great moai statue. He muttered to himself as his fingers navigated around the curves, dents, and protrusions of the giant head. His digits moved with tender care, gently caressing the surface and scanning for faults, cracks, and signs of trouble.

When he was done there was but one diagnosis: if Big Melon Crush smashed even one more melon against his head, he could die. The cranial wall was too weak, and in grave danger of collapsing. Big Melon Crush didn't understand this, but the villagers all did. If he were to continue crushing melons, the one thing he was good at, he would die.

The doctor didn't stay long. He was called away to deal with a catastrophic outbreak of carpal tunnel syndrome wreaking havoc on yet another settlement in the jungle. But the villagers were left in turmoil. They depended on Big Melon Crush for bountiful harvests, good hunts, fertility, and so much more. And yet, each time they asked for such an offering, they did so at great risk. 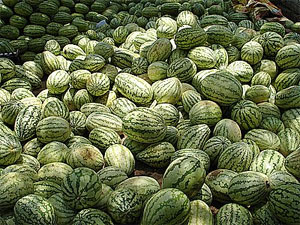 Big Melon Crush remained indifferent to this as he did to most all things. If he were a man who reasoned, which he most certainly was not, he might have reasoned that there were millions of melons in the jungle. If one was fated to do him in, then that still left millions more melons to safely crush. That is what the old chief would have reasoned, anyway.

Big Melon Crush didn't consider that it was the simple act of crushing melons that made him special. If he gave up smashing them, he would just be a strange man with an abnormal head. He would become a burden to his village, unable to offer anything back save for a blank stare. He didn't consider any of this. He simply saw the melons before him, and he knew what he to do.