The villagers made a habit of smashing melons over Big Melon Crush's head whenever they saw him. Most made special trips out to gather melons just so they could. Habit soon grew into ritual and ritual gave rise to superstition. It was good fortune to smash a melon over the boy's head. If you failed to do so prior to going on a hunt or performing a task, you risked the wrath of the gods. And nobody dared eat a melon that hadn't first touched his head.

Songs and tales were written celebrating Big Melon Crush's deeds and the many melons he conquered. Word spread far and wide, to neighboring villages. Sometimes large envoys would arrive to meet the boy. The great jungle elders were impressed, and took home perfectly halved melons and stories to share with their constituents. 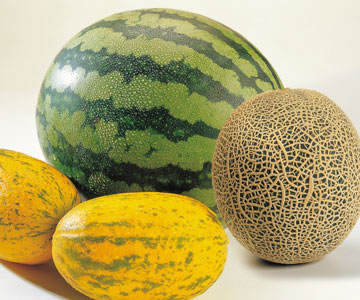 Big Melon Crush had no privacy. He was the most famous person in the jungle. Rarely a minute went by that someone didn't hurl or slam a melon into his head. He didn't mind. He didn't even know how to mind. At night bandits would sneak into his hut and smash melons over his head as he slumbered. Big Melon Crush became so used to this act that when somebody didn't smash a melon over his head, he would wander the village streets moaning until he could find a melon or someone would bring him one.

When men from the village would go on long hunts, they would maintain morale by swapping stories and songs honoring Big Melon Crush. "Do you recall the time we smashed that one large melon on his head?" one hunter might ask another. It was on one of these trips that the story of Big Melon Crush spread to a washed-up hunter from a nearby villager.

This former hunter, now retired due to a groin injury, was once well known throughout the jungle for his prowess stalking prey. He was equally known for his womanizing, and had fathered children in many villages. Now that his best days were behind him, he was eager to find a new way of eking out a living and earning respect. Believing Big Melon Crush to be his son, he returned with the hunters.

The father inserted himself into all aspects of the boy's life. He appointed himself Big Melon Crush's manager, and nobody was to even so much as think about cracking open a melon without first going through him. He fleeced the villagers for everything they were worth, knowing they were completely dependent on the boy's gigantic head. The father discovered a new source of power and respect, demanding ever-larger payments from the villagers. An egg one day, a whole chicken the next. There was no limit his demands, nothing too taboo.

During this time the chief had become increasingly bitter, conspiring to do in the boy. He found a willing partner in the father, who only cared about cementing his legacy. The chief endeavored to break the boy by putting him through a gauntlet of impossibly hard melons. He ordered the few remaining villagers loyal to him to go out into the jungle and return only when they found the most devastatingly hard melons imaginable. For the grand finale, the chief painted a rock to look like a melon, knowing that if Big Melon Crush somehow made it past the real melons he would never make it past the rock.

The father was quick to volunteer his boy for the event, and spent days hyping it up to everyone in the village. He sold tickets and collected bets, and showed off each of the impossibly hard melons. "Devastator" he called one. "Skullbuster" and "the Commie Cantaloupe" were some others he identified by name. The villagers ate it up, hungry for a bloody, juicy spectacle of melon smashing.

When the time of the event arrived, the village was packed. Hundreds had made the journey from neighboring communities. Storm clouds gathered overhead, but a festive mood prevailed. Some had traded their entire fortunes for a chance to sit in the front row, or "splatter section" as the father called it. They would taste the sweet melon juice on their tongues, he promised.