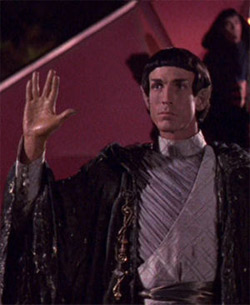 Ugh, Vulcans. They always make you feel like a dick, but they do it in this way where you can't just punch their clock.Day One - I whipped up some sketches for a cost-effective decontamination chamber. I don't know what the big deal was and why these guys were having so many problems. I just stuck a broad-spectrum fumigator vent in the ceiling and a ventilator in the floor. Thirty seconds in a thick cloud of delousing gas and basically anything will be dead. Couple that with UV lamps to cook off the surface contamination and we're in business. I should have a prototype ready for testing inside a week.

Day Four - The prototype is ready to roll. I added a drop point for clothes that will connect to an incinerator once it's installed in the ship. I've already run through some tests with the sensor dummy and the system is operating within safe limits for a human.

Day Five - Bad news. Vlad the Recliner tells me some Vulcan advisor named T'Pol has taken a personal interest in the project. He's coming down on Monday to "assist" with the final prototype trials. That means everything is going to get screwed and he's going to demand all of kinds of superficial (but time-consuming) tweaks that just aren't in the budget. Naturally, Vlad and the other do-nothing engineers in decon are going to be taking the day off.

Day Six - Uh...heh...well. Ahhhhhh, I'm not sure how to put this. That Vulcan advisor named T'Pol? Yeah, that is not a dude. In fact, other than the haircut it might be as far from a dude as possible. I am talking goddamn smoking hot. I wish there was a word for when you don't just want to stick your unit in something, you want to break it off in there to jam the lock.

She shows up in some sort of form fitting outfit that looks like my grandma's wallpaper and demands a tour. Once I roll my tongue back into my mouth I show her around the prototype and tell her I'm going to be doing run-throughs if she would like to observe. She observes the first one to get a feel for it and then she just jumps right in. 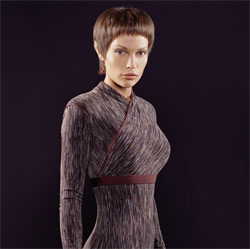 Hey, Mo! Check out this monster boner I just popped!"I would like you to demonstrate the system on me," she says, and then here is where I would put that word for me snapping my unit in half.

These Vulcans man, they have no sense of shame. I start walking her through the decon protocols and the third step is straight up, "Remove clothing and drop into incinerator chute." Before I can even tell her that we can skip that one she just drops trou and pops those bad boys out of their hammock.

Let's just call that word "Hrrrnk" so I can stop explaining it every time.

I don't get a great look because that damn decon fog starts blowing in through the vents, but I see enough to fill my "me time" calendar for the next decade. After the ventilator sucks the fumes out and she dresses she is all, "That was very logical and I approve."

That's when inspiration strikes. If I could build a decon chamber once, who is to say I can't do it again? And why couldn't I include a few "improvements."

I tell her that the data is all screwed up and despite appearances it doesn't look like this prototype is going to pay off at all. I tell her that I plan to build a new prototype and that she should come back next week to assist in further testing. I don't think Vulcans can feel glad or anything, but she didn't argue so I think I am in good.

Awww, shucks! Back to the drawing board!