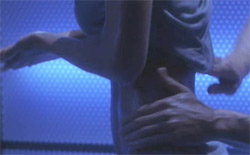 Don't want to miss a spot!Day One - Paul Harrison urgently wants to know when I will be finished. I think he plans to take credit for my design. I tell him not to worry. Throughout the rest of the day, and almost in sequence of ascending position within decon, the other engineers approach me to ask when we'll be done. Vlad comes last.

"Ve are all very concerned," he says. "Ve think maybe you are not knowink how to solve problem."

I tell Vlad to trust me. I promise him we'll be done by the end of the week. I don't think he believes me, but at this point I'm pretty much living in a whole other world from those losers. I just stare off into the distance and see two majestic unicorns, covered in Jell-O, fighting forever and ever.

Day Three - The final prototype is pretty much done. It's as barebones as this sort of thing can get, and I think that is why it's going to be the piece da resistance of my prototype series. It's got a couple benches, slow-burn UV cookers, bottles of decontamination rubbing oil, a case of beer, and a boombox with some godawful Vulcan CD called "20 Classic Songs to Inflame Your Plak Tow."

Day Five - T'Pol shows up about ten minutes early and I'm still setting things up in the prototype.

"I know what you're trying to do," she says. "Do not think I cannot perceive such things."

My heart drops to my gut.

"You are trying to expend every last dollar of your budget," she leans in closer. "Do not attempt to deny it." 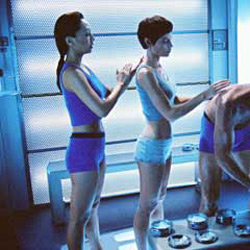 Advanced decon techniques. Don't try this unless you don't care about your relationship.She folds her arms over her huge chest. Goddamn. Those frigging lips. Hrrrnk.

"I suppose not, although your methods have been very unorthodox. When I mentioned them to Vulcan High Command they were very impressed that you humans are trying so hard."

"The ah," I crack open a beer out of habit and take a big swig, "the prototype."

She nods. I show here how it works and run through the procedure.

"I couldn't get anyone else on such short notice," I try to sound sheepish. "We're going to have to test this out together."

"That is acceptable," she says and begins to disrobe.

I could lie and tell you that it isn't awesome. No, there's no actual sex, this is a TV-PG facility, but it doesn't even matter. When I ask her to turn around so I can do her front she doesn't hesitate for a second. By that point she doesn't even have to touch me. I'm finished. 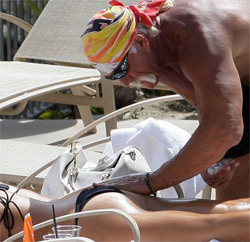 I may need to develop some field decon procedures as well.If this is the future of space exploration, then sign me up.

"Other than your unusually localized and sudden projectile sickness," T'Pol begins, "I think that was very effective. Perhaps almost pleasant."

"Yes," I agree, "and cost effective. Just remember, sometimes the crew may have to have same sex groupings use the oil. It won't work when it is two or more dudes, but it will work if it is two or more babes."

"Females!" I correct myself.

"That seems very unusual," she arches that damn eyebrow again.

"Yes," I explain, "well, matrices and data and output and decimals; they all point to the same conclusion."

"Ah, thank you for your time," T'Pol finishes dressing. "I will notify the project managers of your excellent work."

Once she's out of sight I switch off the holocamera and reach for my pack of cigarettes.

I think vulcanlovechamber.com has a nice ring to it.

Sorry babe, you're gonna have to stay in quarantine another 30 minutes. This German guy just paid for extra time.Ever since that day I have been trying to get myself posted for duty aboard the supposed Enterprise mission. I almost made it last week, but the urine some guy at the bus station sold me did not pass the drug test.

I admit, it does bum me out a little that I'm not going to be along for the ride. There are a lot of things I am going to miss.

Things like, say, greasing up a Vulcan sex goddess and her sassy Asian friend. Or some sort of space robot that looks like a hot chick. Or a dude worm in a hot chick's body, only she has these little sexy dots on her head. Or some babe with a bumpy nose with really huge...well, really any hot babes who need to get clean, but want to feel dirty.

On the other hand, I will still get to enjoy the hot and heavy fun going down in that decon chamber. The installation of the prototype went exactly according to my design.

Right down to the webcams.