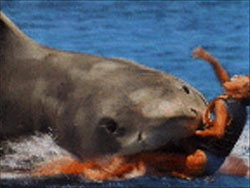 Shark! Shark! Shark attack! This shark eats like a maniac!In the 1987 movie "Jaws: The Revenge" the titular shark is prowling in search of revenge against the wife of the man who killed him. Think about that one for a second. That sort of thing might work with Jason since he's magical like a griffon or something, but Jaws was just supposed to be a really big shark. We were all working under the belief that his only power was being huge, if Jaws has the power to either return from death or be reborn as an adult giant shark then that totally changes the equation. What's the point of even trying to stop him? Just stay the fuck out of water if he can in any way implicate you or a relative in his death.

The Internet Movie Database lists 14 "goofs" including continuity and factual errors for "Jaws: The Revenge." One mistake listed is that in one scene the hands of a man striking drums in the background do not match up to the drumbeat on the soundtrack. There are no "goofs" that point out the fact that "Jaws died in the first movie."

Evidence of the existence of giant squid was first found in the form of sucker scars on sperm whales and their enormous beaks found inside the whale's stomach. Giant squid beaks in the stomach of sperm whales are believed to be one of the prime sources for ambergris, a valuable substance used in making perfume. When a whale swallows a giant squid the sharp beak creates a concretion of bile and this brown and horrible-smelling sludge is the prized result. Giant squid have been found washed ashore and this year the inscrutable Japanese managed to take footage of one alive in the deep sea. To date no giant squid has returned from the dead to kill the wife of the sperm whale that killed it.

Near the end of September Michael Crichton, author of a number of books like Jaws but not Jaws, was asked to testify in front of the US Senate on the subject of global warming. 900 peer-reviewed studies supporting the idea of global warming were apparently insufficient and a real expert like Crichton had to be called in. Crichton's book "State of Fear" centers on the idea that global warming is a lie created by a group of eco-terrorists to further their agenda. Sort of a "Protocols of the Learned Elders of ELF" I guess, but real meat-and-potatoes science for the people banging pots over their head with a wooden spoon. 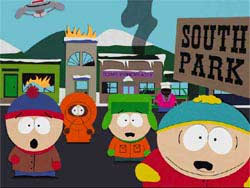 Liberal+Conservative/2=South ParkSouth Park recently did an episode about global warming along the same lines as Crichton's book. God knows I didn't watch it because I can get my fill of juvenile quasi-libertarianism from the Internet, but I'm guessing from the commercials I saw that the episode was about how liiiiiiieeeeberals keep making up these ridiculous doomsday scenarios about global warming that never come true. Thanks for setting things straight, South Park. I know I can rely on you to get to the bottom of issues of global importance and then thumb your nose at them and say "here's a song where Cartman calls someone a bitch." Then at the end you can have Stan give a completely straight-faced restatement of your heavy-handed yet wholly sackless political opinion in case the crayon-eating untrainables who still watch South Park failed to get your point. I'm all for moderates in politics, but there's a difference between being a moderate and just picking a point in between two opposing views on a topic. Let me give you a couple examples of why this sort of indecisiveness is so moronic.

It's this sort of incisive political satire that America has come to love from our friends in South Park!

For some horrible reason I decided to start reading books by Jeff Long. His books are actually pretty good, but if you try to explain the plot of any of them people will laugh in your face. So far I have read both "The Descent" and "Year Zero" and both times I was met with blank stares when I tried to summarize the plots.

"The Descent" is about how the government finds out that there are tunnels that go deep into the earth's crust and they are full of these savage mutated people and their leader is Satan. Not like "sort of Satan" but really the dude Satan. "Year Zero" has an even more laughable plot. It's about these guys looking for the remains of Christ after an earthquake and they find some vials of crap and when they get opened they unleash a disease that turns people's skin transparent and makes them stop caring about everything. But wait, it gets better. This evil scientist dude in a wheelchair has discovered a means of cloning adult humans and they actually have their memories from when they died. So the only way to try to cure the disease is to make clones of a bunch of people from the time of Christ and…dun, dun, dunnnnn one of them says he's Jesus.

Jeff Long has a real knack for building these preposterous plots up into semi-believable storylines. Reading his books is not going to make you any smarter, but you will read them really quickly. My favorite thing about Jeff Long is that he worked with the UN detailing genocide in Yugoslavia and he is an avid mountain climber. If you know these two things before you read any of his books it will drive you fucking crazy because he constantly makes references to them and all of his main characters are of course totally into mountain climbing. I guess I'm pretty fucked because I'm not going to get a lot of mileage out of my "dudes who love to play EVE Online" character backgrounds when I'm writing my great American novel.

I also can't quite figure out if Jeff Long is writing for the "Omega Code" crowd or if he really just wants to trick Kirk Cameron into starring in the film adaptation of one of his novels. He obviously steeps all his plots in Bible 101 bullshit, but his take on religion is always somewhat ambiguous. There are just enough hosannas for a recommendation from the evangelicals and just enough bloodshed and apostasy for the "we don't really give a fuck" majority of America. 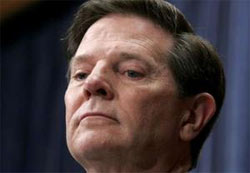 "We have such sights to show you!"Speaking of the majority, who isn't happy about all of these assholes in Washington finally getting what they deserve?

Tom DeLay is going down and the fact that he is going to bite the dust because of some two bit money laundering conspiracy charge is like bringing down Capone for tax evasion. The guy helped engineer a slave labor ring in Saipan so that corporations using the Marianas Islands as a shelter could entrap laborers there, pay them virtually nothing and then stamp "Made in the USA" on their products. They would go around to these Asian shithole countries and be like "come work in America" and then they would ship them to Saipan and restrict their visas to the island so that they could not possibly leave. I shouldn't say it in the past tense either, as far as I know the little machine DeLay has helped lubricate by orchestrating and blocking any regulation is still running along nicely. A comprehensive list of all of DeLay's sleazy dealings would occupy ten entire articles. The guy is just human waste.

And Bill Frist, what a ghoulish retard. The joke of a doctor who diagnosed Terri Schiavo from a videotape and is known for adopting cats to conduct dubious medical experiments on them is getting worked over by the SEC. That fucking clown refused to admit to a conflict of interests and instead made a pitiful attempt to hide his insider trading while passing Medicare legislation that affected the price of his own family's corporation. Even the mighty Rove is going down. He's the fat-faced cunt who famously faked an attempt by the Democratic opposition to bug his candidate's offices just as his candidate was tanking in the polls and the man who conducted a campaign to smear John McCain as being a race mixer. Of course the Democrats are doing a whole lot of nothing, but I think I can hate these Republican sleazes and take joy in their demise without actually liking the Democrats either. See, I'm like South Park! I found a nice middle ground of hating them all. 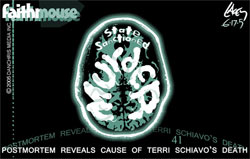 Dan Lacey: voice of reason.As for Bush, well, you won't hear me complaining. He's imploding on national TV almost every day. Every appearance is full of jaw-grinding, nervous tics and minute-long pauses. It's sort of pathetic and it makes Kanye West's awkward tirade look like the Lincoln-Douglas debates. People who think Bush is just stupid, though, are giving him a loser's limp. The guy is as smart as 90% of the other politicians in Washington. It's his homespun folksy act that's fake and that's cracking like a pane of sugar glass with a cowboy thrown through it. He's just another insular politico from a long line of insular politicos. He's the sort of person who thinks everyone owns helicopters and has their kitchen restocked once a week by a crew of Mexicans in coveralls. He refuses to back down and "stays the course" because he never learned a single goddamn lesson from any mistake he made besides being a mean drunk.

Maybe one day Bush will understand that there are real and tangible consequences to mistakes. Maybe he'll fuck up and order the Navy to bomb the wrong patch of ocean. Then he'll learn. He'll learn not to kill a shark and then go swimming, because that dead shark might just harbor a grudge.