Somewhere between madness and what is commonly accepted as sanity, there is a line. That line separates those who are weak and defenseless in our world and those who represent all that is depraved, amoral, and destructive. You and me, rookie? We straddle that line as best we can. Sometimes we must stray farther into the madness than we'd like, but when that happens we must remind ourselves that we do so to protect those who are unable or unwilling to do what's necessary to protect themselves. You cannot face the darkness day in and day out without it affecting you, and in time you will learn that committing deplorable acts is sometimes a necessity. You may not want to believe that now because you're practically a newborn and your soft head is still stuffed with the airy fluff of idealism instead of the solid foundation of experience. How far are you willing to go, boy? How much of your humanity will you sacrifice so that the innocents can eat another meal come tomorrow, blissfully unaware of the struggles which men like you and I constantly face?

What's this? You're not going to quit like the little bitch you appear to be? Good. With a hell of a lot of training and even more luck you might make something of yourself. Eventually. For now, just keep your mouth shut and follow my lead. I don't know which superior I pissed off enough to get stuck with a shitty assignment like showing you the ropes, but stick with me and maybe we'll get through this day alive. 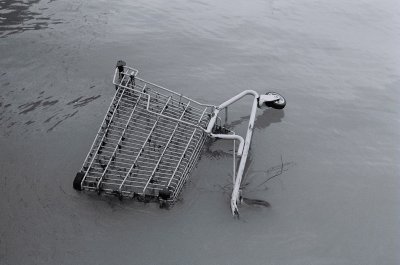 Come with me, and I will show you fear in a handful of coupons.First we have these, your standard issue shopping carts. Wheels that randomly stick in one direction just to veer you off your chosen path and into the waiting arms of peril. Some sort of mysterious Ghostbusters-ass endoplasm coating the baskets and handles. Undercarriages that collapse under the weight of just one bag of dog food, and I ain't talking about some forty pound bag of Alpo, I'm talkin' those little two pound bags of puppy food with names like Nutri-Being and Healthful Choice. These carts are nothing short of a pain in the ass, but imagining a world without them for even a moment makes me want to take this 9mm and blow my sorry brains out all over aisle seven. No, you don't get a gun. Not yet, at least. You must collect these carts from the parking lot at every given opportunity, you got that? If you're not Johnny-on-the-spot with these things, all is lost. You may think you know tragedy, but there is no way you've truly understood it until you've seen firsthand the face of an old woman with nowhere to put her Ensure and adult diapers. Nothing can prepare you for the moment a stray shopping cart that you failed to collect is blown by a stray wind into the rear quarter panel of a parked car. When that car's owner drops to his knees in anguish and he lets out an inhuman cry as he loses his faith in God, it changes you. Shopping carts are the vehicles which outrun the devil and deliver us unto salvation's checkout lane. Lose control of just one, and you will find yourself swallowed whole by forces you cannot overcome.

You might think that bagging groceries is the most complicated part of the job, but it's incredibly easy. Just remember that the public has no idea what's good for them and to therefore ignore any special requests as to the order in which groceries are placed in each bag. They might get mad at first, but in time they'll see the logic behind putting the egg carton on top of the bread, and the gallon of milk on top of that. Paper bags are entirely too much of a fire hazard, so loudly open up a plastic bag and place the first item halfway into it before asking the obligatory "Paper or plastic?"

This is the ice cooler, which must be stocked at all times no matter what else is going on. This is vitally important, okay? Swear to me that you will never let the supply of ice run out. Yes, I know there's a gun in your face, I'm the asshole holding it. I don't care how uncomfortable it makes you feel. Just swear to me! Good. Good. I.. had a partner once. He was young like you. Hell, we both were. It was the fourth of July and people were practically clawing at one another to buy ice, so we agreed to take turns checking the machine's supply. My partner stepped away from bagging groceries momentarily, and by the time I realized something was wrong it was entirely too late. The cooler had been empty, and my friend was now dead. Do you see the film of crystallized condensation here on the cooler's walls, how they form a carpet of sorts? On that God forsaken summer day, that impossibly white surface was juxtaposed with the dark red droplets of my partner's blood. Still hot, that blood bored through the ice like hot blood through butter. It was incredibly dangerous to leave the cooler empty for even a moment longer, so we stocked it until it was full again, burying my partner's corpse below a hundred plastic bags of frozen water with identical caricatures of a sardonic penguin printed on them.

It should have been me that died that day. It was actually my turn to check on the cooler, but I was too busy flirting with a cashier to fulfill my duties so my partner stepped up in my stead. I often wonder how things would have turned out if I had gone to check on the ice. I'm pretty sure something really awesome and unpredictable would have happened, like World War Two would still be going on or we'd all have gills and be deathly allergic to salt.

Every once in a while be sure to give each aisle a once-over, keeping an eye out for labels that are not perfectly facing forward. If those labels are not visible, madness will follow. People will have no idea whether a can contains soup or condensed milk or rat poison, and in the confusion many will simply give up and starve to death. If you don't believe me, just look at how difficult it is to keep people who wander into the ethnic foods aisle from thinking they've wandered into another country. If it weren't for that recording that says "You are in the United States of America. Rock and roll. Cowboys. Electricity." over and over again on the PA system, we'd have twice as many deaths in that aisle each day as we do now.

That about does it, kid. We made it to our lunch break without a single fatality or shot fired, but such a lengthy period of calm concerns me. Keep an eye out while you're in the break room, I've got a hunch that some crazy shit might go down in there. Meet me back here in half an hour and I'll explain the importance of expiration dates on the dairy products, how the constant struggle between fresh and expired foods being displayed is a war without end despite the government's falsely optimistic proclamations and their "Just say NO to expired yogurt" propaganda posters. Welcome to the front line, kid. Say goodbye to everything you thought you knew about the world you inhabited.