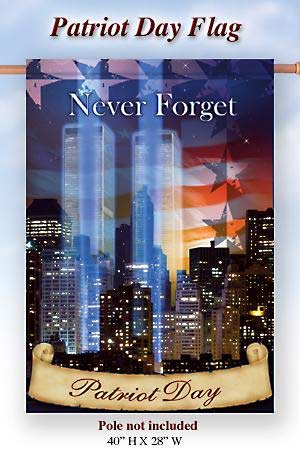 A lot of people died tragically on September 11, 2001 and this is the best the Bradford Exchange could come up with to honor them. It looks like somebody slammed patriotic images, stock photos and clipart together in a particle accelerator. There's that terrible grungy flag in the background, the "Never Forget" slogan rendered in an ugly font with an ugly drop shadow, and that laughably sad banner plucked from some World of Warcraft guild's homepage. Also when is Patriot Day? I've never heard of this holiday and worry I'd miss out on my one legitimate chance to use this flag.

On the bright side, if you look behind those garish lasers blasting away at the heavens, you might notice the ghosts of our beloved Twin Towers haunting the New York City skyline. Clearly these towers are trapped in the spirit realm between our world and the architectural afterlife, probably due to some lingering guilt or baggage. Possible story line for Ghostbusters 3? We can only hope. 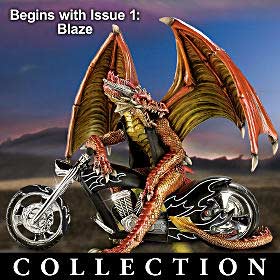 Little is known about this awesome figurine, other than the fact it promises to fulfill almost every conceivable human need. We all know that dragons can fly-- that's just empirical science-- but now we know they can also ride motorcycles and be extremely gay.

If you like gay motorcycle figurines, you might also enjoy the mysterious Dream On Down the Highway Native American motorcycle. Sure it kinda looks like a discarded prototype from Todd MacFarlane's rejected line of Pocahontas action figures, but it pays tribute to our wise Native American friends. Hopefully this stunning figurine makes up for all those smallpox blankets. 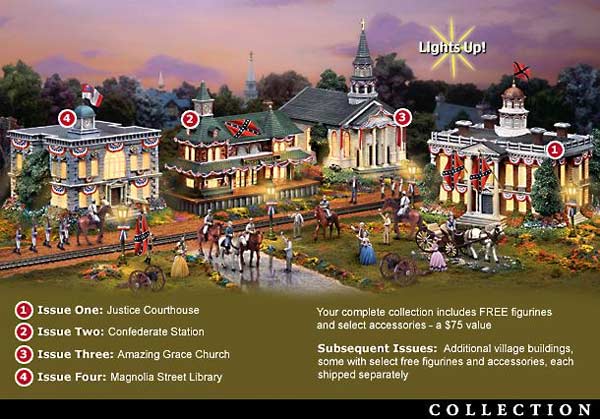 "Now you can journey back to the days when gentlemen took up arms to defend the South's honor."

Looking for a more casual way to express your racism? Why not try a miniature village. It might not feel as visceral as flying a flag in your yard or yelling a racial slur from your pick-up truck, but it's a delicate and satisfying way of showing your support for a group of backwards terrorists who fought for the right to degrade and enslave human beings. D'oh!

Although it's not the appropriate scale, and certainly a bit anachronistic, you might also enjoy sprucing up your Confederate Village with the menacing Stonewall Confederate Pride semi-truck. This is what Optimus Prime would look like if the Confederates had won. Possible story line for Transformers 3? We can only hope.