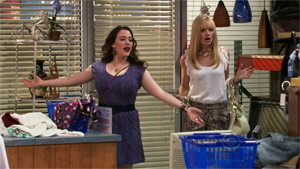 In the post modern era truth is devalued as an assertion of truth undermined by the power to make such an assertion. The truth itself is a pseudo-Nietzschean lie serving the will to power. So when Caroline and Max travel to Goodwill and a shirt is stolen from Max's basket, Caroline's accusation itself is perceived by Max to be a tool of Caroline to reassert the oppression of capital. Max cannot see the truth because of her prejudices.

It is a drama repeated frequently in mass media. In Transformers: Dark of the Moon you will see that Optimus Prime wishes to protect humans even at the expense of his fellow Autobots, while the Decepticons, now rallying to the cause of Sentinel Prime, perceive the destruction of humanity as necessary to the survival of Cybertron. Of course this is utopian nonsense, but it is possible to assert that this is the outcome most desirable while in control of the Pillars which allow Cybertron to manifest in ruinous proximity to earth.

But as we see, by dooming his own planet to destruction, and saving humanity, Optimus Prime descends into the brutality of a beast. He decapitates Megatron and executes Sentinel Prime who, from their perspective, were acting as saviors of their entire race. What could be more noble than that? Prime, argues a misreading of Hegel, is greater for sparing another species and sacrificing his own. Of course, nothing is more abhorrent than revolutionary ideology encumbered by morality. History is filled with this error. See Stalin and Hitler, their clarity of purpose occluded by the moral ideology they supposedly served. Prime has similarly doomed his race and the assertion of truth, the great lie of objective reality, has allowed him to become the fascist animal. Hegel, asserts Marx, must be permitted into every moment, every breath, or we will see only the lie we desire. But is there truth at all? Max learns the hard way that this is possible. She does not get her shirt. It is Lacan, not Marx, who wins again on 2 Broke Girls.

You can find more episode guides for 2 Broke Girls and other great sitcoms on Zack's Facebook.