Either way it's just a matter of time until the motherboard warps from the heat. You might as well let your Xbox break now and enter the dark world known as warranty repair hell that so many Xbox 360 owners, including myself, are now in. 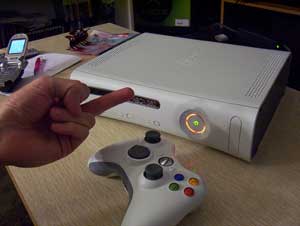 Damn dude, you sure did give that plastic box filled with electronics assembled in Taiwain inside of it what it had coming. Fight the power.Once you are in warranty replacement hell it is almost impossible to get out of it. When you send your Xbox back to Microsoft they attempt to repair it. If they cannot repair it they send a replacement, which is apparently a refurbished unit, i.e. someone else's broken ass Xbox that they managed to get working for 5 minutes before shipping it to you with UPS 30-day "I Think I Can, I Think I Can" delivery.

Your "repaired" console will undoubtably still suffer from the same ailment that plagues the rest of the Xbox's out there and will eventually break, probably before the week is over. This leaves you with one option. That's right, sending it back to Microsoft for another half-assed repair job. Legend has it that there are some Xbox 360 owners who have gone through up to six Xbox's in warranty repair hell. I even read about a guy who has been an Xbox 360 owner for 18 months, but for seven of those months his Xbox 360 has been on vacation at Microsoft's repair facility.

I'm not saying the Xbox-Scene guys are 100% correct in their diagnosis but they seem to be the only ones that have any answers. What has Microsoft's response been to all of this? Vice President of Interactive Entertainment Peter Moore thinks we're pretty damn lucky to be sold defective consoles by such a wonderful company.

He expertly dodged questions about Xbox 360 failure rates by spreading apart his buttocks and squeezing squeezing out this little gem, "What this consumer should worry about is the way that we've treated him. Y'know, things break, and if we've treated him well and fixed his problem, that's something that we're focused on right now. I'm not going to comment on individual failure rates because I'm shipping in 36 countries and it's a complex business." 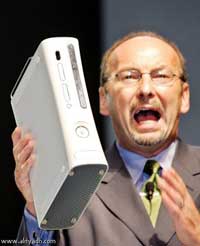 Peter Moore, proving that bad PR isn't just for Sony!We should be so lucky that Peter Moore has fixed our problem by making us spend six hours trying to get some Indian to agree to repair our defective launch day console for free so we can wait a month to receive an empty box that may or may not be sent back with a working video game system inside.

Some people know their UPS carrier by name already and he's going to be asking for a tip this Christmas. Are you going to tip this fucker for me Mr. Moore? Are you going to fix my problem you cue-ball headed jerkoff?! I DON'T WANT TO TIP THE FUCKING UPS MAN FOR DELIVERING THIS GODDAMN PEICE OF SHIT VIDEO GAME CONSOLE TO ME. 10-9-8-7-6-5-4-3-2-1. Breathe deep, breathe deep...

Once again the Xbox hardware nerds come to the rescue. Besides figuring out how to mod the 360 into a vibrator that'll allow you to please your fat girlfriend while not missing a second of that exciting Halo 2.5 beta currently going on, they have determined that the only difference between the new "Elite" version of the Xbox 360 and the current one is that Microsoft has coated the thing in an epoxy, possibly Crisco, that traps and kills heat where ever it breeds and allows the motherboard to warp at a much slower rate, rendering your console useless roughly two weeks after the warranty expires instead of one.

It seems that Microsoft has determined that a problem exists with their console but has decided to roll out a half-assed fix. Only time will tell if the Elite version breaks as much as regular ones.