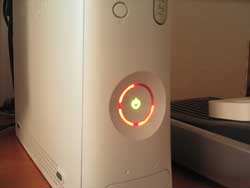 If your Xbox 360 doesn't look like this, well, you just wait then you smug prick.The Xbox 360 was released almost two years ago to much hype and anticipation. Microsoft's sequel to their first foray into the console wars managed to impress even the most jaded Internet asshole and made waves with a better than average launch lineup.

Who would have thought, a system worth playing right out of the box? Excellent original titles like Condemned and even a rehashed but well-executed World War II shooter made Xbox 360 owners out of those traditionally weary of buying consoles at launch. Many, including myself, decided to throw caution to the wind take the plunge.

Soon after launch reports began circulating that units were breaking down and presenting a red laser show on the "ring of light" display. Angry nerds rushed to embarrass themselves on Internet forums, caps lock already depressed, and proclaim they would never purchase another "Micro$haft" product ever again while Microsoft sycophants defended the software giant at all costs. Many people attributed these broken consoles to normal failure rates among new hardware.

Now it's a year and a half later and Xbox 360s are still "bricking" at an alarming rate. It seems that every Xbox-related forum you look at, someone is complaining about their broken 360 or the horrible repair process they must now endure.

360 owners with working consoles balk at claims that there is a design flaw and instead blame the user for mistreating their machine. That is, until their unit starts seeing red as well. While nobody knows for sure why Xbox 360s are breaking down, the community is searching for answers.

Apparently the Xbox-Scene nerds, who are enthusiasts or pirates depending on who you ask, have hypothesized that the heat generated during normal operation causes the motherboard to warp and because of pressure put on the motherboard by the heatsink clamp, the whole thing bends, severing the physical connections between the GPU, the CPU, and the mainboard.

Now I don't know what the hell any of that means. All all I know is that I can't play Viva Pinata right now, possibly because of it. If it is true, that means people who take better care for their console will be in a worse position than gamers who treat their console like they do their bodies. 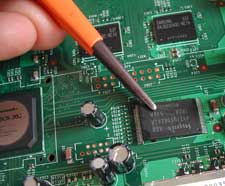 A hardware engineer points out the chip that makes an Xbox 360 break roughly 1 day after the warranty expires.Think about it. Johnny GameFAQs, who leaves his Xbox 360 on all day sitting on the carpet, turning it off only to violently lug it to his buddy's house where his friend proceeds to piss on it so they can film it and put their masterpiece on YouTube, will discover that his system breaks sooner than later, probably sometime within the 1-year warranty period. For his efforts he'll recieve a free repair or replacement.

Jimmy Games Forum Goon however, who has taken out several insurance policies for his collection of mint condition Radiant Silvergun and unopened Chrono Trigger boxes that he bought on eBay for roughly 100 times the cost of his dignity, takes impeccable care of his unit. Therefore his will last for a longer amount of time than the warranty covers, leaving him to either trash his 360 or fork over the $160 for a repair/replacement when it eventually explodes. How's that for a conspiracy theory, eh?