4) If you're foreign and don't speak English, ask your country when they plan on inventing "entertainment." I won't lie; I frequently enjoy looking at things. In fact, I use my eyes to view nearly 97% of all objects I see! However, I do realize the act of blankly staring into space may grow boring after a while. This is why I bring items like books, magazines, or handheld gaming systems with me on flights.

Now I have no clue if these forms of media are readily available to folks from random, severely foreign countries that routinely join and secede from Russia multiple times an hour. Maybe their homeland passed a law to punish people who read books by murdering half of their wives. Regardless, there is no justifiable reason for a human being to spend three solid hours blankly staring off into space, fixating on individual oxygen atoms or ghosts or whatever causes them to perpetually rotate their head around like a confused lighthouse of flesh and questionable fashion. 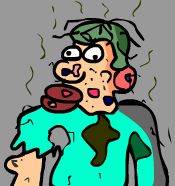 Join the open source Ron Paul furry movement!5) Stay at home if you're diseased or refuse to take showers. This rule might directly tie into the previous one if America didn't seem so intent on catching up with the rest of the world in the hotly contested category of "nauseating stench." It's easier to dismiss rotten, decaying foreigners covered under a blanket of spores by justifying, "well maybe they worship one of those crazy foreign gods who despises soap and water." You know, like L. Ron Hubbard (he's from space).

Such reeking relativism doesn't apply to Americans; if you can afford a plane ticket, you should logically be able to pay for enough soap and water to at least temporarily fend away the omnipresent specter of infected onions. If you're ever in a situation where you debate spending your cash on either a plane ticket to a Linux convention or investing in one of those "bathtubs" you've been hearing so much about, please do the intelligent thing and instead shove all your money (and any nearby office items) into your mouth so you can choke to death on it, thereby sparing the world yet another repulsive, mobile failure machine. Make sure to donate your odor to medical science.

A good test to determine if you smell like shit requires you to approach an unbiased member of the general public. Pretend to sniff the air a few times before adopting a very concerned look, then casually ask, "do you smell that?" If they respond "yes," then congratulations, you smell like shit! If they reply "no," then you still smell like shit since only maladjusted social deviants need to follow website instructions in order to discover if they're fantastically revolting.

Likewise, if you strongly suspect your body may be covertly transporting rare strains of wretched, infectious bacteria acquired during the night you attempted to fuck your neon blue 1987 Honda Civic, you might want to cancel your important business flight and stay home where the only living beings you can possibly infect are the colonies of throbbing fungus and bulbous deer ticks skittering across your apartment floorboards.

When passengers choose a particular seat on a flight, they do so based on an arbitrary number and prediction if they'll have to piss nonstop (in which case they'll request a window seat). No airline currently offers to ability to select a position next to a wretched human spore reeking like a stained box of dicks dunked into my grandmother's attic. Even if they did, I can't imagine many people besides Fragmaster requesting such a seat. Don't punish travelers mercilessly thrown into your gravitational pull by a cruel and uncaring airline system. Ask a neighbor to spray you down with a hose for a couple minutes to combat your constantly pulsating waves of rancid airborn bile. If that doesn't work, demand to wear a Haz-Mat suit the entire flight.

I hope these handy tips explain and clarify some of the more common air travel errors. Independent thinking might occasionally seem difficult and uncomfortable when the government isn't around to do it for us, so it comes as no surprise when members of the general public once again display their patented Complete Lack of Basic Common Sense (tm). Flying is a miserable experience capable of destroying sanity and corrupting innocent souls; let's do what we can to make things less horrendous for all involved. If you refuse, the next time somebody attempts to cram a gigantic, bloated bag into the overhead storage area, it might contain valuable parts of your anatomy, airline asshole.