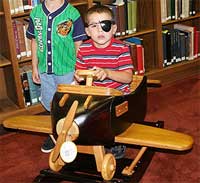 Nick Fury has a call on his cellphone... and he gonna take it!2) Keep your fucking job on the ground. If you work for a company attached to our planet (a business either on or below the Earth's surface), do all us other passengers a huge favor: leave your business there. Don't attempt to unpack several hundred pounds of business equipment onto your narrow, six-inch wide plastic tray. Believe it or not, you won't get fired if you fail to produce several 50-page dissertations on the art of selling your dumb-ass pontoon boats during a 40-minute flight to Atlanta. You'll get fired because you're an insufferable airline asshole who will never experience love.

The majority of businesses are located inside buildings for a distinct reason, primarily because the public doesn't want your company spilling over into their personal space. We demand your business be contained at all times, and if a rogue piece of business somehow escapes from your office and tries to flee for freedom, the anti-business minefield encompassing your office exterior must annihilate it. When I sit down to watch a quality DVD such as "Catman In Lethal Track" or "The Impossible Kid," I intentionally avoid inviting over 200 pounds of upwardly-mobile airline asshole to ejaculate quarts of Excel spreadsheets and Wall Street Journal printouts all over my couch and lap. As far as I'm concerned, the only person justified in doing their work during flight has an eyepatch, smokes a cigar, and pays for several $5 Miller Lights with his S.H.I.E.L.D. credit card. So next time you find yourself squeezed between two suits determined to convert the surrounding 30-foot area into their own private dickhead office full of pie charts and colorful college football chat, hand them a printout of this helpful image: 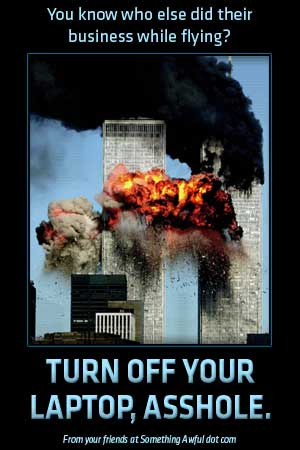 Nobody cares about the banal, excruciatingly moronic office politics affecting your ability to ship 300 pounds of fishing string to southern Nebraska. Instead of spending several hundred thousand dollars on a high tech future phone capable of syncing your bluetooth phone with your ragged hairpiece, consider investing in a microphone so you don't have to shout out each and every word of your entire conversation, broadcasting it throughout the entire area code. 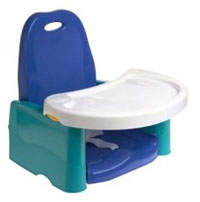 Artist rendition of what the average airline seat will look like in 2009.To solve the potential issue of crippling confusion, the activation of this neon sign invariably arrives accompanied by the voice of either the pilot or flight attendant adding something along the lines of, "we're about to experience some turbulence, so the captain is turning on the fasten seat belts sign. Please sit down and fasten your seat belts until the light is turned off." If you're one of the many, many people who interpret these two related events to mean "unfasten your seat belt right now AS FAST AS YOU CAN, RIGHT NOW, FOR GOD'S SAKE DO IT RIGHT THIS FUCKING INSTANT!!!" then I can only pray your flight experiences enough turbulence to repeatedly bash your skull against the ceiling until your brain transforms into a bloody shower of bite-sized chewy pieces.

Here's a little handy guide I jotted down during a recent flight, addressing a few of the more common questions and scenarios I witnessed:

At the risk of over-complicating things and blowing the internet's collective mind, I'd like to additionally explain the request, "please put your seat and tray table in the upright and locked position." This means, at that particular moment in time, you should STOP TYPING YOUR GODDAMN ENGLISH DISSERTATION AND PUT AWAY THAT STUPID TRENDY SONY LAPTOP YOUR DAD BOUGHT YOU, BECKY. It also means I KNOW YOU'RE OLD AND ABOUT TO DIE AND YOUR KIDS NEVER TALK TO YOU, BUT PLEASE PULL YOUR FILTHY CHAIR FORWARD LIKE THE AIRLINE ATTENDANT ASKED YOU TO DO REPEATEDLY, IN SEVERAL DIFFERENT LANGUAGES, NONE OF WHICH YOU UNDERSTAND BECAUSE YOU'RE AN ATROPHYING ABOMINATION.