Chapter 3: There Was A Tomorrow 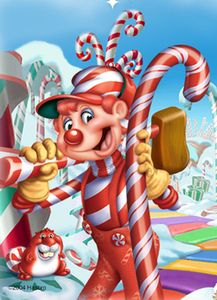 A bunch of different powerful candy-people fought over that one little red square where the temple was, and the gumdrops meanwhile were off in the corner wondering if maybe they should have chosen a different spot for their temple because apparently the tiny square in Candy Land they had chosen was the only damn square where anyone could talk to King Kandy. Then things begin to look up for them. They begin to look up in the following way:

One little group of candy hearts had created a delicious and powerful empire, and were now in charge of the little colored square of Candy Land where all the temples had been. This empire was falling apart into sugary little pieces anyway, so they gave the gumdrops back the spot where their temples had been, and told the peppermints they would have to share with them.

The gumdrops were cool with this idea because it meant they could hang out on the same little red square where their temple had been, and maybe the candy hearts would stop trying to kill them. It was also cool with them because it would piss off the peppermints, and the gumdrops loved it when that happened.

"Well, I think that pretty much did it," said the gumdrops. "I sure hope it'll be peaceful from here on out."

Chapter 4: The Revenge of the (Peppermint) Sticks

The peppermint sticks weren't going to take it.

"We're not going to take it," they said. 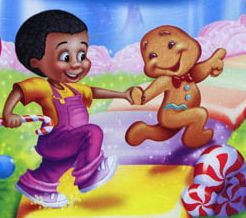 These groups didn't like the gumdrops and spent a lot of time figuring out the best way to take the red square back from them. Most of these plans involved killing a few gumdrops at a time, then hiding for awhile and declaring victory. Not surprisingly, this tactic did not work very well, but the peppermints kept trying it anyway. These groups also didn't like each other, and would sometimes fill the hours between killing gumdrops by having extravagant factional wars. This tactic worked even less well then the other one, but the groups didn't seem to care much as long as they were killing something.

The gumdrops got tired of being killed and so they went over to where the peppermints lived and knocked them around a little. Some of the peppermints they knocked around hadn't actually done anything, but neither had most of the gumdrops the peppermints had killed, so they figured that it all evened out in the end. The peppermints disagreed, but their method of expressing this was to kill more gumdrops, so the gumdrops didn't much care what they thought.