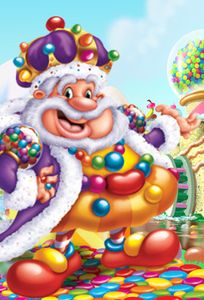 By now the rest of Candy Land had noticed this fight. Most of them were content to pick a side and root for it. Rumor had it that Gloppy the Molasses Monster even had a large bet with Grandma Mutt over the outcome, and was influencing it by supplying arms (and legs) to the previously limbless peppermint sticks. King Kandy, however, had begun to feel that it was time to end the fighting.

He brought the leaders of the peppermints and the gumdrops together in a place far away from the red square and asked them if they wouldn't just get along now. The gumdrops and the peppermints politely reminded him that he was the one who had told them to hate each other in the first place, and further politely requested that he just make up his damn mind for once. He responded by reminding them that he was the King and then he pointed at his crown and raised his eyebrows and just stayed like that until they got the message. The message was that he was the King and he was cool as heck, so they should do what he says.

Then one of the smarter peppermints remembered what they had just forgotten and said, "Hey, the King is the one who started all this! Let's get him!" The gumdrops and the peppermints were basically in the mood to attack stuff, and didn't really care what it was, so they happily obliged by advancing menacingly on the King.

"Oh dear," said King Kandy, and he tried to do the eyebrow raising, pointing at the crown thing again, but it didn't work. Then he saw the card that had brought all the negotiations back to the beginning still sitting on the table.

"That gives me an idea," he said, and picked it up.

Chapter 1: Back to the Beginning 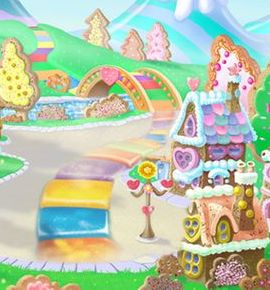 Candy Land was empty and peaceful. The path of colored squares snaked silently through the bubbling springs of syrup and beneath the gingerbread trees.

"Whew, that was a close one," said King Kandy. He hummed a little triumphant song. Then he hummed another one. He tried to hum a third one, but let it fade away halfway through. He was very bored, and like usual when King Kandy gets bored, he decided to set up a situation where there would be lots of killing.

So he created a chocolate cookie and a strawberry sucker, and drew a line on the ground between them. The two immediately begin arguing over who had the nicer rock candy formations on their side of the line. Then they started punching each other.

"I'll just make sure it doesn't get out of control this time," said King Kandy. He pointed at his crown, raised his eyebrows, and let out a booming laugh. "I'm the freaking King. Hell yeah."