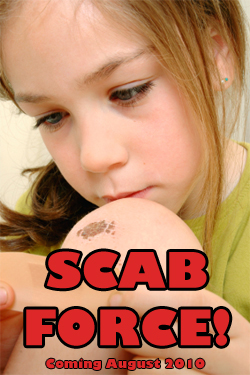 Those idiots at Cartoon Network are at it again with a -- Wait, no. I meanCartoonNetwork. Yes. YES. YES!

Those idiots atCartoonNetwork are at it again with yet another live-action programming addition that makes the very title of their station a complete and utter travesty in the eyes of any rational human being with a pulse. And with a name like Scab Force, you can bet that I punched right through my drywall when I found out this stinker had just been picked up for thirteen episodes. And that very same wall had previously been mended after I realizedCartoonNetwork would never respond to my proposal of running Windsor McCay's stunning Gertie the Dinosaur on a loop for three hours every weekday night.

Since it's hard to type with only one non-shattered hand, I'll letCartoonNetwork's own press release speak for itself.

Madison Albrecht (Splendora Cyrus) was just an ordinary girl... Until the fateful combination of a missing lunchbox and a skinned knee caused this third grade dynamo to realize that eating scabs can give her powers beyond her wildest dreams! Join Madison as she teams up with fellow scabbers Gibson (Sprecht Zane, Jr.), Finch (Sluggo Cyrus), and their trusty falcon, Winger, as they battle the evil Dr. Detention and realize good friends stick together like platelets! Coming this August: Scab Force!

I've got a six-pack of wine coolers in the fridge, and The Thief and The Cobbler ready to go in my DVD player. If I don't make it through the night, it was nice knowing you. 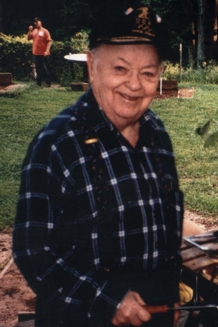 We at Animation Website would like to give our deepest condolences to the family of Flip "Flop" Gunderson upon his passing. While Flip isn't as well-known as some of the legendary golden age Disney animators like Frank Thomas and Les Clark, he provided a valuable service to the Walt Disney Animation Studios during his 60 years of service; as lead brush-washer, Flip carefully cleaned the brushes of talented Disney cel-painters when these tools became dirty. Unfortunately, some of his best work has been lost to the ages, with brilliant shorts like Our Friend Asbestos and Hooray for Segregation! being officially disowned by The Walt Disney Corporation due to their sensitive and dated subject matter.

Though Flip served what many would call a minor role at the Disney Studios, Walt mentioned Flip himself by name in a 1966 Playboy interview. Here's an excerpt.

Playboy: With all the tedious work that goes into producing an animated feature, do you ever make time for fun?

Disney: Oh -- oh yes. I've always liked to promote an atmosphere of fun and whimsy in my animation studio, and many of our staff members really know how to take the edge off of such an arduous process. Take our brush-washer, Flip, for instance. Now, the job of "brush-washer" isn't even a real thing in the animation industry -- ask around. We hired flip as a joke, just so we'd have someone to fuck with all day. He's had all manner of drawing utensils thrown at his head. Only took one sick day after Ward Kimball stabbed him repeatedly with the sharp end of a drawing compass. I slept with his wife. Repeatedly. An ugly woman, but boy oh boy did that ever make him cry. Excuse me for one moment.

Disney: Are you done torturing me yet, God!? Come down here and get me, you miserable bastard!

Rest in peace, Flip. Here's hoping Ward Kimball's stabbing you with a compass up in heaven. 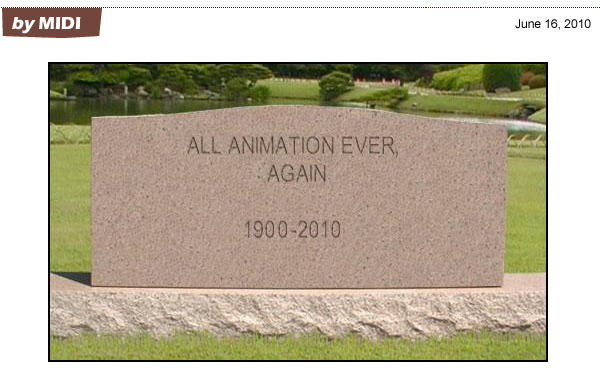