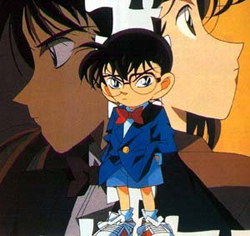 SEXUAL TENSIONUpon hearing the premise of Case Closed, most people would dub the show "beyond awful." This is kind of ironic, since Funimation is known mostly for their beyond awful dubbing. But these naysayers don't realize that the crimes solved by Lil' Conan and the Liability Krew are just as incomprehensibly stupid as the show's premise. The cases on the show mostly involve murders, with an inordinate amount of these murders being suicide-revenge killings, a crime that may only exist in Japan. Always remember that suicide is not a personal decision; your choice of death over life is always the fault of one specific person. Also, the murderers on Case Closed are never sociopaths, killing because of prime numbers or the wishes of characters on reruns of In Living Color; they always break down in confession when the accusing voice coming from slightly behind a detective's unconscious body points out what may possibly be the truth.
This is helpful, because an unwritten law of Case Closed seems to be "all crimes must be solved in under one hour while in the same room as the victim's corpse." The crimes aren't very hard for Conan to solve, though, since victims always leave him elaborate secret messages (for example, carving the killer's name in a series of drawers with a large sword) when their stupid, dying asses could have been getting life-saving medical attention. But only Conan can comprehend these messages, so you have to take his word for it when he states, "Aha! The spot in this specific square of the tablecloth relates to a position in the game of Shogi (Japanese chess favored by American nerds who think the addition of illegible characters to the game makes it superior), therefore showing us the location of the killer!" 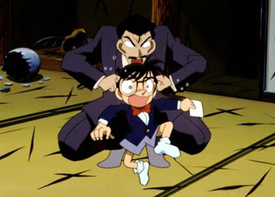 Those tiny shorts just provoke abuse.Now that all of the elements of Case Closed are in place, I will now give a synopsis of the episode "Jack Attacks," the ultimate episode of the series. It's been over two years since I've seen it, so you'll have to excuse me if I get a few details wrong; it really doesn't matter, though, since this episode has become oral tradition for me and a very select group of nerds.
The murder of "Jack Attacks" is of the revenge-suicide variety, but it gets much stupider than that. In the episode, an older man asks a younger man to house-sit for him, with the intention of murdering this younger man. The younger man (they had names, which are now lost to the mists of time) forced the older man's son into committing suicide in the past, but for some reason the younger man has amnesia and can't remember this. So, while house-sitting, the younger man gets a phone call from the older man, who asks if the younger man can put his dog on the phone. The younger man complies, and the older man gives his trained dog a message to gently shove the younger man down three steps; the fall breaks his neck and he dies. And while the episode confronts the controversial topic of using a dog as a tool for murder, it never once questions how much of a pussy someone has to be to die for a two-foot plummet inflicted by a dog nudge. Take a moment to think about this. Let it all sink in. Can I honestly make any more jokes about "Jack Attacks?" Anything I write will pale in comparison to the hilarity of the actual episode, which is my new comedy bible. I hope it will soon be yours, too. 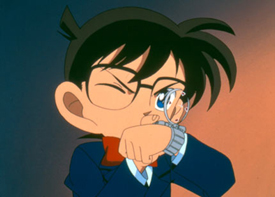 -_OMy Case Closed story ends on a recent, bittersweet note. A few weeks ago, I was dumb enough to purchase the Case Closed Collectable Card Game for the sake of pure novelty. Every time I walked into the nerd store, I noticed their supply of Case Closed CCG cards had not diminished in over a year. When I decided to voice this fact out loud, the man behind the counter desperately shrieked, "Half price!" For Conan, how could I refuse? My friends and I excitedly sat down for a game, and were struck dumb by the fact that the Case Closed CCG's Starter Set is unique in the fact that it doesn't contain the right cards for a single person to play, let alone a group of three. And the booster packs I bought yielded none of these necessary cards.
The bright side of this story - the proverbial "antidote cake," if you will - is that I wasn't disappointed. After all, shouldn't Case Closed be idiotic in its own special way, no matter what the format? Adult Swim viewers may have called you ugly, ridiculous, and embarrassing, Case Closed, but I know the truth: we just weren't ready for you.