We Deserve the Circus Afro We Get 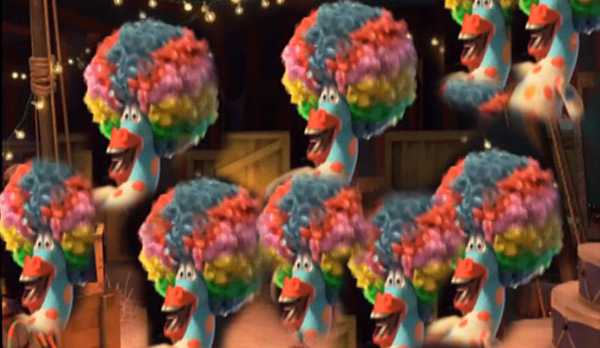 I spent sixteen miserable hours in the car this weekend and the only thing I could hear was the circus afro song from Madagascar 3's commercials. I have no interest in this movie. The song was not on the radio, it is inscribed on my brain like a prison tattoo of who I am going to murder when I finally fool them into giving me parole. Chris Rock, I'm going to climb in your vents and drop down on you. I hope you like eating your own severed ballbag because bon appetit, fucker.

DreamWorks' Madagascar 3 spent a second week as the most popular movie in the world. It once again beat out the dreary muddle of Prometheus - wait for the ultimate director's cut blu-ray where Ridley Scott figures out what he was really trying to say - along with appalling newcomers Rock of Ages and whatever the title is of Adam Sandler's current attempt to drain the dregs of comedy out of former SNL cast members.

Summer movies often plumb the depths of mediocrity; they are loud and gross and designed for the lowest of the lowest common denominator. Have you ever been at a grocery story and watched some slug-head spend minutes trying to open a produce bag only to watch him put one of those bins of trail mix into the bag? Revenge of the Fallen was made for that guy. If it's not an action blockbuster it is something loud enough and stupid enough to mesmerize a child from the back of a car's headrest. 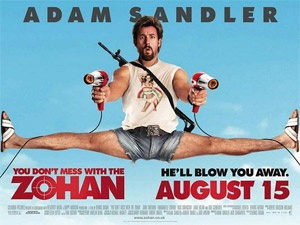 A while back I wrote an article about Adam Sandler's endless rivers of shitty movies. A few people emailed me pointing out that they make him money and "he's laughing all the way to the bank." I'm afraid they are right. I don't think Will Ferrell is the funniest guy in the world, but he tries. Anchorman pulled in $90 million. Pretty funny movie. You Don't Mess with the Zohan cost that much to produce and made $200 million. I would have thought the editors walked out of the screening room on that piece of shit. That is why I don't have a billion dollars.

According to America, You Don't Mess With the Zohan is the better movie. Adam Sandler sleeps on a nicer bed than Will Ferrell, he will leave more money to his kids, he will get more projects, etc. He is the funnier man. We will see more of him and everything he does.

There is nothing profound in the realization that money rules Hollywood. C.R.E.A.M. Money, our money, rules everything. All systems in our society are established to reward financial success over all else. The acquisition of money by almost any means is supposed to be self-evidently good. A literal representation of worth.

That this concept has spread beyond the realm of business is much more troubling. When you are trading commodities, or whatever made up fever dream hedge bets side fund paper airplanes they trade these days, a capitalist system like ours can theoretically produce the best outcomes. Theory often runs aground of reality, particularly outside the narrow confines of an exchange.

Zohan's success, the success of any of Sandler's movies, is may distill the awful truth of the marketplace, but it is not driving us towards quality. Not even the people who sat through that movie think so.

Greed, for lack of a better word, is fucking everything up. It doesn't work, because monetary worth is totally detached from actual worth. Take your shrinking income and spend it somewhere else. Please, for fuck's sake, please, stop seeing Madagascar 3. Keep your wallet in your pocket.

Or doom us to an endless loop of the circus afro song.

Hey, hold on there, don't put your wallet away just yet. Cast a monetary vote for the debut novel from Zack Parsons. Liminal States: it's better than Zohan.