The Kama Sutra by Vatsyayana 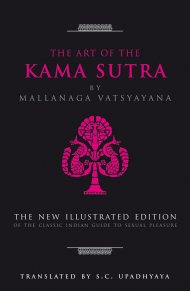 Men and women should drink in one another's houses. Nayikas,[32] therefore, are of three kinds, viz., maids, women twice married, and public women. (k). The woman whom I love is under the control of this woman. A woman turned out of caste.

A woman who reveals secrets.

A woman who publicly expresses desire for sexual intercourse.

A woman who is extremely white.

A woman who is extremely black.

A woman who is a near relation.

A woman who is a female friend.

Man is divided into three classes, viz., the hare man, the bull man, and the horse man, according to the size of his lingam.

When a man enjoys two women at the same time, both of whom love him equally, it is called the "united congress."

When a man enjoys many women altogether, it is called the "congress of a herd of cows."

ABOUT WOMEN ACTING THE PART OF A MAN; AND OF THE WORK OF A MAN.

Whatever is done by a man for giving pleasure to a woman is called the work of a man, and is as follows:-

A woman during her monthly courses, a woman who has been lately confined, and a fat woman should not be made to act the part of a man."

ABOUT THE WIVES OF OTHER MEN.

OF THE CHARACTERISTICS OF MEN AND WOMEN.-THE REASONS WHY WOMEN REJECT THE ADDRESSES OF MEN.-ABOUT MEN WHO HAVE SUCCESS WITH WOMEN, AND ABOUT WOMEN WHO ARE EASILY GAINED OVER.

In the case of an elephant woman, the thought that he is a hare man, or a man of weak passion.

The following are the men who generally obtain success with women.

Men well versed in the science of love.

Men acquainted with women from their childhood.

Men who have secured their confidence.

Men who send presents to them.

A woman whose children are dead.

A woman fond of enjoyments.

The wife of a man with many younger brothers.

A woman whose husband is devoted to travelling.

Kings. The company of loose women.

Powerful men, or men with interest.

Men who are free from any ties.

Men who hold places of authority under the King.

Men who consider themselves handsome.

Men who are always praising themselves.

A woman who has left her family.

A woman living on her beauty.

For enlarging the breasts of women.