What the FUCK Nigga A ROBOT?!?! YEOP

Holla At: 9 Pickles @ D Block on 2
Askin: What can a nigga even get on a robot? This shit is like 50 shivs worth of metal and lenses and shit
Niggas word: IS BOND (23 in last 3 months)

yo what the fuck is up dblock niggas???

That old rounder nigga Landline has done it again. He has hooked me up with a ROBOT. How many niggas in dblock, no, how many niggas IN THE WORLD have got theyself a robot?

Two, maybe three in addition to 9 pickles robot king of the dizzay bizzay. You know that nigga michael jackson up in abudoobi with some sheik got hisself a little robot friend. Maybe colin powell or that nigga barack obama got a robot. I give you maybe even my nigga shawn carter got a robot but just barely. Like its a remote control helicopter playin i, robot on dvd on a screen underneath it or some shit.

Ever since shit been gettin crazy Landline said wild ass shit been turnin up in maintenance and HVAC. Niggas on them work crew and janitorializing and shit come across all kinds of craziness. Nigga found an owl in a toilet, some kind of crazy book in one of the crawl spaces where the pipes is, and a fuckin rat with a persons face that screamed some shit in a high voice and ran off.

Best of all like I was sayin landline found this robot. It is in fair condition. I would say collectible if you want to get you some more robots and have a whole set. There was obviously an arm on the front that looks tore off and some sort of shotgun part, but only a little decal with how to take off and reload the shotgun, not the shotgun intself. 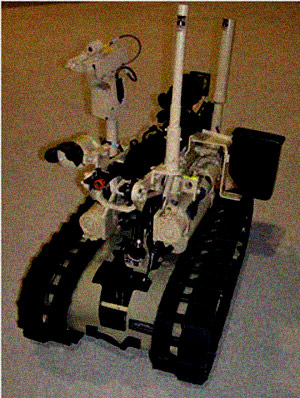 This shit is heavy, weigh like 150 pounds. If you flip it over it says NORTH AMERICAN PANOPTICON and underneath that it say LAMBSPOKE N-BLOCK and underneath that it say ARCS UNIT. There some other shit fucked up, like some scratches and the bottom part is all scuffed up like it got dragged somewhere, but if yall can figure out how to turn this lil metal nigga on I bet you shit would run around and do his shit.

So he good for that, if yall want to fix it up and make it go. I bet he could creep up on a nigger on his little rubber caterpillar shit and then shiv a bitch. If you aint need that shit you could just take him all apart and use the parts for shit.

I would do that shit myself, believe that, but I am too busy. With all them guards gone missing and the rest of them locked up in they little guard bunker and not comin out I got to work extra hard to keep my routes goin. Know what I'm spittin' nigga?

Yeah, you heard that shit. So check out this robot. Yall know you want this lil fucker.